WASHINGTON — When President Obama introduced his budget bill last week, he kicked off an annual process that should, according to well-established rules, lead to 12 spending bills on his desk before the end of September.

But that’s almost certainly not going to happen. Lawmakers tackle the federal budget every year and every year they mess it up.

But you can hardly blame them. While the process is clear, it’s also complicated, full of deadlines and committee votes and lots of places where it can go off the rails. Here’s an (admittedly brief) explanation of how the federal budget process is supposed to work, and why it so rarely does.

First off, the bottom line: how much money are we talking about here?

President Obama has proposed a $4.1 trillion budget for 2016, but only about $1.15 trillion of it — 28 percent — goes through the appropriations process described here. This is called “discretionary spending,” or funding for programs Congress deals with every year. Most of the budget goes toward “mandatory spending,” or funding for programs whose levels are already baked into the law (mostly Social Security and Medicare). 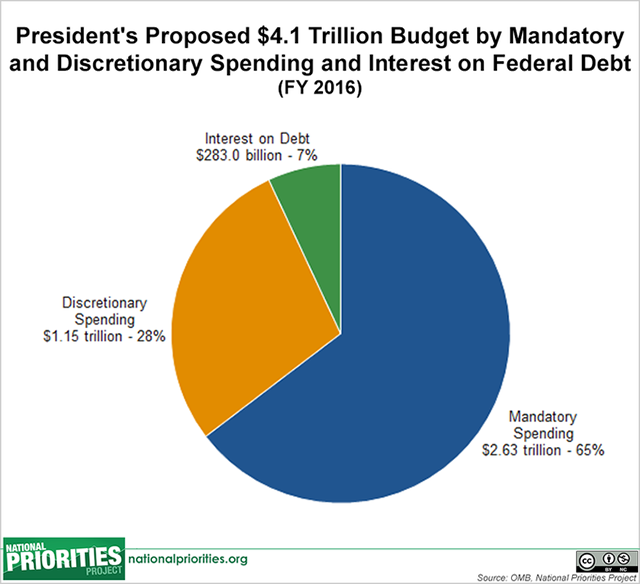 Okay, so how is it supposed to work?

In a perfect world, the appropriations process isn’t that much different than what’s supposed to happen to a normal bill: the House passes a bill, the Senate passes its own version, they work out the differences, pass the bill again and send it to the president for his signature.

There are a couple key differences when the budget is concerned. First, the president starts the process by sending his budget to Congress, usually in early February. President Obama did that on Feb. 2, and it’s how we know he wants to do things like increase transit spending or build more tribal schools. The document is basically advisory, indicating where the president thinks Congress should focus its spending.

Not that it really matters. Lawmakers can — and do — ignore the president’s budget. So Congress’ first job is to pass a budget of its own by mid-April. This budget takes the form of a resolution, a statement of Congress’ own spending priorities that does not have the force of law. To get there, the House and Senate both write and pass their own budget resolutions, establish a conference committee — a team of both House and Senate members — to merge them together, and then each body must again pass the final version.

The resolution never goes to the president — it just serves as a framework to guide the next step in the process.

So everybody’s said what they want, but when do they actually make the decisions?

By the end of spring, the real work on the budget begins. In the House and Senate appropriations committees, lawmakers begin poring over the 12 bills that make up the whole of the federal budget:

Each bill has its own subcommittee, whose job it is to pass their appointed appropriations bill, sending it to the full committee and eventually onto the floor for a full vote. These bills are supposed to conform to the overall spending framework already set in the budget resolution. 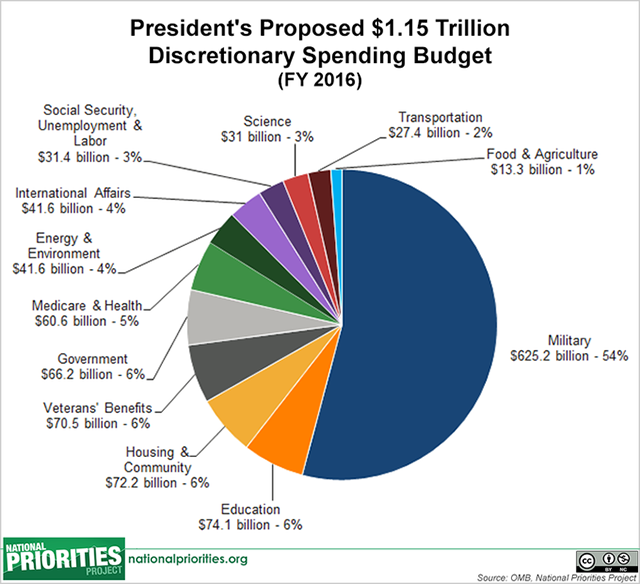 The House usually takes the first stab at this process. When it passes a bill and sends it to the Senate, senators can make changes and pass the bill again. Then Schoolhouse Rock kicks in: there’s a conference committee, the House and Senate pass the compromise bill, and the president signs it. Lawmakers are supposed to do this 12 times before a new fiscal year begins on Oct. 1.

So under normal order, passing the federal budget requires hundreds of votes in committees and in the full houses of Congress.

And how often does it actually happen like that?

The process breaks several times along the way. First, Congress is historically spotty when it comes to agreeing on a budget resolution — the last time it happened was in 2009. In fact, before 2013, the Senate had gone several years without passing its own budget resolution. That’s why Republicans would deploy the technically correct but misleading soundbite accusing Senate Democrats of not passing a budget for 1,000 or however many days — the Senate had indeed skipped the part where it sets internal spending targets, but it was still passing bills directing federal spending.

Without an agreed-upon budget framework, the House and Senate tend to go their own ways in appropriating funds, especially during times of divided government. That means critical steps in the process — like conference committees, or the Senate even voting on House-passed funding bills — simply don’t happen, especially for large or controversial spending areas. Last session, the House passed eight appropriations bills; the Senate didn’t vote on any of them.

If a budget isn’t in place by Oct 1, the start of the fiscal year, the government could shut down.

Congress avoids shutdowns by passing a short-term budget bill maintaining current spending levels called a “continuing resolution,” or “CR.” These give lawmakers more time to either write the 12 individual budget bills, or wrap them altogether in one overarching budget called an “omnibus bill,” which directs federal spending across all of the 12 appropriations areas.

Congress relies on CRs and omnibuses a lot. The last time Congress actually passed every individual budget bill was ahead of the 2002 fiscal year, and it took 8 CRs to get there first. Congress has passed its appropriations bills without needing a CR only four times since the 1977 fiscal year, University of Minnesota Congress expert Kathryn Pearson said, referencing a Congressional Research Service report.

Last year, Congress passed three CRs before agreeing to an omnibus bill covering the current (2015) fiscal year … and that was an especially odd one.

What was so weird about this year’s budget?

Around the time Congress needed to pass an omnibus bill, President Obama announced his immigration executive action, an order that the Department of Homeland Security would carry out. Republicans opposed the executive order, and they decided they could leverage the Homeland Security budget against it.

Overall, Congress has a lot of rules guiding how it sets spending, and it breaks them. All the time.

Does Minnesota get a say on the appropriations process?

Beyond the fact that every member of Congress votes on the funding bills, Minnesota has one member on the Appropriations Committee: Democratic Rep. Betty McCollum.

McCollum serves on the panels dealing with Defense and Interior spending (as ranking member on the latter). Each tends to have some areas of relative bipartisan cooperation (funding troops in combat zones, supporting tribal education, etc), but are not without their controversial points either. For example, Interior includes funding for the Environmental Protection Agency, and Defense is the largest area of federal discretionary spending, encompassing many of the fundamental disagreements over foreign policy right now.

Since its members controls the government’s purse strings, and thus have a big influence over policy, McCollum said the appropriations committee is “a very exciting committee to be on.” But as we’ve seen, the process is an undeniably messy one, and especially so today, and McCollum said aspects of it are frustrating for her and her fellow budget-writers.

What would McCollum like to change about the process?

McCollum said she’s going to be focused on rooting out “riders” — unrelated policy provisions lawmakers attach to budget bills that wouldn’t otherwise be signed into law on their own — while looking at the Interior budget: Environmental Protection Agency rules are likely to be in Republicans’ crosshairs this session.

There are two other aspects of the modern budgeting process she would change if she could.

First, she would reinstate earmarks, the process by which members would direct spending toward specific projects in the budget itself, rather than turning that power over to the executive branch. Policy-wise, earmarks gave lawmakers a chance to fight for local projects and debate their merits relative to other projects. Politically, earmarks encouraged cooperation during the budgeting process, though opponents might call it cronyism. Congress did away with earmarks in 2011.

Secondly, McCollum would undo sequestration, the ten years worth of spending caps Congress put in place in 2011. Sequestration lowers the amount lawmakers can spend across the board, which McCollum said hinders the process by limiting debate on individual aspects of spending bills.

Sequestration’s budget caps are malleable — in 2013, Congress voted to raise them slightly for a few fiscal years — and Republicans, now in charge of both the House and Senate, can decide to raise them again if they see fit. Obama certainly would if he could. His budget was $75 billion higher than sequestration caps allow. As the 2016 budget process begins, no one’s really sure yet how it will play out.

Has budgeting always been this hard?

Lawmakers instituted the current budget and appropriations process in 1974 to take back some spending power from the president, who had, at the time, abused it by exercising too much discretion in how he spent appropriated funds. But many of the problems plaguing the process today are symptomatic of moving it back to Congress in the first place.

It sets up an annual clash on spending levels, Pearson said, a problem that grew especially as power centralized with party leadership. Lawmakers began attaching riders to the bills, which led to vetoes and delays in the process, especially under divided government in the Clinton years. Pearson said no one has come up with any serious reforms to help speed the process along.

“It’s become so routine that there’s sort of no hope going into the process that they’re going to follow the schedule,” she said.