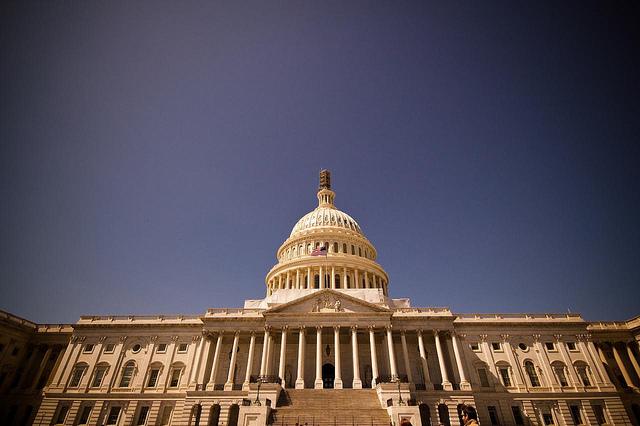 WASHINGTON — For more than two hours before Democrats formally blocked a human trafficking bill for the third time on Wednesday, Sen. Amy Klobuchar held the Senate floor and read a book, protesting the political debate that has stalled work on the bill.

Klobuchar’s speech came as she led Senate Democrats’ floor debate ahead of the vote. She invited other members to speak with her, but she was alone until soon before the Senate’s vote, working her way through parts of Nicholas Kristof and Sheryl WuDunn’s “Half the Sky,” a book on international sex trafficking.

“I just decided after being somewhat disgusted by all the anger that I’ve heard in this chamber that maybe I would just starting reading from this book,” she said during her speech. “When my colleagues want to come down, I welcome it. But I only ask them one thing, that if maybe they could just consider the issue at hand and stop all this vengeance and anger and then maybe we will have an opportunity, if we stop throwing darts, to get this done.”

Klobuchar is the lead Democratic co-sponsor of the Justice for Trafficking Victims Act, a bill written by Republican Texas Sen. John Cornyn that would use fines and assets from convicted human traffickers to establish a fund for victims. Republicans included — and Democrats say they missed — a provision prohibiting using funds under the program for abortions, sparking a nasty political fight and marring a bill that, without the provision, would likely have passed unanimously. A Klobuchar official told the Associated Press on Tuesday that an aide in her office had seen the language before a committee approved it last month, but didn’t warn Klobuchar or other Democrats about it first.

The fight has paralyzed the Senate for more than a week, delaying a vote on Attorney General nominee Loretta Lynch, an issue Klobuchar mentioned throughout her Wednesday speech.

The rancor in the Senate is in sharp contrast to the way the House passed a slate of sex trafficking bills in January, when Republicans and Democrats held joint press conferences hailing the effort as a bipartisan victory. Rep. Erik Paulsen, a Minnesota Republican who sponsored several of those bills, suggested the Senate take up the House’s version of the legislation, which didn’t include the abortion language, to defuse the fight.

“Democratic Senate leadership is probably still struggling over being in minority status, and probably thinking of ways to, how do they makes changes in legislation,” he said. “I don’t know, there are some of those issues going on probably, and then the Republicans dig in, and it’s just a back and forth, it’s politics as usual.”

Behind the scenes, lawmakers are looking for a way to break the impasse, but nothing has emerged yet, even as Republicans have tried three times to bring the bill, with the abortion language attached, to the floor for a vote. Klobuchar’s Wednesday speech — part a book reading, part an appeal for the Senate to work together — was her most public display of frustration over this process yet.

“People should focus on the issue at hand instead of partisan fights that have been going on.” Klobuchar said midway through her speech. “I think this institution is better than what we’ve seen the last week.”

By Wednesday afternoon, Klobuchar was back on the floor reading her book. She said she would move on to a new one on Thursday.