WASHINGTON — In November, after Republicans’ big showing in the mid-term elections, this was how Sen. Amy Klobuchar handicapped the new Congress’ potential for getting things done:

“I take the Republicans at their word. They say they want to move on things. I’ve talked personally to Sen. [John] Cornyn, who’s in leadership there, and he’s devoted to this. I talked to Sen. [Mike] Lee yesterday about potential rules moving forward. I think there is some opportunity here. We will know, probably, within three months if it’s real, but I think there’s opportunity.”

That three-month mark has almost passed, and it’s been a turbulent time so far for Congress, with a near-shutdown of the Department of Homeland Security, growing, bitter angst over foreign policy, and abortion politics sinking a bipartisan sex-trafficking bill and delaying a vote on a major Obama administration nominee.

But lawmakers point to signs of progress, like last week’s breakthrough in the House, where lawmakers overwhelmingly passed a bill fixing the annual problem of potential payment cuts to doctors under Medicare (the “doc fix” or the “sustainable growth rate”), something members praised as they left town for a two-week recess.

That was the mood when I asked the delegation to take Klobuchar’s timeline for progress and diagnose how well this Congress is governing three months in. Their perspectives range the spectrum from cautious optimism to resigned indignation: 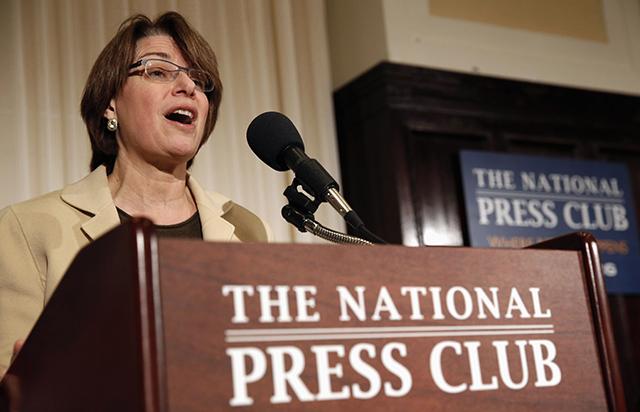 We have made some progress but it is much slower than I would like. I’d say the probably shining light in these first three months was the sustainable growth rate deal. That was something that for Minnesota is just critical. Franken and I were two of just a handful of Democrats to vote against the temporary fix last year as a protest, basically laying down the gauntlet that we were not going to vote for this again unless it was fixed. That is actually a surprising result, that that agreement was reached.

I’d say that was a positive, I think getting the Homeland Security funding done was a positive. We saw the kind of pushback against the extremists who were trying to put the immigration provision on. I think what has held us back is some of the extremism, and I use the example of Loretta Lynch, the attorney general [nominee], that it has taken so long to get her confirmed, when she’s only going to be in for a year and a half, and a number of the people who are opposing her have been complaining about [Eric] Holder from day one.

There has been some progress, especially from the last deal, but it has taken too long. I think it is somewhat predictable that there would be some of the Tea Party extremism issues going on, but I’d hoped that they would be slightly more in check than they have been. 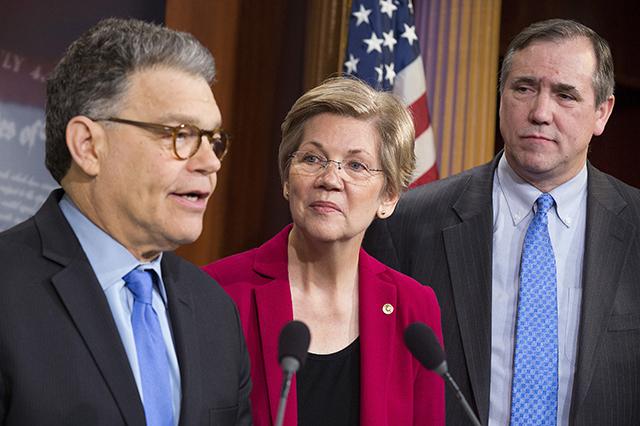 I don’t know if we know yet.

Obviously the Lynch nomination taking so long to get to, that letter, I think both Congress inviting [Israeli Prime Minister Benjamin] Netanyahu here without talking to the president or the State Department was kind of bad form, and the letter to the Iranian mullahs, I found kind of shocking. …

I don’t know if it’s the worst I’ve seen before. This hasn’t been great, we’ve had shutdowns, we’ve had a lot of discord before, but right now, it hasn’t been promising. But I have optimism in some areas. We on the [Health, Education, Labor and Pensions] committee are looking to reauthorize [the Elementary and Secondary Education Act] and thus far … the process seems to be one that I have some cause for optimism that we’ll get to try to do a bipartisan mark-up of the bill … I have some hope in [Chairman Lamar Alexander’s] leadership style that we will have a productive mark-up.

I would say that I think there’s potential here. I am hopefully optimistic. I know the bar’s not that high, when we avoided a shutdown of DHS, but we did it. I would say we found a bipartisan compromise to move a bill on veterans. We did the terrorism insurance, and the reason I think today I’m even more so optimistic is, we did something that I didn’t think I would see while I was in Congress, a permanent fix to the sustainable growth rate on Medicare.

I think this is a Congress that has potential at this point, and at a few times has actually lived up to it a little bit, what I was hoping would happen, when you’ve got split government. We’ll see how the Senate responds, but it sounds like there’s some ability to talk the folks that are not interested in government off the ledge, or at least marginalize them and put what’s right for the public forward. 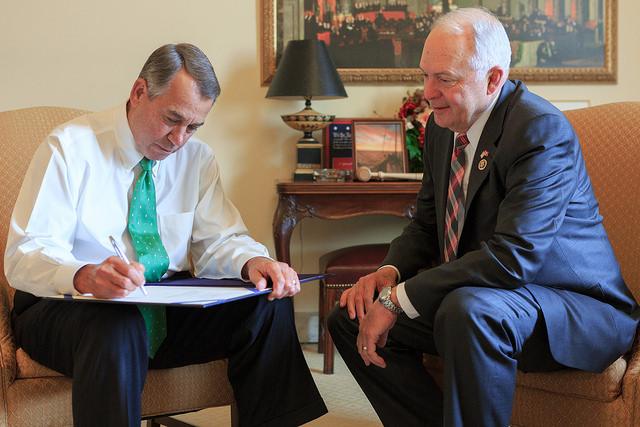 I think we got off to a very, very rocky start, we ran into problems. I think we’re still in a pretty tough place. I think the House, even though we’ve had some internal debate inside the Republican conference and probably inside the Democrat conference, this week was a really good week and showed we could get some stuff done and get bipartisan stuff done.

Budgets are never bipartisan, but we were able to work one through, which we think was a good blueprint, and the bill we were talking about, on the SGR and Medicare, was a very solid bipartisan effort. Now the Senate, they’ve been able to do a couple things, they passed the Keystone pipeline, they were able to do the Congressional Review Act on the NLRB’s ambush elections, but by and large, Senate Democrats have been able to hold as a bloc, so they haven’t been moving stuff…

I think the jury’s still out.

Number one, there have been some stumbles, right out of the block. From my perspective, I just want to get some things done, I think we can get some more things done. The trafficking bills that are hung up in the Senate right now, I think the easiest thing is just moving House bills, that will happen.

The good news is, this is a big week for us … The most substantive legislation we will take up, which is a major win, this permanent doc fix. Passing that will allow us to do other health care initiatives, rather than doing this short-term, fix after fix after fix. That’s really important for Congress, I think, to get that under its belt, to show you can do long-term solutions.

The three-month mark will be a lot better after we pass that, versus looking back for the last two and a half months.

Rep. Betty McCollum (in a statement):

The first three months in any Congress is more about posturing than real governing. I am optimistic, mainly because behind the scenes it is clear to me that there is a group of Democrats and Republicans who all want the same things — to be sure that government responsibly meets the needs of the American people.  When we focus on our shared agreement towards those goals, we can tackle big policy challenges. 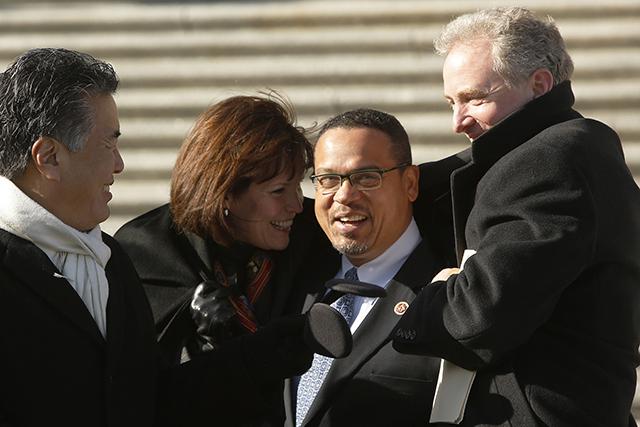 I think the governing of this Congress has been abysmal … We really have not done anything productive. Republicans’ repeated attacks on government are reflected in the fact that they have a lot of contempt for it and they don’t do it very well. They’re not good at governing, they can’t pass anything and important things that Americans need are going unaddressed.

What are we doing on infrastructure? Nothing. What are we doing on jobs? Nothing, they complain that even though Obama’s presided over many, many months of private job growth, they still criticize the economy. And there’s still criticism to be made on the economy, but what are they doing to address it? Absolutely nothing. What are they doing on immigration? Nothing.

There is no important issue that Americans are facing that Republicans are addressing. They simply have failed, utterly, at governance.

The last couple of weeks, on the House side, it’s starting to come together. Within the Republican conference it’s been interesting to get to know the different perspectives … As of yesterday, I saw some very interesting evolutions, people getting used to each other.

Now it will be interesting to see how the next three months go. It’s almost like people feeling out, not only where they are, but where everybody else is and how they can actually move what they believe in. Frankly, some people are more interested in stopping the things they don’t believe in. …

For me, the sky is still blue and the glass is half full.

I think they’re actually doing better than I expected. They went through this thing on Homeland Security, but it got worked out. Now, for [Speaker John Boehner] and [Democratic leader Nancy Pelosi] to put this [doc fix] thing together, and for him to take on his right-wingers and for her to take on pro-choice, I think that’s a pretty big deal.

It’s certainly a better start than I expected. 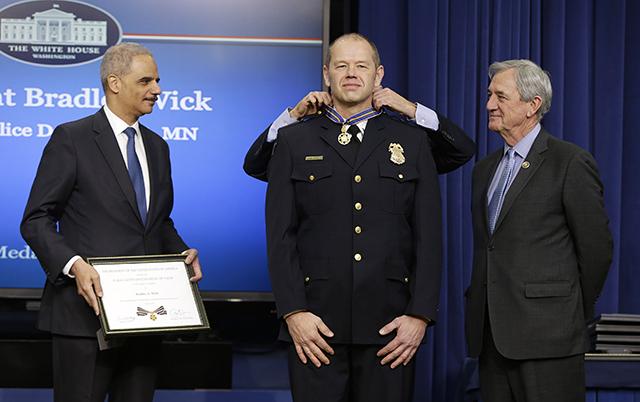 It’s not governing well, and it’s hard to imagine because the last Congress is one of the most unproductive in the history of the country. I’m still hopeful that this Congress will get its act together and start conducting itself under open rules and regular order, because that’s where common ground and bipartisanship comes from, that’s how you get things done…

We’ve had a couple of wins, and the Democrats have obviously been agitated of being shut out by the process. … You know the old saying we have in the country: With all this manure we’re going to find a horse somewhere. I remain optimistic that we can find a way to restore regular order and in the process, find common ground and see some bipartisanship to get things done.

I haven’t given up yet.