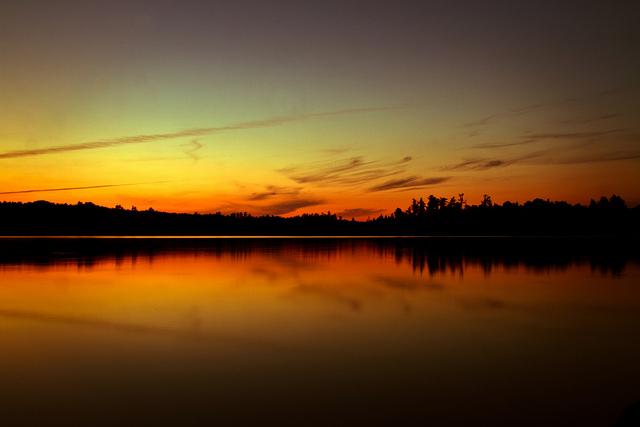 CC/Flickr/Alan Strakey
“Water knows no boundaries,” McCollum said. “It’s great that we have buffer zones, but we can’t tell a water-soluble toxic material, oh there’s a buffer zone there, stop. And that’s why you start looking at the watershed and the hydrology on how to protect the water.”

WASHINGTON — When it comes to controversial mining projects in Minnesota, the headlines go to PolyMet, the proposed copper-nickel mine near Hoyt Lakes that became a touchstone in last year’s elections.

But one group of Minnesotans is taking on a bigger foe — and a bigger mine — miles to the north, and they have found an ally in the state’s congressional delegation.

A group called the Campaign to Save the Boundary Waters is working to convince the Obama administration, and eventually Congress, to take steps to block the proposed Twin Metals project, and indeed any precious metal mining in a vast swatch around the Boundary Waters Canoe Area Wilderness.

The group’s director, Becky Rom, was in Washington last month with a group of scientists and a stack of environmental studies, polling data, and economic reports meeting with administrators and members of Congress. Her message: the watershed surrounding the Boundary Waters is territory too precious to allow copper and nickel mining projects that present a set of environmental complications unique to the area.

Congress has previously protected thousands of acres of land surrounding the Boundary Waters and Voyageurs National Park from mining interests, and the Obama administration has the right to do the same on its own, at least temporarily. Rom’s goal is to convince both Congress and Obama that the land straddling the BWCA is worthy of protection, and Democratic Rep. Betty McCollum announced Tuesday that she will introduce a bill to do just that.

“Here the choices are pretty clear,” Rom said. “It’s not difficult. It really is a pretty stark choice about our future and what’s important to people.”

As currently envisioned, Twin Metals would be a large underground mine located about seven miles southeast of Ely. The project would employ 850 people and produce up to 50,000 tons of copper and nickel ore a day. The mine could operate for up to 30 years. (PolyMet, a project much further along in the regulatory process, is smaller, and much further away from an area as environmentally sensitive as the Boundary Waters watershed.) 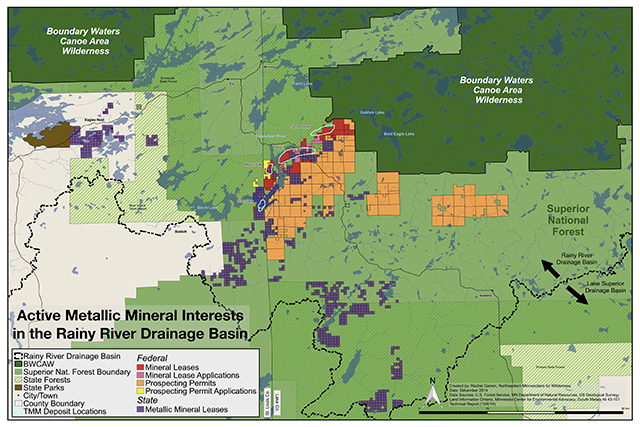 Like PolyMet, the Twin Metals mine would use a mining process that extracts metals by stripping them from surrounding rock. The waste rock then has to be stored offsite.

Storing the spent rock is contentious: exposed to air and water, leftover tailings could produce sulfuric acid, which Rom and others worry could leak into the Rainy River Drainage Basin.

It’s a process vastly different from iron ore mining, an industry that has defined northeastern Minnesota for generations.

“It’s all about knowing and understanding the regulations up front and designing our project to meet those regulatory standards,” he said. “If we don’t, we don’t get approved to move forward.”

Rom’s concerns aren’t solely with Twin Metals. It isn’t the only company considering precious metal mining in the region — maps of the area are dotted with permits for mineral prospecting around the Twin Metals site — and Rom questions the safety of the mineral extraction process itself, something her group says has led to acidic leaks at other mines around the country.

And besides, Rom said, even though the mines themselves are underground, the industrialization that would come from them could damage the aesthetics of the area.

“We’ve accepted this Mesabi Iron Range landscape,” she said. “Every one of those blotches is a permanent feature on the landscape. … We have to decide if we’re willing to let that happen all around the southern boundary of the Wilderness.”

Rom has decided she is not willing to let that happen. Her group has commissioned pro-BWCA polls of Minnesotans and written environmental and economic studies based around mining’s impact on the region’s ecology and economy. Now, the group is pushing a three-pronged approach in Washington to stopping it.

First, the company that owns Twin Metals is in the process of renewing its lease on the land it hopes to someday mine. Rom’s group has asked the Bureau of Land Management, which is charged with approving the leases, to deny renewal on environmental grounds.

Secondly, Rom’s group wants the Obama administration to unilaterally ban mining on lands south of the Boundary Waters — not just Twin Metals, but the whole area. That sort of declaration has happened before: in 2012, then-Interior Secretary Ken Salazar removed 1 million acres of federal land around Grand Canyon National Park from a mineral leasing program, effectively banning uranium and other mining activities there.

“There is precedent,” Rom said, “but it is courageous and it’s visionary.”

And it’s also only temporary. Twenty years after the administration’s actions, the lands are put back into the mineral leasing program, unless Congress steps in to remove them permanently. And for Rom, that’s step three.

Rep. Betty McCollum plans to introduce a bill later this week that would ban new mining on federal land in the Rainy River Drainage Basin around the BWCA. If enacted, the bill would allow mining activities on existing mineral leases (such as Twin Metals’, if they are to be approved by the BLM, something McCollum said he doesn’t want to happen), but with stricter federal oversight. It would also ban future mining leases throughout the area.

McCollum shares her goals with Rom: protect Northern Minnesota waters from any potential ill from a new form of mining.

“We are watching what is going on in the world, and even in the United States, with water becoming a resource that people are realizing needs to be protected and managed,” she said. “We know now we cannot take the water for granted.”

Congress has a history of protecting lands around the Boundary Waters. In 1964 and 1978, lawmakers enacted mining-free lands to the west of the BWCA. The state followed up with a similar buffer zone in 1991. McCollum’s bill would expand on those to cover much of the federal land in northeastern Minnesota.

“Water knows no boundaries,” McCollum said. “It’s great that we have buffer zones, but we can’t tell a water-soluble toxic material, oh there’s a buffer zone there, stop. And that’s why you start looking at the watershed and the hydrology on how to protect the water.”

Those buffer zones are among the reasons McFarlin says Twin Metals and the Boundary Waters can coexist. Mines there will open only if they conform to existing regulations, and McFarlin said Twin Metals isn’t looking for loopholes or relief from those regulations.

“The premise of the scenarios that are laid out in terms of harming the Boundary Waters or Voyageurs … do not acknowledge the existence of the regulatory standards or the regulatory enforcement mechanisms at the state and federal level,” he said.

Politically, it’s unlikely McCollum’s bill will find much support in a Republican Congress. Even some Democrats might defect anyway, including those from Minnesota, where many DFLers have a tendency to support mining, or at least the processes that determine its environmental safety.

U.S. Rep. Rick Nolan, who represents northeastern Minnesota, is among them. Asked about efforts to block mining in the area — but not McCollum’s bill — Nolan said, “I believe we have the brains and the technology to do both” mine and protect the environment.

Beyond their obvious opposing viewpoints on the relative merits of Twin Metals, McFarlin said he’s against the approach that Campaign to Save the Boundary Waters is taking now. Asking the government, be it regulators or Congress, to block any mining at all near the BWCA precludes any projects from going through environmental review or a public comment process. It’s “contrary to good government,” he said.

But in a way, that’s what Rom wants: a declaration that there are some places where any mining at all should be off limits, the watershed of the BWCA among them.

“If you wait until leases are in place and a mine plan is fully fleshed out and developed, and then you start a review of that mine plan, you’re no longer having a discussion of whether a mine is appropriate in this place,” she said. “What we’ve learned is that when you have a very important area of national significance that is threatened by a particular inappropriate activity, that your campaign is about that special place. Our goal is no sulfide ore mining in the watershed.”

This is Devin Henry’s last story as MinnPost’s D.C. correspondent. You can keep up with him on Twitter: @dhenry

McCollum seeks ban on new mines in much of northeastern Minnesota