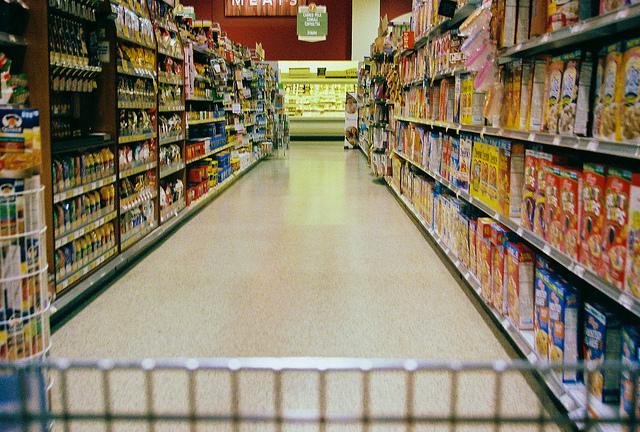 CC/Flickr/Stephenie Schukraft
Under the House bill, companies can choose to put U.S. Department of Agriculture-certified labels on their products identifying them as GMO or non-GMO.

WASHINGTON — After years of staying out of a contentious debate, Congress came closer to passing policy regarding the labeling of genetically-modified foods for the first time ever. On Thursday, the House of Representatives voted to pass the Safe and Accurate Food Labeling Act, which would establish a national, voluntary, federally-administrated standard system for the labeling of GMO and genetically engineered foods.

Critically, the bill would prevent states and localities from passing their own mandatory GMO labeling laws — a central point of contention that lawmakers, interest groups, and activists have focused on. It would invalidate the laws of states like Vermont, for example, which passed a mandatory labeling statute last year.

The Minnesota legislature has considered labeling bills before, but none have become law. Bills in the House and Senate were introduced during the last legislative session but didn’t go anywhere.

Supporters of the bill, which was introduced by Rep. Mike Pompeo, R-Kansas, claim it targets these local laws in order to eliminate inconsistency in labeling standards from state to state, or even city to city. 7th District Rep. Collin Peterson, the top Democrat on the House Agriculture Committee, backed the bill after being on the fence. He called the difference in local laws an “unworkable scenario” that creates confusion for farmers, companies, and consumers. The bill, he said on the House floor Thursday, “doesn’t get to where some people want, but it’s a workable solution that people should support.”

Food industry interests were active in shaping the regulations. According to lobbying disclosures, 51 interest groups worked on it, including Minnesota companies like Land O’ Lakes, General Mills, Hormel, and Cargill. Mark Klein, a spokesman for Cargill, said, “We view this through the lens of food security and the implications for food costs and supply disruptions that a patchwork of state requirements would create. We’ll continue to talk with lawmakers, customers and others as this proposal moves ahead.”

The labeling bill passed with support from members of both parties, though Democrats constituted the overwhelming majority of the no votes. Democrats Tim Walz and Betty McCollum, along with the three Republicans in the delegation, joined Peterson in voting yes. Reps. Keith Ellison and Rick Nolan voted no.

The issue of GMO labeling — and their use more broadly — is deeply divisive nationally. On the House floor, members engaged in heated debate over the safety of genetically modified foods and the role states and cities should play in labeling. Many Democrats took to the floor to question the safety of GMO foods — something Walz wasn’t buying. “I respect their worries but the science isn’t there with them,” he said. “You can’t have it both ways…If you’re frustrated that people don’t look at the science on climate change or vaccination, you don’t get to reject it.”

Consumer and environmental activists are deeply passionate about labeling, and an organized movement has emerged in recent years. In Minnesota, Heather Flesland coordinated opposition to the bill for a group called Right to Know Minnesota, which pushes for labeling laws. She says her group has gotten hundreds of Minnesotans to call and write to all eight representatives, urging them to vote no.

Flesland and other activists have characterized the bill as a creation of agricultural interests — its elimination of local mandatory labeling standards is strongly backed by the food industry. In the activist community, the bill already has a catchy alternate name: the Deny Americans the Right to Know Act, or the DARK Act. “This was basically written in partnership with some of these larger companies, like Monsanto,” Flesland says. “You look at someone like Collin Peterson, who has gotten the maximum donations from Monsanto, you can see that money trail.”

Beyond prohibiting local and state labeling laws, opponents of the bill take issue with what they see as a weak labeling system under the law. It would allows companies to choose put U.S. Department of Agriculture-certified labels on their products identifying them as GMO or non-GMO. Critics like Flesland doubt that any companies would voluntarily label their products as GMO.

The bill’s supporters feel that it’s been mischaracterized by a zealous opposition. They point to things like the bill’s provision for mandatory federal research of newly engineered organisms in making the case that it’s a step forward for consumer safety. They’ve also argued that strict GMO labeling laws — like the one passed in Vermont last year — would create confusing loopholes and raise prices on consumer goods. Those arguments — amplified by a powerful flow of cash from the food and ag industry — helped defeat similar GMO labeling laws on the ballot in California, Oregon, and others in recent years.

McCollum, speaking shortly after the vote Thursday afternoon, emphasized that the bill isn’t perfect. “This is only the first step and I want to move this progress along, she said.” McCollum was singled out by Minnesota Right to Know’s Flesland, who said she was disappointed the St. Paul congresswoman supported the bill. “If I vote to kill [the bill], I vote to stop discussion,” McCollum said.

“I have a lot of questions, a lot of concerns with this bill,” she said. “But I want to get to a point where any consumer can pick up a label and have confidence when they read that label that they know what’s in it.”

The bill now heads to the Senate for consideration — where activists say they’ll fight it just as hard.