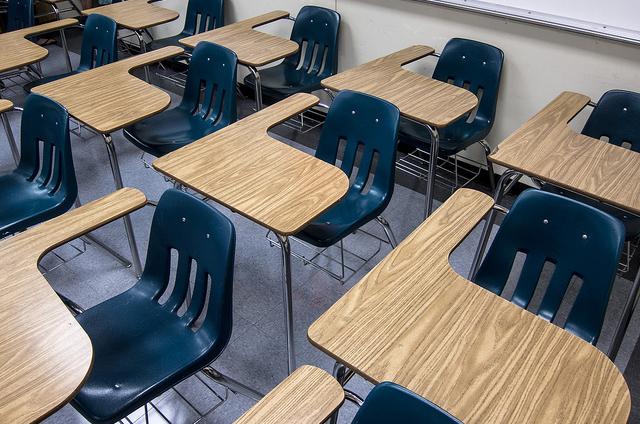 CC/Flickr/Robert Couse-Baker
Since its passage in 2002, the No Child Left Behind law has been the centerpiece of the federal government’s funding and policy approach to K-12 education.

WASHINGTON — 2nd District Rep. John Kline has been chair of the House Committee on Education and the Workforce since Republicans took over that chamber in 2010. But it’s only now, in his fifth year in the position, that he’s taking on the biggest piece of education policy of his career: reforming the Bush-era No Child Left Behind law, the centerpiece of the federal government’s funding and policy approach to K-12 education.

Passed in 2002 with strong bipartisan support, No Child Left Behind was a cornerstone of President George W. Bush’s domestic agenda. A re-write of President Lyndon B. Johnson’s landmark Elementary and Secondary Education Act (ESEA), NCLB sought to use a rigorous regimen of federally-mandated standardized testing to bolster accountability for schools, teachers, and students, and use the results to improve performance across the board.

After 13 years, that approach has delivered mixed results at best, and its various elements have managed to offend people across the political spectrum. Congress has attempted to move on NCLB reform before, but in absence of a hard deadline — the law’s provisions have been automatically extended since 2007 — political forces have stymied it.

But Kline and fellow GOP leaders think things are different now. With Republicans in control of both houses of Congress, momentum to replace the unpopular education law is stronger than ever. Still, there are plenty of obstacles and constituencies to appease — not to mention the Senate and the Democrat in the Oval Office.

If Kline and Republicans manage to push out a bill that gets President Obama’s signature, it’ll undoubtedly be Kline’s biggest achievement as committee chair. But if the bill is vetoed, or if Republicans buck him, it will be a high-profile defeat for the seven-term congressman.

Kline’s task here is not an enviable one. On one hand, his Republican Party is eager to seize this opportunity to curtail the role of the federal government in education, and broadly align education policy with conservative principles. Even though it’s a signature achievement of the last Republican president, NCLB, with its testing mandates and delegation of authority to the federal government, has grown deeply unpopular within the post-Tea Party GOP. Debate about the proper role of Washington in school policy has also been re-energized by the introduction of the Common Core education standards, and conservatives have been insistent on rejecting legislation with even whiffs of “federal standards.”

Kline and GOP leadership have emphasized that their bill sharply reduces the role of the federal government and delegates significant authority to states, school districts, and parents. Under current law, the Department of Education retains authority to make decisions about how NCLB is implemented by states. Kline’s bill would roll back the Department of Education’s role, and eliminate nearly 70 federal education programs, replacing that funding with block grant-like packages to be distributed locally. Kline’s bill also delegates accountability decisions — in other words, what the government does with test results — from the federal government to states and school districts.

For some of the GOP’s most conservative lawmakers, this package is still not good enough. That group has stalled Kline’s bill once before: In February, when the Student Success Act was initially on the House floor, conservatives revolted, forcing leadership to pull the bill when it became clear it didn’t have the votes. In March, Heritage Action, the advocacy wing of the conservative Heritage Foundation think tank, came out swinging against Kline’s bill once more, arguing that it doesn’t cede enough control to families and local authorities and that its spending cuts were insufficient.

Beyond his own party, Kline must deal with an equally vocal Democratic caucus, whose support — at least from some members — is necessary if he and GOP leaders hope to get a bill out of Congress. Democrats generally dislike the standardized testing-heavy approach of NCLB, its punitive sanctions for poor results, and how it tied teacher performance ratings to test results. While Kline’s bill allows states to largely craft their own approaches on accountability, it still maintains the frequency of testing under NCLB: that students in grades three through eight be tested in math and reading annually, and once in high school. That’s something both teachers’ unions and conservatives would like to see changed.

And then there’s the Senate. The upper chamber is considering its own NCLB rewrite bill known as the Every Child Achieves Act. The legislation is the product of a compromise between Republicans and Democrats on the Senate Health, Education, Labor and Pensions Committee, and it’s more bipartisan than Kline’s chiefly Republican-crafted bill.

There are a few key points of departure between the House bill and its Senate counterpart. For one, the Senate would require states to intervene and assist particularly low-performing schools. It’d also give states and districts the option to incorporate teacher-designed tests or projects, instead of standardized tests, in accountability systems.

An amendment introduced by Montana Democratic Sen. Jon Tester would replace the annual testing mandate, upheld in Kline’s bill, with so-called “grade span” testing, which is less frequent. Sen. Al Franken stated his intention on Tuesday to include the Student Non-Discrimination Act as an amendment on the Senate bill, which would codify anti-discrimination protections for LGBT students into law.

Whatever Congress agrees on is likely to have at least a few items that are true crowd-pleasers across the board. Both bills do away with some of NCLB’s least popular provisions — particularly those that emphasize the role of standardized testing. The mandate that schools must make “adequate yearly progress” in testing — or else face sanctions such as teacher firings or even school closing — should be a thing of the past. Both bills also eliminate the requirement that states assess teachers and school administrators largely through student testing as a condition for receiving federal education money.

Mary Cathryn Ricker, a vice president of the American Federation of Teachers, says her organization is heartened by the Senate’s stab at bipartisan reform, and said that chamber appeared serious about revamping NCLB “for the first time in a long time.” Ricker said that stands in sharp contrast to the House bill, which she said “would allow funding to be redirected from English language learners or low-income students, [which] defeats the original intent of ESEA.”

If both chambers pass their respective bills, NCLB reform will head to a conference committee, where legislators from both parties and chambers will hammer out details before sending a final product to President Obama.

Getting Obama’s signature could be a tough ask if the bills don’t change much: on Monday, the president applauded the bipartisan nature of the Senate’s bill, but expressed disappointment with both chambers’ bills, calling their accountability provisions insufficient. The White House says it wants legislation from Congress that specifically focuses on the lowest performing schools in each state, and requires states and school districts to have plans to improve them. That’s close to what the Senate bill currently has.

Still, the bipartisan nature of a conference bill means Obama will be under serious pressure to sign whatever Congress gives him — even if it’s closer to the vision of House conservatives. He hasn’t ruled out a veto, however.

Both chambers begin consideration of the bills this week. The House will vote on Kline’s bill, with some amendments, on Wednesday. The Senate, which began debate Tuesday, is likely to work on its bill for the next week, at least. Despite the mountain of potential obstacles, Kline is optimistic about the chances of reform.

“Every day we fail to replace No Child Left Behind is another day states are tied to a broken system and children remain trapped in failing schools,” Kline said in a statement. “I am pleased to see the process resume in the House so we can move one step closer to sending a commonsense bill to the president’s desk.”

Is our legislators learning? After 13 years, Congress takes stab at reforming No Child Left Behind