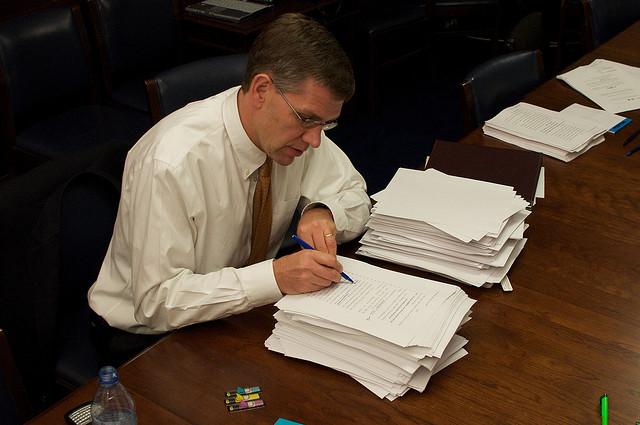 CC/Flickr/House GOP
Rep. Erik Paulsen doesn’t shy away from getting into the details of lawmaking.

It’s not that the Eden Prairie Republican doesn’t have them — for one thing, he’d like to see a fundamental rewrite of the entire tax code — but in a political environment where such sweeping legislation becomes immediately stuck in gridlock, Paulsen has chosen instead to focus on the tiny, the mundane, the overlooked detail.

Since arriving in Washington in 2009, Paulsen, a former Minnesota House Majority Leader and analyst for Target, has carved out a niche within the Republican caucus as a sharp, detail-oriented numbers guy with a knack for producing policy that homes in on specific issues in the tax code and health care.

Paulsen’s wonky approach centers around the idea that there is always something — a small fix to a larger problem — that reasonable people can agree to. In a highly partisan climate where big, comprehensive laws rarely get off the ground, it may be one of the few paths left for actually getting things done in Congress.

As a member of the House Ways and Means Committee — the panel charged with writing tax, health-care, and trade law — Paulsen regularly introduces bills that focus on tax policy or health care. In the first eight months of the 114th Congress, Paulsen introduced 16 bills. (Only Rep. Keith Ellison, with 20, is more prolific.) Eight of them focused on taxation, and four focused on health care. One bill, which proposes repealing the Affordable Care Act’s tax on medical devices, hits both areas.

Here is a sampling of some of the policy Paulsen has proposed this year:

The bills are emblematic of Paulsen’s legislative style: Instead of following the lead of some in the GOP caucus by proposing a repeal of the Affordable Care Act — a pointless exercise that’d eventually meet President Obama’s veto pen — Paulsen prefers to make small adjustments to the law that are more likely to receive bipartisan support. For example, his Family Healthcare Flexibility Act makes health savings accounts, favored by conservatives, slightly more advantageous in the healthcare ecosystem of Obamacare.

Paulsen hasn’t touched comprehensive immigration reform, a goal that many in Congress claim to want, but one that quickly stalls amid partisan rhetoric and electoral politics. Instead, he has targeted one issue, by introducing a bill that would give American-educated foreigners an easier path to securing long-term U.S. visas.

Why has Paulsen chosen to spend his career in Congress taking on very specific issues that most Americans might file under the category of boring, but important? One factor to consider is the makeup of Paulsen’s congressional district. The 3rd District covers Minneapolis’ western suburbs, which are home to some of the wealthiest ZIP codes in the state. Much of the state’s medical-device sector is based in the district, too.

The 3rd District is also somewhat moderate politically. Though it has sent a Republican to Congress for decades, the district voted for Barack Obama in 2008 and 2012, and the Cook Political Report — which rates the partisan preferences of congressional districts — says it leans only two points in the Republican direction. (Democratic Rep. Collin Peterson’s 7th District, by contrast, leans Republican by five points.)

Considering the 3rd District’s politics, wealth and industries, Paulsen’s approach makes sense. His office says the most common topic of concern that constituents bring up in phone calls is tax reform. Paulsen and his staff say that the majority of their ideas for legislation come from constituents, as well as other groups aware of his reputation in the House.

“When you carve out a niche, then different stakeholders start to come to you and say, hey, what do you think about this?” Paulsen says. He cites the bill to amend private foundation tax rules as an example, saying that foundations in his district and elsewhere came to him explaining their difficulties.

Another influence on Paulsen’s approach is simple: the political environment in which members of Congress operate. Ambitious, far-reaching legislation and reform packages were once common on Capitol Hill, but as the ranks of congressional moderates have hollowed, Congress has seemingly governed from crisis to crisis, passing short-term and stop-gap measures instead of long-term bills.

Like other members from both parties, Paulsen wants comprehensive tax reform legislation passed by both houses and signed by the president — something that hasn’t happened in 30 years, and isn’t likely to happen anytime soon. While Paulsen is publicly optimistic at the prospect, his legislative record shows a more pragmatic approach: Instead of taking on tax reform whole hog, he’s leading the charge to chip away at it with incremental, highly focused legislation.

“If I could wave my magic wand, we’d do comprehensive tax reform,” Paulsen says. But because it’s been “elusive,” he says, “by doing a lot of little things, we build more momentum so we can be more successful on bigger stuff.”

Like most bills, plenty of Paulsen’s haven’t gone anywhere, but he can point to a couple of successes. The Don’t Tax Our Public Safety Heroes Act, introduced earlier this year, made it through Congress and was signed by President Barack Obama. His medical-device tax repeal bill passed the House, and awaits a vote in the Senate. It has stalled before there, but Paulsen is optimistic it will get a yes vote — nearly every member of Minnesota’s House delegation voted for the bill, and Sens. Klobuchar and Franken support repealing the tax (Democrats have criticized Paulsen’s bill for lacking an offset to the lost revenue).

One last thing to consider is that the guy is just a wonk by nature. He doesn’t just care about the minutiae of tax policy, he likes it. Paulsen received a mathematics degree from St. Olaf College, and embraces the “math guy” identity, though he says his daughters make fun of him for it. He says his math background has “given me good analytical skills … not just number crunching, but looking at a problem and trying to solve it.” As a former member and majority leader of the Minnesota House of Representatives, he says he got the opportunity to hone those skills on policy.

It’s tempting to compare Paulsen to another, better-known congressional wonk: Rep. Paul Ryan. While both are lanky Midwesterners, the similarities do extend past the superficial. Ryan is the chair of the Ways and Means Committee upon which Paulsen sits, and both have made names for themselves as economic policymakers — though Ryan, who famously pushed broad budget overhauls, has arguably been more ambitious in scope. Both also got their starts in politics the same way, as congressional staffers: Paulsen worked for his 3rd District predecessor, Rep. Jim Ramstad, and Ryan for former Wisconsin Senator Bob Kasten.

The comparison to Ryan is one Paulsen welcomes. “In many respects, I like to think I’m cut from the same cloth as Ryan,” he says. “What I like about him is that he’s very forward thinking. He knows the chair does well when members of the committee shine.” The praise goes both ways: In a statement, Ryan said, “What I admire most about Erik is his laser-like focus on making good policy. He spends every day trying to help the people of Minnesota, and he’s one of the sharpest minds on our committee.”

One point of departure between the two, however, is that Ryan — who was Mitt Romney’s running mate in 2012 — can sometimes be a partisan lightning rod, while Paulsen has taken pains to avoid controversy. He says he talks with Democrats often, and says “relationships matter … in divided government, you’re never going to get your way 100 percent of the time.”

To that end, when he introduces a bill, Paulsen says he “shops them around … I talk to members and get to know them, and that has created opportunities to work with [Democrats].” Indeed, his office says that over 80 percent of the bills he has sponsored or co-sponsored have also been co-sponsored by Democrats. Paulsen acknowledges this is not a common approach in the GOP caucus. He says there are some members of his party who will wait to vote on a bill or an amendment to make sure that not many Democrats support it. “I don’t think that’s the right approach,” he says.

Paulsen’s efforts at maintaining a pragmatic and bipartisan image haven’t spared him from Democratic criticism, however. Earlier this year, the 3rd District DFL began taking aim at Paulsen, suggesting his “moderate independent” image is an act. In an online post, the DFL cited a list of his votes, such as one in favor of the “Tea Party” Republican budget, in painting a picture of him as a right-winger. The DFL also hammered his advocacy for the medical-device-tax repeal. Though every member of the Minnesota delegation backs the idea to some degree, Paulsen’s bill would not replace the Obamacare funding the tax provides, basically a prerequisite for Democratic support. He has said an offset is unnecessary.

Still, Paulsen is a team player and a good soldier for GOP leadership, and as the party’s center has moved to the right, some moderates and liberals will find plenty not to like in his voting record — for example, on the environment. Paulsen, like much of the Republican caucus, has voted to weaken environmental regulations, and has voted against initiatives to curb greenhouse gas emissions. He has a 17 percent rating from the League of Conservation Voters.

But the legislation he has personally introduced — look no further than to the bill to provide tax relief to the families of fallen or injured firefighters, for example — appeals to a healthy swath of the electorate.

For those issues that aren’t as straightforward, though, Paulsen and his staff acknowledge that messaging can be an uphill battle.

“There are small bills that the average person may never have heard of — kind of wonky, that get in the weeds,” he says of his record. In making his point, Paulsen recalled a coffee group he visited last week at a McDonald’s in his district. “I showed up and there were about 25 people there,” he said. “They were asking me — ‘how come Congress isn’t doing anything?’ I rattle through the little things, and they say, ‘how come we don’t hear about them?’ That can be a constant battle.”

The congressman acknowledges the 24-hour news cycle doesn’t exactly reward politicians like him, who may not grab headlines with big, bold ideas but prefer to quietly advance policy. But he says he doesn’t care. “I’ll continue to be a workhorse. I don’t need to be on cable TV, I just wanna get stuff done.”