In most U.S. states, a typical 16-year-old can drive a car, get married, hold a job and pay taxes on the income they earn from that job. Fifth District Rep. Keith Ellison believes there’s another thing 16-year-olds should be allowed to do: vote. 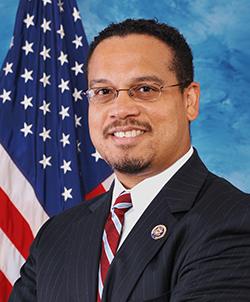 Last week, Ellison tweeted, “I think the voting age should be lowered to 16. What do you think?” It wasn’t the first time he had expressed his view about the voting age; he did so in 2012, also on Twitter.

It’s hardly common for federal-level officeholders to push for lowering the voting age; Ellison mentioned some state legislators who share his stance, but not any members of Congress. But supporting a policy like this is characteristic of the five-term congressman from Minneapolis, who is a vocal advocate for voting rights and has supported an array of policies aimed at expanding the franchise. In the past few months, Ellison has introduced a get-out-the-vote initiative, entitled Voters First, and he has also sponsored legislation that would establish same-day voter registration and ban voter ID laws nationwide.

Some say that lowering the voting age, like other turnout-boosting practices, will disproportionately benefit Democratic and progressive candidates at the ballot box. Eric Ostermeier, who studies politics at the University of Minnesota’s Humphrey School of Public Affairs, has researched these kinds of get-out-the-vote policies, and says the raw numbers back up the Democratic advantage.

Roughly eight to nine million people would be eligible to vote if the minimum age were lowered to 16. According to Ostermeier, Americans aged 18 to 24 disproportionately support and identify with Democrats over Republicans. Forty to 50 percent of this demographic identifies as Democratic, a third identifies as independent, and about 20 percent are Republican. If what Ellison is proposing becomes law, he says, “it would be a boon to Democrats.”

Ellison disagrees with that line of thinking, saying that young people are ideologically diverse and often support conservative viewpoints. He also brought up the practice of same-day voter registration, a “progressive” measure that Minnesota has had in place for decades. “They think it will help Democrats … well, in Minnesota, we’ve had Republican governors, independent governors, Republican governors,” Ellison says.

Regardless of whom it would help — if anyone — most observers believe a lowering of the voting age is unlikely to happen anytime soon. Doing so nationwide would require an amendment to the Constitution. That happened in 1971, when Congress ratified an amendment to lower the voting age to 18, largely in response to the influential student activist movement of the 1960s.

So far, states and local governments have tested the waters on younger voting ages to some degree. Nineteen states allow 17-year-olds who will be 18 by the date of a general election to vote in primary contests for federal or gubernatorial elections. In Minnesota, these 17-year-olds may caucus for presidential contests, but cannot participate in any others.

Some cities have extended full local voting rights to 16- and 17-year-olds. Takoma Park, a Maryland suburb of Washington, instituted voting for 16- and 17-year-olds in municipal elections in 2013. The new voters voted at twice the rate of people over the age of 18 — which seemingly runs counter to the idea that lowering the voting age wouldn’t make much of a dent in turnout.

Minnesota could independently lower the voting age in nonfederal races if voters approved an amendment to the state constitution. Ryan Furlong, spokesman for Secretary of State Steve Simon, says that the secretary “supports existing law that requires a U.S. citizen to be at least 18 years old on Election Day to vote, but [he] is always open to exploring ways we can increase civic engagement with young Minnesotans.”

Ellison did not mention any specific action he would take on the voting age, saying instead that it would require a “movement” on the part of teenagers.

“You create a constituency if you have the vote,” he said. “People are very concerned about women, black people, labor, business … but there’s no concern about the teenage vote. If they can vote, we have to be concerned.”

“Sixteen-year-old students need to raise their voices,” Ellison said. “A lot of people beyond [them] could benefit from their vote.”