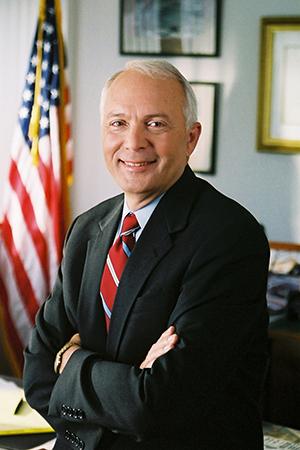 WASHINGTON — For the second time in three weeks, Congress has been shaken by unexpected political earthquakes: first, the resignation of House Speaker John Boehner, and second, today’s sudden announcement that his heir-apparent, Majority Leader Kevin McCarthy, would withdraw his candidacy for the speakership.

When McCarthy announced his decision during a closed-door meeting to elect the GOP speaker nominee on Thursday afternoon, members were visibly shocked and shaken. The party faces a full-fledged leadership crisis, and it is now digging deep for a solution.

One name thrown out as a potential answer to the Republicans’ problems: Second District Rep. John Kline.

In the hours after McCarthy’s decision, members of Congress, the media and political observers threw out an array of potential replacement candidates for McCarthy as the House’s next speaker. But over the course of the afternoon, an unusual idea gained traction: electing a member who has already announced his or her retirement to serve as an interim, or “caretaker” speaker to hold the role until the end of 2016.

Only a handful of GOP representatives are retiring, and Kline is perhaps the most powerful and well-liked among them. In a brief statement, a Kline spokesperson did not dismiss the possibility, saying only: “Congressman Kline is confident House Republicans will select someone who can do what’s best for our country and this institution.”

The spokesman also confirmed that Kline has been approached by other members of Congress about running for speaker. He did not say whether Kline was considering the proposal.

For disgruntled members of a fractured, historically rebellious House Republican conference, the idea of an old hand like Kline, now unburdened by electoral considerations, getting the House in order is no doubt an appealing one. According to BuzzFeed News, top House Republicans have broadly endorsed the idea of a “caretaker speaker.”

The argument goes like this: Get someone like Kline — experienced, well-liked — to pick up the gavel while the House GOP sorts out a way forward. That would allow Boehner to depart at the end of October as planned, while a speaker slated to leave at the end of 2016 would have a free hand to guide must-pass legislation — like transportation funding and raising the debt ceiling — through the chamber.

The full slate of leadership elections could occur as late as the end of next year. For now, Boehner has postponed leadership elections indefinitely — meaning his expectation to retire at the end of October could be dashed. Wisconsin Rep. Paul Ryan is considered the most desirable candidate for speaker by many in the caucus, but he has repeatedly declined to run. McCarthy said that Ryan would make a “fantastic speaker,” and Boehner reportedly called Ryan several times to urge him to run.

Few other names have been floated as viable candidates for full-time speaker. McCarthy’s potential opponents — primarily Reps. Jason Chaffetz and Rep. Daniel Webster — are seen as perhaps too conservative to win over enough of the House GOP. Kline is seen as the kind of member who could potentially secure 218 votes, the threshold needed to win a speakership election.

If Ryan is the only Republican who could plausibly win over the establishment and conservative wings of the House GOP, his failure to enter the race could prompt more members to endorse the idea of a caretaker speaker.

It’s important to note that even Capitol Hill veterans were shocked by the news, and the situation is very much in flux.

How in flux? Mitt Romney is being floated as speaker candidate. The position, after all, does not technically need to be held by a sitting member of Congress.

Could a John Kline ‘caretaker’ speakership be the solution to House Republicans’ leadership dilemma?