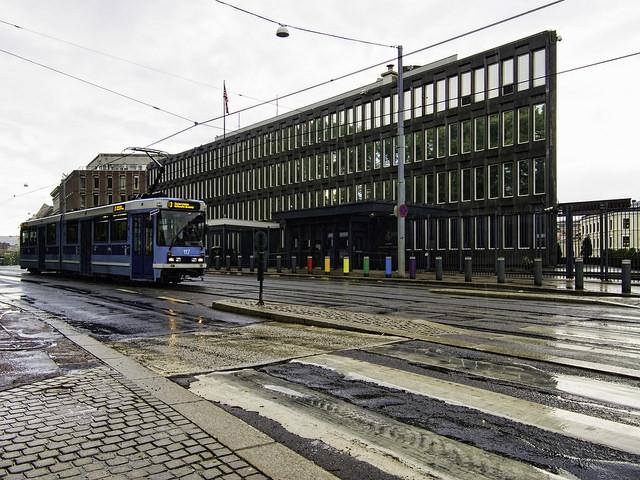 CC/Flickr/Dan Lundberg
The U.S. Embassy in Oslo has been without an official ambassador since September, 2013. Robert Bradtke is the American currently in charge in Oslo as de facto ambassador.

WASHINGTON — In the ongoing political war between the White House and some Senate Republicans, Minnesotan Samuel Heins is caught in the crossfire.

Heins, a Minneapolis lawyer and Barack Obama supporter, was nominated by the president in May to serve as U.S. ambassador to Norway — a post that has sat vacant for two years. But a handful of Senate Republicans are vowing to block executive appointments in many departments, including several ambassadorships like Norway.

Earlier this year, Heins appeared to have an easy path to confirmation. He was a welcome choice after Obama’s initial nominee, New York Democratic megadonor George Tsunis, withdrew his bid in December 2014. Earlier that year, Tsunis’ candidacy was tarnished by a painful committee hearing in which he made several misstatements about the country and its politics.

There were no doubts as to Heins’ qualifications: he built a distinguished career as a lawyer in Minneapolis, and serves on the boards of several area nonprofits, including the Center for Victims of Torture. He was also a top donor and bundler for Obama campaign contributions, gathering at least $1 million in campaign cash in 2012. (Heins served on MinnPost’s board from 2009 to 2011.)

In his testimony before the Senate Foreign Relations Committee, Heins touted his Minnesota background, and said residents think of themselves as “honorary Norwegians.” Minnesota is home to the country’s largest population of Norwegian-Americans — fitting, then, that he be appointed to the post.

Unfortunately, Heins is at the mercy of two institutions that don’t much like each other these days: the Republican-controlled Senate and the White House. In the Senate, even one member — especially a member of the majority — can have an outsize effect on the confirmation process. Majority Leader Mitch McConnell has so far only leveraged his power to overrule the objections of members of his party in order to advance one appointment: that of Attorney General Loretta Lynch, whose confirmation was delayed by some Republicans earlier in the year.

Other appointments, though — including ambassadorships — appear to be fair game for Republicans who have a score to settle with President Obama. Freshman Sen. Tom Cotton, R-Arkansas, says he will block Heins’ confirmation, as well as those of two other ambassador nominees, until the White House investigates an incident in which the Secret Service leaked embarrassing information about Congress’ top presidential watchdog, Republican Rep. Jason Chaffetz of Utah. Meanwhile, Texas Republican and presidential candidate Ted Cruz has said he will block any State Department-related appointments because of his dissatisfaction over the Iran nuclear deal.

Senators Al Franken and Amy Klobuchar have vowed to move Heins’ appointment in the face of GOP opposition. In a statement, Franken touted the shared political, economic, security, and cultural ties between the U.S. and Norway, and said Minnesota is emblematic of their bond. “Sam Heins is an excellent choice for the job of Ambassador to Norway,” he said, “and I’m disappointed that his nomination is being unreasonably held up in the Senate.”

Klobuchar has been one of the most vocal backers of Heins. “I have no doubt Sam Heins would be a great fit for this position and would help sustain and strengthen the bonds between the United States and Norway,” Klobuchar said in a statement. “I have been calling on my colleagues to bring his nomination up for a vote and I will continue working until we fill this important post.”

While Senate Republicans appear content to play a longer game, the administration is running out of time. Heins and other appointees would only have over a year to serve even if they were confirmed tomorrow: ambassadors appointed for political reasons — as opposed to career diplomats — typically step down when the president they backed leaves office.

Meanwhile, others worry about the effect an extended vacancy in the ambassador’s chair might have on the U.S. relationship with Norway. The countries are historically strong allies, but the Tsunis debacle angered some Norwegians. Two career foreign service officers have served as de facto ambassadors to Norway since September 2013, when the last official ambassador stepped down. Robert Bradtke is the American currently in charge in Oslo.

To Roger Moe, the former gubernatorial candidate and DFL Senate majority leader, the situation is harming U.S.–Norway ties. “I think Norway perceives it as a slight,” said Moe, who is of Norwegian descent and is active in the Norwegian-American community. “They don’t say it or are very diplomatic about saying it, but I think they feel they’ve been a strong partner with the U.S., and here’s a situation where there is no reason they shouldn’t have an ambassador in place, and it hasn’t happened.”

Heins is more than qualified, Moe said, and his appointment shouldn’t be injected with partisan politics. “Here you have someone who has been through the process, approved by committee, the whole works, and is being held up for reasons that aren’t related to Norway!”

Heins did not comment, citing the ongoing confirmation process.