WASHINGTON — Minnesota’s favorite elder statesman, Walter Mondale, was the man of the hour in the nation’s capital on Tuesday, when many bold-faced names from the worlds of Minnesota and Washington politics converged to pay tribute to the former vice president’s career and legacy.

A day filled with praise, from a panel at the George Washington University to an evening banquet at the Four Seasons, seemed to confirm what many Minnesotans already believe: The man they affectionately call “Fritz” isn’t just a state treasure — he’s a national one.

The day — the culmination of a yearlong University of Minnesota initiative honoring the 87-year-old Mondale — began with a lively, wide-ranging conversation between Mondale and Biden. The two men primarily reflected on how immensely the vice presidency has changed in the last few decades.

For most of American history, of course, the vice presidency was a punchline — constitutionally ill-defined, it was at best a presidential warm-up act; at worst, as onetime veep John Nance Garner famously put it, it was no better than “a warm bucket of spit.” To many historians — not to mention many of those present in the audience — Mondale was the first truly consequential vice president, and redefined the office for the modern era.

Mondale was the first vice president to enjoy virtually unlimited access to the president, play a major role in shaping domestic and foreign policy — even the first to have an office in the West Wing. President Jimmy Carter, a D.C. outsider, relied on the three-term Minnesota senator’s knowledge of the workings of the Capitol.

Biden, who credited Mondale for laying the groundwork for future vice presidents, was an appropriate foil at the talk: Biden, like Mondale, was a creature of the Senate, and rose to chair the Foreign Relations Committee, also like Mondale. Obama’s veep calculus mirrored Carter’s, too — to add some congressional and foreign policy gravitas to his candidacy.

After the Biden-Mondale panel — the first of the day — much of the Biden-hounding press corps departed and guests settled in for a day of exploration of various parts of Mondale’s legacy, from foreign policy to civil rights to national security. Through each talk ran a common thread: Mondale’s foresight as a thinker, skill as a statesman, and generosity as a mentor and friend.

The panelists were a combination of professors, advocacy leaders, lawmakers, and old Mondale allies. U.S. Sens. Patrick Leahy and Dianne Feinstein praised Mondale’s commitment to transparency in the U.S. intelligence apparatus; civil rights leaders Andrew Young and Josie Johnson touted Mondale’s advocacy of the Fair Housing Act, among other things; a quartet of former Carter administration officials commented, naturally, on what they saw as the criminally underrated foreign policy achievements of Carter and Mondale.

There were good nuggets of political lore, too: The audience roared at the tale of Mondale, visiting the British prime minister shortly after the election, breaking out into the song of the ruling Labour Party, prompting hours of singing and the imbibing of a bottle of Winston Churchill’s port wine.

The praise for the Carter-Mondale White House was effusive at a banquet Tuesday night in Washington, where the 39th president sat for a moderated discussion with Mondale. The 91-year-old Carter, who was diagnosed with brain cancer in August, was cracking jokes and animatedly recalling his and Mondale’s time in the White House. 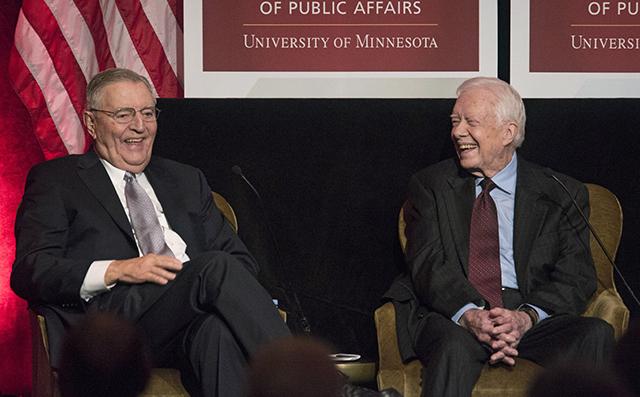 REUTERS/Joshua Roberts
Carter: “Fritz was an expert on what was going on in Washington … as far as I know, he was almost like another president.”

Carter detailed how he sought to elevate the office of the vice president, and how Mondale was the ideal person for the job. “As a Georgia peanut farmer, I needed a lot of help, and I thought the vice president would be best to give me the help I need,” Carter said. “Fritz was an expert on what was going on in Washington … as far as I know, he was almost like another president.”

“What Fritz and I did together was historic,” Carter added. “It changed the basic structure of the executive branch of government to bring the vice president in as a full partner.” Biden, speaking again at the banquet, would repeatedly praise the Carter-Mondale administration’s thoughtful philosophy of government, and credited them for the close relationship he enjoys with Obama.

Klobuchar, whose first D.C. job was an internship for Mondale, told a favorite story of how the vice president made her inventory every piece of furniture in the office. Despite that old-school lesson in hard work and paying your dues, Klobuchar said that Mondale was remarkably forward-thinking.

“He was always ahead of his time,” Klobuchar said. The most important thing he ever did, she said, was he “stood up in Minnesota and said his presidential running mate was Geraldine Ferraro.”

In short supply, naturally, was mention of Mondale’s electoral shortcomings: his and Carter’s failure to win re-election in 1980, and his landslide defeat to Ronald Reagan in the 1984 election. (Mondale would only carry Minnesota and D.C. in that lopsided contest.) And in many parts of the country, the Carter-Mondale years aren’t remembered as a pinnacle of American leadership, but a nadir.

Klobuchar would still credit Mondale, saying it wasn’t easy for him to run against Reagan in 1984 knowing most people were predicting Reagan would win. In 2002, when Mondale came out of retirement to replace Paul Wellstone on the DFL ticket after Wellstone died shortly before election day, she said he ran “with grace, and good purpose, and for the right reasons.”

The grace of Mondale in the face of electoral defeat was an interesting backdrop for two lengthy appearances from Biden during the events. The vice president, of course, has been publicly mulling a presidential run for months now, and is reportedly near a decision. The situation was barely mentioned, but it was hard to miss several instances in which Biden seemed to refute Hillary Clinton — for example, his repeated declarations that “Republicans aren’t the enemy” versus Clinton’s debate-night comment that she’d made an enemy out of the GOP.

Biden speculation aside, the day was undoubtedly about Mondale, and along with the wine and steak, there was a heaping serving of nostalgia for a time when progressives stood on principle and told the truth, political consequences be damned.

Mondale, who reportedly was not terribly enthusiastic at first about the idea of a day in D.C. to honor him, seemed at times taken aback by the outpouring of affection for him. At the dinner — where the diners were not only Minnesotans — Franken declared: “In Minnesota, we don’t like Walter Mondale. We love Walter Mondale.”

The room roared its approval.

In Washington, a day to honor Walter Mondale’s legacy