Bob Helland lives in St. Paul, works in Minnetonka, and thinks the two-party system is broken and corrupt.

He might not exactly fit the mold for a DFL candidate in the Sixth Congressional District, but as of now, he’s the only one officially challenging incumbent Rep. Tom Emmer. And the 30-year-old is aiming to unseat the freshman Republican in Minnesota’s most conservative district with a mix of frank rhetoric and a willingness to court voters outside of the DFL’s traditional constituencies.

Helland didn’t come from out of nowhere. Last year, he ran for secretary of state under the Independence Party banner, on a platform of refocusing the office on its business services responsibilities rather than its voting ones, and maintaining the office’s nonpartisanship.

Though Helland failed to gain much traction in the election — he captured just under 5 percent of the vote, far behind eventual DFL victor Steve Simon and Republican Dan Severson — his candidacy did not go entirely unnoticed. While the editorial boards of the Star Tribune and Pioneer Press gave Helland either passing or no mention, the Rochester Post-Bulletin framed it as a three-way race, and praised the young candidate.

Though it endorsed Simon, the Post-Bulletin wrote, “We liked what we saw in Helland. Often dismissed as a third-party candidate, the 29-year-old showed us a level of understanding that makes him a contender in the race. He’s not reaching for the obvious political vote.”

In a conversation with MinnPost, that much was clear: Though he is running for the DFL endorsement, Helland said a few things that aren’t likely to endear him to the party activists who populate the nominating convention, even if they may like his policies.

Helland says he wants to broaden the DFL tent, and claimed he’d court constituencies that past DFL candidates have ignored. “By definition of state law, count me as a DFL member. … I want to compete because I’m a progressive independent,” he says. “I want to put myself in the best position possible, getting as many endorsements and support from other parties, and get nonpartisans out there who feel there’s a distortion of the political system caused by the two-party system.”

Specifically, Helland said he’d court the backing of his former Independence Party — which lost major-party status in Minnesota after 2014 — as well as the Libertarian, Green, and the Grassroots-Legalize Cannabis parties.

Helland added that an endorsement from a major party confers upon a candidate “huge privilege” and millions of dollars. “Corruption is a word I’m not afraid to throw around in the 21st century,” he said. “Does it compromise me that I may use these favors to win? No,” he said, adding he’d criticize the DFL where others might not.

When asked whether his suggestion that the two-party process — and, by extension, the DFL — is corrupt harms his chances with party activists, Helland said he’s just being straightforward. “It’s apparent to everyone I talk to that I’m not a true DFLer,” he explained. “I’m a progressive independent, and I’m going to challenge what the DFL is in the state.”

Helland said that he’s been received favorably at DFL events in the district and at the Wellstone Dinner he spoke at this fall. He added that he’s had candid conversations with DFL Chair Ken Martin and DNC vice chair and former Minneapolis mayor R.T. Rybak about his candidacy. “People want change and they want something different,” Helland said. “Not what the DFL has seen in CD6 over the past election.”

Helland clearly projects an independent spirit: While some of his policy positions will be popular in the progressive base of the DFL, others are a bit unorthodox. On the appealing-to-the-DFL side of the ledger, he’s strongly supportive of government oversight of the financial sector. Using language from the Elizabeth Warren playbook, he hammered a bill Emmer introduced this year that would reform the Financial Stability Oversight Council, an independent board established in 2010 to guard against certain banking strategies believed to have hastened the financial crisis in 2008.

Helland claimed Emmer was directed by special interests to push a bill he, and the White House, believe would gut oversight of Wall Street.

Helland also takes a liberal approach to foreign policy, and refuted Emmer’s call to declare war on ISIS by arguing the U.S. does not need another open-ended Middle East conflict.

Beyond that, though, Helland’s platform is a bit more eccentric. On his website, he says his primary campaign issue is “representative government in accordance with the Constitution of the United States.” For him, acting on that issue appears to mean passing two new constitutional amendments, one to greatly expand the size of Congress and one to reduce lawmakers’ salaries.

Helland told MinnPost that his top three issues on the campaign trail would be human trafficking and labor exploitation, tax reform, and national security. It’s hardly the meat-and-potatoes stuff, like good jobs and health care and schools, that makes up your average congressional campaign platform.

It’ll be an uphill climb

Virtually no one, Helland and DFL officials included, believes the 30-year-old’s path will be easy, or even viable. The prognosis for any DFLer — much less a “progressive independent” like Helland — is grim in Minnesota’s most conservative district. Emmer won last year’s open seat contest by 18 points, and will enjoy a greater advantage next year as an incumbent.

With two high-profile contests in the 2nd and 8th Congressional Districts, the DFL will have its hands full. With finite resources, it is unlikely to divert them to the 6th District.

Ken Martin confirmed to MinnPost that he and Helland — whom he calls an “energetic guy with passion”— have spoken, but emphasized the party and the candidate are still “feeling each other out.” “I haven’t had a chance to talk with Bob at length about his campaign and what he wants to focus on,” Martin said. “I’m glad he’s in the race, I welcome him to the race, and if he’s the DFL-endorsed candidate, we’ll work hard for him.” In an email, Rybak said he and Helland had exchanged tweets, but nothing more. 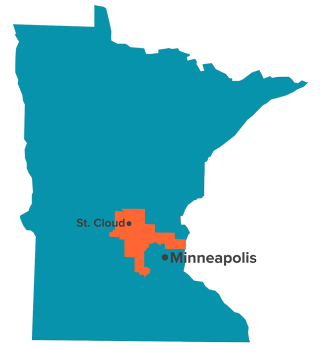 Beyond that steep disadvantage, Helland faces another hurdle: He doesn’t live in the district. He lives in St. Paul, where he worked for years as a tax analyst with the Department of Revenue. Currently, he is working as a contractor in business analysis for Cogentix Medical, a medical device company in Minnetonka. However, Helland certainly has roots in the district: He grew up in Sauk Rapids, just north of St. Cloud, and graduated from St. Cloud State.

One might think being 80 miles down I-94 from CD6’s largest city could be problematic for a congressional bid. Helland said he has no definite plans to relocate, though he didn’t rule it out. He insists he can get the job done anyway: “I graduated from their schools, I worked for companies in central Minnesota — it’s not an argument that’s going to undercut my qualifications as a candidate,” he said. “If anything, people in the district will value someone who’s worked in very different and complex systems within government.”

As the election year gears up, Helland figures to be a bigger presence on the trail in CD6. Though he filed his election papers months ago, his campaign apparatus is slowly getting off the ground. He says he has one person who is serving as both campaign manager and field director, and a few informal volunteers.

Helland has not yet filed a full quarterly report with the Federal Election Commission, but he admitted that fundraising has been a challenge. Donations to the campaign are listed on Helland’s website; only four people have donated to the campaign in the past two months. “We will need to reconsider where we're at with that,” he said.

Despite the obstacles, and his promise to antagonize the DFL if needed, Helland says he’s confident he can beat Emmer, precisely because of his unusual profile. “The DFL focused on DFL voters last year — that’s a failing strategy in CD6,” he said. “I’m going to be going to different groups of people, I might contact Republican Senate districts and say, 'Hi, I want voters to know I’m also in the race.' "

“The strategy is not what polls show, or what’s coming out now, but voters who haven’t voted in past elections, who weren’t turning out … I’m confident we’ll get a majority of people, if it’s a race between Rep. Emmer and I, that it’s Bob Helland they’ll want in office.”