WASHINGTON — One of Washington’s favorite cans to kick down the road has finally found an off-ramp: after passing 36 short-term extensions, Congress passed a five-year plan to fund the nation’s highways and infrastructure. The last time it funded them for longer than two years? 2005.

Last week, President Obama signed the compromise bill, the so-called FAST Act, that provides $305 billion in federal money over the next five years for transportation projects. It had been negotiated for months, but passed overwhelmingly out of Congress last week as officials sought to put a law in place before highway funding ran out.

The bill won’t resolve all the questions surrounding transportation policy — for example, it does not raise the federal gas tax, which has been the same since 1993, even though there are Democrats and Republicans who want to raise it. Still, the law provides much-needed certainty to federal, state, and local transportation agencies, as well as businesses, in planning and executing projects in the long term.

How much does Minnesota get?

For Minnesota, there’s certainly enough to like here. For one, the state’s getting more cash:  through fiscal year 2020, Minnesota is slated to receive just over $4 billion total from Uncle Sam for transportation, $3.4 billion in highway funding and $550 million in transit funding.

In millions of dollars

State lawmakers still need to figure out a transportation funding plan, but with the numbers from the federal government set, at least one piece of the puzzle is in place.

So, where will all that fresh cash go? Most will go into the hands of MnDOT, the Met Council, and other transportation authorities around the state.

For highway spending, which is primarily the purview of MnDOT, that money will be funneled toward various programs: $895 million, for example, into block grants that authorities can use for highways, roads and bridges; or $167 million for a federal program designed to encourage states to ease traffic congestion and improve air quality.

While exact funding plans are not yet set in stone — and won’t be until Congress passes a bill to fund the government — this transportation bill will lead to simple, tangible improvements along with longer-term projects, says Serge Phillips, federal relations manager for MnDOT. The bill will finance a broad array of things, from basic highway maintenance and repair to more specific items like widening roadways to reduce traffic congestion, collecting better safety data on freight trucks, or simply buying more buses in Minnesota cities.

Federal money is also crucial for big-ticket highway projects, says Phillips. “Federal funding accounts for about 60 percent of our capital highway construction funding — that is for infrastructure, roads and bridges,” he explains. For MnDOT, $477 million of its $795 million total highway construction budget came from the federal government in 2014.

For transit projects, the $550 million sum through 2020 will get funneled into a variety of funds, such as one for bus improvements ($26 million over five years), transit resources on Indian reservations (over $11 million), and rural transportation (about $1.5 million).

If you’re a public transit user in the Twin Cities, you might be wondering what this big bill does for long-awaited projects like the Southwest LRT. The short answer: it’s no silver bullet, but it’s a big help. For major projects, the five-year funding bill provides a rare commodity: stability from Washington. That will help projects like the Southwest LRT along, according to Adam Duininck, chair of the Met Council.

“If there are question marks about different pieces of Southwest coming together over the next year or so, knowing that the federal funding commitment is there in a long-term way helps build momentum toward Southwest and other projects,” Duininck says.

The federal government is a big part of light rail projects, Duininck explains, and could fund up to half of projects like the Southwest LRT or the proposed Bottineau Blue Line extension. Shoring up D.C. numbers, he says, will put much-needed pressure on legislators in St. Paul. 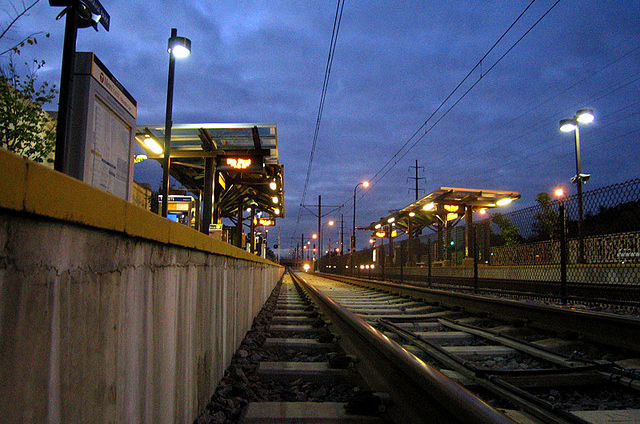 CC/Flickr/Drew Geraets
Met Council Chair Adam Duininck: “If there are question marks about different pieces of Southwest coming together over the next year or so, knowing that the federal funding commitment is there in a long-term way helps build momentum toward Southwest and other projects.”

“It was not that long ago that people looked at D.C. and said, no way they can get transportation, and then the workings of the bill came together,” Duininck says. “That’s a bipartisan bill, and here we’re working through the same dynamics, different parties in the legislature and a DFL governor. Is there a way for us to put together a package — something we can do that can make everyone happy, hopefully?”

MnDOT’s Phillips agrees that the stability offered by the bill is as precious a commodity as its money. Knowing what funding levels will look like for the next five years, at least on the federal side, gives state officials substantial room for long-term planning.

In pushing for a transportation plan over the last decade, lawmakers claimed that stop-gap transportation funding bills — which ranged from a few days to a year in length — rendered transportation authorities totally unable to develop plans for multi-year projects.

“I know this sounds bureaucrat-y, but the stability is really important,” explains John Schadl, a communications officer at the Met Council. “We have to negotiate complex financial deals with many different partners. If you can show partners you have a stable federal funding source, they won’t only continue with projects like Southwest but have more momentum going into other projects. That’s really not a small thing.”

Beyond funding levels, the long, wide-ranging bill contains plenty of other provisions that will affect transportation and the economy in Minnesota.

For example, the bill requires government buses and rail cars to be made from 70 percent domestic material, up from 60 — which could give a boost to the Minnesota steel industry. It also sets aside $6.3 billion over five years for freight rail in all 50 states, with a requirement that 25 percent of the funds go to projects in rural areas, which advocates see as a plus for Minnesota.

Beyond that, Eighth District Rep. Rick Nolan, the only Minnesotan currently on the House Transportation and Infrastructure Committee, included an amendment on the bill to allow logging trucks to use a 24-mile stretch of I-35 south of Duluth during wintertime, as opposed to Superior Street, which had been considered dangerous for the large trucks.

Nolan told MinnPost he “couldn’t be happier” about the final product his committee helped to produce. “I think it is an important and dramatic improvement in the U.S. transportation plan, in that it gives counties and states the long-term protection in what kind of money is available so they can do rational, intelligent planning,” he said. “It’s impossible to do your planning when you’re working with two-month and six-month extensions.”

In a press release, Sen. Amy Klobuchar took credit for several provisions in the bill aimed at helping Minnesota infrastructure, including one to improve safety at railroad crossings, one that expanded a grant program to combat distracted driving, and one that changed a grant program for teen driver safety.

“In Minnesota, we know all too well the importance of investing in our roads, bridges, and transportation systems,” said Klobuchar, referencing the I-35W bridge collapse in 2007. “This bipartisan, long-term bill will increase funding for Minnesota and give states and local officials the certainty they need to plan ahead for critical transportation projects.”

Transit officials and D.C. politicians weren’t the only ones pleased. Business leaders see the long-term transportation bill as an achievement that shores up some long-term stability for them, too.

“This is a big step for Congress,” says Bentley Graves, director of health care and transportation policy at the Minnesota Chamber of Commerce. “It fills in a number of blanks in a concrete way for us… These are real dollars that go into real projects around the state, and this will help us move along.”

Congress passed a long-term transportation bill for the first time in a decade — what’s in it for Minnesota?