Rep. Keith Ellison is not happy. In fact, he’s “incensed.”

The source of the Minneapolis Democrat’s pique? A new political attack ad has cropped up on D.C. airwaves in recent months, and it uses a quote from Ellison to attack an institution the congressman actually supports: The Consumer Financial Protection Bureau (CFPB).

The CFPB was established in 2011 as part of the Dodd-Frank Wall Street reform package and is intended to inform and warn consumers about various financial products, and to write and enforce rules in the consumer finance sector.

The agency is much loved by progressives like Ellison, while conservatives generally loathe it. The ad makes the case, though, that both Democrats and Republicans think it is broken and in need of serious reform.

The ad quotes Ellison as saying, “The CFPB does need to clean up its act …” That quote comes from a 2014 House Financial Services Committee hearing on alleged discrimination at the agency, which is a main focus of the attack ad.

After that ellipsis, though, Ellison would add an important qualification: “It so happens that the CFPB does need to clean up its act,” he says, “as every other federal agency does, proving that even a stopped clock can be right twice a day.”

Ellison thinks the ads are bogus — especially for the implication that he has some major problem with the bureau — and he’d like to let the people behind the ads know as much. There’s just one problem: Nobody knows who’s paying for them.

Thanks to campaign finance law, it’s hard to know who’s backing the ads

At the end of the ad, the narrator states “We are ‘Protect America’s Consumers’ ” — the only hint as to who might be behind the ad. 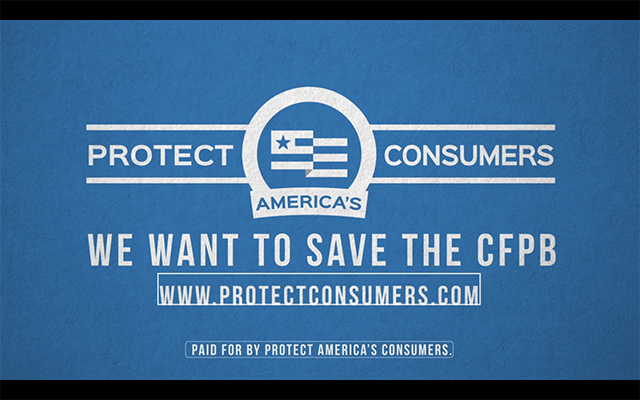 But who exactly is “Protect America’s Consumers?”

It’s difficult to say. The group is registered as a 501(c)4 nonprofit organization. That means it’s supposed to be a “social welfare” organization. Campaign finance law has been interpreted in a way that ensures these kinds of groups can participate in politics so long as they aren’t primarily political in purpose — i.e., that they don’t spend over half of their money on political activity.

But the big advantage to being a 501(c)4 is that a group doesn’t have to disclose the details of who gives it money. The only requirement the group has is to report how much it receives and spends annually.

Since the Citizens United Supreme Court decision, 501(c)4 groups like Karl Rove’s Crossroads GPS have become some of the country’s biggest political spenders, while the public remains mostly in the dark as to who is influencing them, and by how much.

There is no way of knowing, then, who is funding Protect America’s Consumers, and because it just filed for incorporation — Virginia state records show the date was November 18, 2015 — reports detailing how much the group spent and raised money will not be available until next year.

The records show that Protect America’s Consumers has as its “registered agent” an LLC called North Rock Reports, based in Warrenton, Virginia, a far-flung D.C. exurb. That LLC shares an address with a law firm, Holtzman Vogel Josefiak Torchinsky, whose website says it specializes in “counseling and compliance services to individuals, corporations, non-profit organizations, trade associations, PACs, Super PACs, and candidates who are engaged in influencing the public policy arena in Washington and across the nation.”

The firm’s partners all have some connection to Republican politics, and it has handled the business of several conservative outside money groups, according to Robert Maguire of the Center for Responsive Politics, a transparency watchdog that runs the website OpenSecrets. He says the firm is linked to the Koch brothers-backed American Future Fund, Rove’s Crossroads GPS, and former Minnesota Sen. Norm Coleman’s American Action Network.

Representatives at Holtzman Vogel Josefiak Torchinsky did not respond to requests for comment. Attempts to contact officials at Protect America’s Consumers were unsuccessful, but Steve Gates, who is described as a spokesman for the group in a Politico article, said that the group has no links to the Koch network or the GOP establishment.

According to Ed Mierzwinski at the U.S. Public Interest Research Group, a liberal advocacy group, Protect America’s Consumers has all the signs of a classic “astroturf” group. As opposed to a grassroots group, an astroturf group is “artificial … a campaign run usually by a political operative for some opposition organization that doesn’t want to come out in the open, because its money is tainted in some way.”

Other things help to shed light on the group’s potential political leanings: For one, the fixes that Protect America’s Consumers advances in its ad campaign would effectively render the bureau useless, according to Tom Feltner, who works on financial services issues at the Consumer Federation of America, a D.C.-based consumer advocacy group.

The group proposes, for example, that the CFPB be led not by one director but by a five-person board of commissioners. “That’s a recipe for gridlock,” Feltner says. “Over the last five years, we’ve seen a gradual shift in messaging from opponents of the CFPB, from direct attacks to the existence of the CFPB to covert attacks that would weaken the bureau and its ability to protect consumers,” he says.

Beyond that, it appears the group’s advertising has been targeted to put pressure on vulnerable Democratic lawmakers. Per press releases from the group, its ads have run in media markets in North Dakota, Montana, Indiana, West Virginia and the District of Columbia. It has also done direct mail advertising in Missouri.

In those five predominantly red states, the viewer is urged to contact their one Democratic U.S. senator. In each of these states, the Democratic senator is up for re-election in 2018.

With current campaign finance law shielding the donors who are paying for these ads, we may never know exactly who is behind them. But there are plenty of groups that have issues with the bureau, and would like to get it out of the way.

From the beginning, the bureau has been under siege from some people, mostly the conservative and libertarian-minded, as well as industries that would be likely targets, such as the payday lending, car loan and student loan sectors.

Payday lending, a $46 billion sector in the U.S., is a good example of the type of work the CFPB’s architects had in mind for the bureau. They argue that payday loans, sometimes called cash advances since they are linked to regular employment, disproportionately burden low-income people who may not be fully aware of the consequences of taking out very high-interest loans with difficult repayment plans.

The CFPB is soon set to release stiff new rules regulating the sector; for example, it is weighing a proposal that would give borrowers more flexibility in paying back types of payday loans that require full repayment in a short time.

The bureau’s adversaries interpret the payday lending focus of the CFPB as reflective of its bureaucratic overreach, and broadly argue that individuals should have the ability to use various financial products if they choose.

And that kind of regulatory activity, to them, confirms their fears that the CFPB was an attempt by progressives to permanently empower an anti-business, pro-regulation philosophy touted by liberals like Massachusetts Sen. Elizabeth Warren, who is deeply connected to the bureau and developed the idea while a professor at Harvard.

The Senate GOP attempted to nip the bureau in the bud early by blocking the confirmation of its first director — but Obama successfully appointed Richard Cordray in 2012 as a recess appointment, further angering the bureau’s opponents.

The CFPB has since settled into doing its work, but the attacks have continued: Last year, Coleman’s American Action Network ran ads that used communist-style imagery to underscore issues with the CFPB.

In the conservative Washington Times paper, Rep. John Ratcliffe, a Texas Republican and the House sponsor of Cruz’s bill, outlined the heart of their case. The bureau, he writes, “has applied a Washington-knows-best, one-size-fits all approach to regulating financial institutions across the country. These burdensome regulations are bad enough for big banks in Manhattan, but absolutely crippling for small community banks and credit unions across America.”

Indeed, some representatives from small banks claim that the CFPB is hurting them, and that Dodd-Frank would have been an acceptable law if it had not provided for the bureau’s creation.

What about the alleged misconduct?

While CFPB opponents like Cruz have sought to abolish the bureau, Protect America’s Consumers is now trying a different line of attack  — instead of arguing that the CFPB shouldn’t exist, the idea is that it needs to be saved in the face of glaring misconduct. 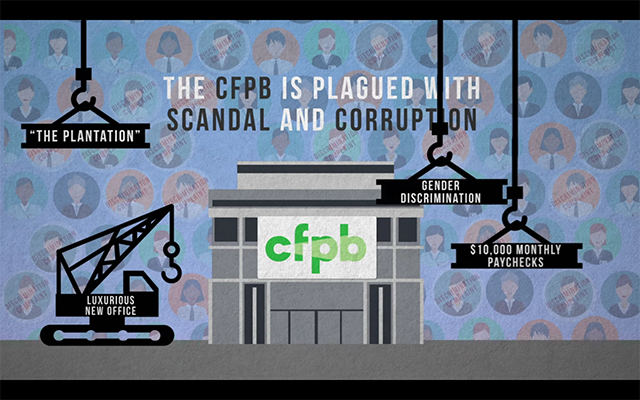 The ad alleges a culture of corruption and discrimination at CFPB.

There’s something to this. At a June 2015 congressional hearing, an equal employment official at the bureau testified that “never until my employment at the CFPB have I witnessed such blatant and willful disregard for the law, merit system principles, and the well-being of its employees.”

A 2014 internal report outlined an environment of “exclusion, retaliation, discrimination, nepotism, demoralization, devaluation, and other offensive working conditions” at one of the bureau’s divisions. It sparked GOP lawmakers to hold hearings, and Democrats and CFPB officials to cry foul, mainly over the report’s use of anonymous sources.

Supporters of the CFPB say that while the agency isn’t perfect, it is hardly the cesspool of discrimination and professional misconduct described in the ads.

According to the Partnership for Public Service, a nonprofit whose mission is to improve the federal civil service, the CFPB was ranked as the eighth best mid-size federal agency to work for in 2015, out of 23. It beat out the Department of Education, the Federal Communications Commission, and the Small Business Administration, which placed last in the category.

Ellison and other Democrats are frustrated that the CFPB is held up as an exemplar of Washington bureaucratic dysfunction while similar problems exist elsewhere.

“I think the CFPB is very close to being an institution that is warmly embraced by a broad cross-section of the American people,” Ellison says. “They want to stop that before it sets in.”

“They call themselves [Protect] America’s Consumers. Are they a consumer advocacy group? They offer no services at all. What I think they’re doing is planting suspicion about the CFPB in the minds of the listener.”

In the meantime, Ellison is optimistic the attacks won’t set in, but he’s angry that Protect America’s Consumers hasn’t responded to his requests to retract his quote. The only engagement Ellison has gotten from the group, he says, is “trolling” on Twitter. He says he is considering filing a formal complaint with the Federal Communications Commission over the ad.

“These people have a lot of audacity to falsify my words in such a brazen way. It’s pretty bold.”

Rep. Keith Ellison supports the Consumer Financial Protection Bureau. So why is his name being used in an attack ad against it?