If familiarity breeds contempt, then the voters of Minnesota’s 8th Congressional District are in for an especially nasty seven months.

In this year’s U.S. House election, Democratic Rep. Rick Nolan faces Republican businessman Stewart Mills for a second time. In 2014, Mills and Nolan waged a close political battle that resulted in a 1.4-point, 3,700 vote victory by Nolan — and a $17 million combined price tag.

Last year, Mills announced his intent to again challenge Nolan, and has again received the full backing of the Republican Party in the district and in Washington. Republicans feel good that their candidate, though he fell short last time, is well-positioned to win this year.

But 2014 was a cycle that swept many new Republicans into Congress — if the wave failed to lift Mills last time, why would he have a shot in a presidential election year, which tend to favor Democrats?

Minnesota Republicans’ rationale for why the presidential advantage is a non-factor down the ticket — in the 8th District and elsewhere — is that Hillary Clinton, the likely Democratic nominee, is unpopular with independents and unable to rile up the party base.

The thing to pay attention to, Mills and others say, is the lack of a statewide contest for governor or U.S. Senate — something that happens only once every 12 years in Minnesota.

In a recent sit-down with MinnPost, Mills argued that it wasn’t Nolan’s popularity, but Franken’s, that carried the incumbent congressman to victory last time. Franken won the 8th District by nearly 11 points in 2014, his best margin of victory in any congressional district outside the Twin Cities metro area.

“The consensus is that it got away,” Mills said. “Hindsight being 20/20, you could never have thought that in a wave election year, that Al Franken would have won, let alone won by 10 and a half percentage points.”

And then there’s Trump. Republicans in the district, regardless of their feelings on Trump’s politics, acknowledge he could drive historic voter turnout for their side, which could sweep Mills into office. Though Trump finished third in the Minnesota caucuses, CD8 was his best district, where he only barely lost to Sen. Ted Cruz.

According to Jerry Kortesmaki, a Duluth business owner who’s active in district GOP politics, the “Trump factor” has generated as much excitement he’s seen on the Republican side in years. “People who haven’t voted in years who say they’re going to get out to vote… There’s more excitement on the Republican ticket than there is on the Democratic ticket,” he says.

Democrats are skeptical that a presidential election year will be unfavorable to their candidate. Even if voters aren’t particularly enthusiastic about Clinton, the likely Democratic nominee, past turnout figures confirm that more voters show up in presidential years than in midterm years, regardless of who is running statewide.

In 2014, 266,000 voters in the 8th voted in the Nolan-Mills race — the weakest midterm year turnout since 1998, an indicator that would tend to benefit the Republican candidate.

By comparison, in 2004 — the last election cycle in Minnesota in which there was no governor or U.S. Senate race, but saw Sen. John Kerry attempting to deny President George W. Bush a second term — just over 350,000 people voted. In the last six elections, turnout over 350,000 has led to a Democratic win in the House race.

Beyond that, national Democrats are predicting a completely different Trump effect: they believe the candidate will be a dead weight on GOP congressional candidates, and they will likely attempt to tie down-ballot candidates like Mills to the controversial businessman.

Democrats in the district are optimistic that Trump in the general election might motivate high Democratic and independent turnout — the idea being, if those voters aren’t especially enthusiastic about supporting Clinton, or even Sen. Bernie Sanders, they would be committed to turning out to stop Trump. Those same people, then, would likely vote for Nolan down the ticket.

If Republicans are worried about that, they aren’t saying so.

“I don’t have to worry about Franken, Klobuchar, or Dayton. It’s Hillary Clinton or Bernie Sanders, and either one is an anchor on Rick Nolan’s neck,” Mills said, adding that Clinton was polling “underwater” in the 8th District.

During Mills-Nolan Round 1, the candidates tussled over gun issues, foreign policy, and mining issues, among other things.

But this time around, the campaign takes place in the shadow of the worst mining industry downturn on the Iron Range in generations — something that will color many aspects of the race.

In Congress, Nolan has made advocacy for the mining and steel industries his bread-and-butter: he has inveighed against competitors who dump cheap, subsidized steel into the U.S. market, introduced a five-year moratorium on imported steel, and convened a meeting on the Range with top policymakers, including White House Chief of Staff Denis McDonough.

Expect Nolan and his allies to press Mills on his generally non-committal stances on trade pacts, like the proposed Trans-Pacific Partnership, which is deeply unpopular on the Range because it’s feared it’ll further hollow out the mining industry.

Mills told MinnPost that, while he has not taken a formal stance on TPP and continues to review it, he has serious reservations with the pact. He brought up the common talking point that the deal was negotiated in secret, so it’s possible he might come out against it — which would put him at odds with many in the GOP.

For now, some on the Range are already making hay of Mills’ position to tarnish his cred in the area. “What we’ve seen is that Stewart Mills doesn’t care about our issues,” says state Rep. Jason Metsa, who represents the Virginia-Eveleth area. “He hasn’t made a decision on the TPP agreement, which affects the Range and a good portion of the district. If Mills isn’t out there on those issues, he’s really missed an opportunity to show he was a different type of Republican.”

While Nolan positions himself as the candidate best equipped to protect the Range from steel dumping and foreign trade deals, the GOP may try to stick the poor state of the Range’s economy on Nolan.

Rangers who may have been loyal to Nolan and the DFL in the past might reconsider this year, says state Rep. Josh Heintzeman, R-Brainerd. “There are a lot of people who have been pretty faithful to one political organization saying something has to change, and Stewart has been articulating that from day one.”

Mills will likely attack Nolan — as he did last time — as a politician in lock-step with what Republicans call an anti-mining, overly pro-environment DFL. According to Seth Wellnitz, vice chair of the Kanabec County GOP, “We’ve just seen, unfortunately, that the congressman has done things in Washington that I don’t think supports mining, or mining families.”

The proposed PolyMet mine — which just passed a big procedural hurdle with the Minnesota Department of Natural Resources — figures to play a renewed role in Mills’ case against Nolan. As in 2014, Nolan will have to reconcile being a member of a party that can be skeptical of projects like PolyMet while backing the project himself. Wellnitz says that Nolan hasn’t really shown he is sufficiently committed to the project, which he says could be a meaningful boost to the region’s economy.

Some worry that Nolan isn’t getting much help from his fellow Democrats in St. Paul. Tom Rukavina, who was a DFL state legislator for 26 years and currently serves on the St. Louis County Board of Commissioners, referenced a letter which Gov. Mark Dayton wrote this month opposing mining projects in the Boundary Waters.

“That isn’t going to help bring out DFL turnout, quite frankly, it might anger a lot of people up there. I’m puzzled as to why [Dayton] needed to do that,” Rukavina said.

Mills family sale of Fleet Farm is a wildcard

In 2014, Democrats focused their attacks on Mills’ status as the wealthy scion of a retail empire — Mills Fleet Farm, an outdoor retailer based in Brainerd — and not-so-subtly suggested his high position in the company was not exactly based on merit.

This year, that line of attack may change, or get neutralized altogether. In October, the Mills family announced it would be selling the business; in January, it was reported that Kohlberg Kravis Roberts, a New York private equity firm, was purchasing Fleet Farm for $1 billion.

Those in the district wonder how both sides will try to use the company’s sale. Democrats may develop their Mills-as-Mitt Romney narrative by casting the move as a sell-out to a Bain-style, Manhattan outfit that only cares about bottom lines, not sustaining local jobs. But KKR has publicly maintained it is committed to Fleet Farm’s growth — so unless it closes any stores or announces plans to, it could get harder for Democrats to make that case.

Politicos in the district were divided on how effective the Democrats’ wealth-focused broadside on Mills was in 2014, including the infamous yachting, lobster-grilling ad, which still rankles in GOP circles. (Even the DFL’s Metsa said it was “BS.”) Still, Nolan won, so it’s hard to imagine national Democrats won’t pull a few pages out of the 2014 playbook.

Both sides gear up for the slog

While there are real differences between the 2014 and 2016 political landscape, at least one thing will be the same: this will be a competitive, hard-fought contest.

Beyond the cash picture, the geographic battle lines in the district will be the same as last time. The conventional wisdom is that Mills will need to run up the score in the southern end of the district, which has more in common with the conservative 6th District than with the Iron Range. In 2014, Mills’ highest margins of victory were on the southern and western edges of the district, from Chisago County up through Morrison County and the Brainerd area. 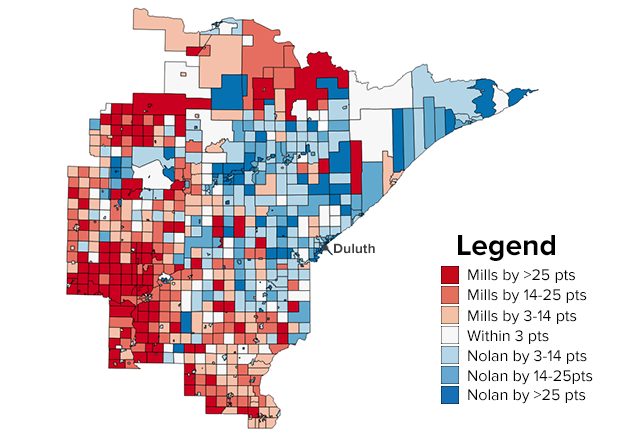 Source: Minnesota Secretary of State
In 2014, Stewart Mills’ strongest precincts were on the southern and western edges of the Eighth District, while Rep. Rick Nolan could count on DFL strongholds in Duluth and the Iron Range.

Nolan will need strong margins in Duluth and on the Range, even as Republicans are optimistic that Mills may finally begin moving that DFL stronghold into the GOP column — something that could be aided by the protectionist, tough-on-China talk from Trump.

But Rep. Metsa is skeptical. “It’s just disingenuous for Stewart Mills, if he were to come up right now, there’s not much he could do much differently to help on, he didn’t get involved in any of our hardship when we needed it,” he said. “I’ll be telling voters from my district, Rick’s been there for us.”

But Mills believes he can win over the Range, and that Minnesota electoral history is on his side. “Rick Nolan had to run twice to win, Collin Peterson ran three times,” he said.

“Stewart will come out this time,” he says. “He did get a haircut, for Pete’s sake.”

Stewart Mills is taking on Rick Nolan again — so what’s different this time?