WASHINGTON — Tater tots. Turkey. Velveeta. An homage to Prince, made out of crushed tortilla chips.

It may have been in Washington, but this year’s Annual Hotdish-Off couldn’t have been more Minnesota.

On Wednesday  — the 158th anniversary of Minnesota’s admittance to the Union —  most of the state’s congressional delegation gathered in a Capitol hearing room for the sixth iteration of the delegation hotdish-making competition, first organized by Sen. Al Franken as a way to build bipartisan, Minnesota comity.

That this year’s competition even happened was a relief: it was originally scheduled for March 16, but President Obama announced the nomination of Merrick Garland to the Supreme Court that day. Franken and Sen. Amy Klobuchar went to the White House, and the competition was postponed indefinitely, prompting sadness and sniping.

This year’s judging panel might be a testament to the rising stock of the Hotdish-Off: the Washington Post’s award-winning food critic, Tom Sietsema — a native of Worthington, in southwest Minnesota — judged entries this year. Sietsema, known for maintaining his anonymity in D.C., showed up wearing a hat and sunglasses.

Also on the panel were Sietsema’s 88-year-old mother, Dorothy, and Ryan Jensen, a native of Fergus Falls and founder of Peregrine Espresso, a popular D.C. coffee roaster.

After sampling this year’s entries, Sietsema told MinnPost more about his judging criteria. “I have to say, sort of the model hotdish is the one you grew up with, and my mom does one with wild rice and lots of fresh vegetables,” he said. “So I guess I favor those that had at least some fresh vegetables or some herbs.” 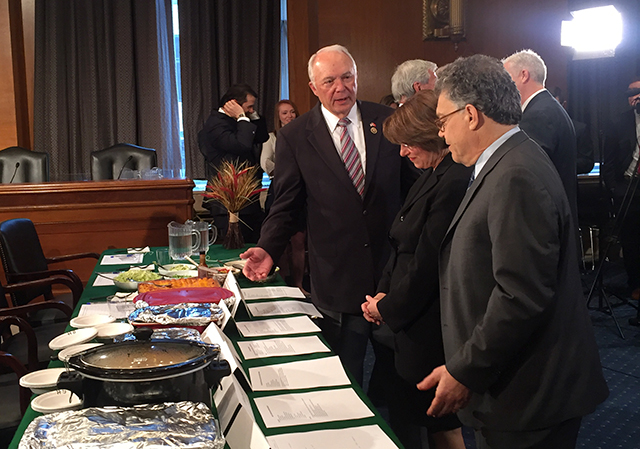 Sietsema added, “When I was eating some of these today, I was brought back to my high school cafeteria… These flavors call to us in some way. None were bad, though some were definitely better than others.” He said his personal favorite was Walz’s — which was presented alongside a “circus” of garnishes, like onion, lime, and avocado — which “stood out for the color.”

Jensen also said his favorite was Walz’s, and liked McCollum’s, too, which included bison, macaroni, cream of mushroom soup, and tater tots.

Left by the wayside this year were other creative entries from the delegation, including a Cuban-sandwich-inspired hotdish from Rep. Tom Emmer, which had ham, pulled pork, Swiss cheese and corn flakes. (The congressman has visited Cuba several times, and has been vocal about opening relations.) Rep. Keith Ellison’s hotdish didn’t place, but it may have stolen the show: the “Most Beautiful Hotdish in the World” was decorated with a Prince symbol made out of crushed blue tortilla chips — which totally looked purple in the right light.

Longtime hotdish observers noted the general trend away from the veggies and herbs Sietsema prefers, and toward cheese, meat, and tots. “A lot of sepia,” was how the critic described the year’s offerings. 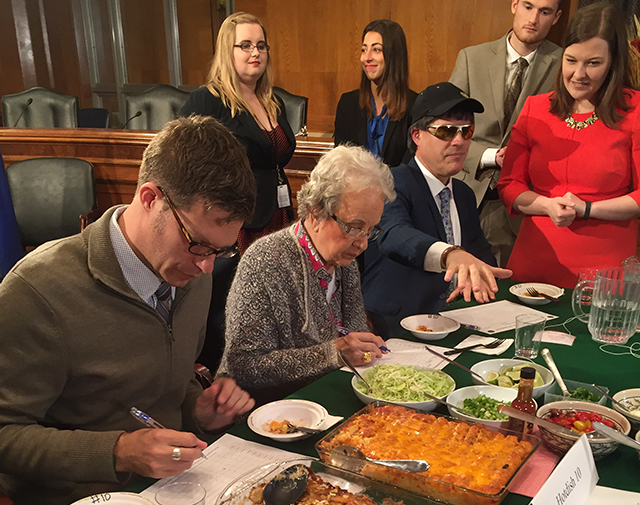 Another trend that continued, to the dismay of many, is Walz’s dominance. The 1st District Democrat entered the competition with swagger, trailed by staffers carrying his last two hotdish trophies. (An engraved pyrex hotdish plate is given to the winner.)

A proud Walz told MinnPost afterward, “This is where the dynasty stuff starts to come in. My mother-in-law out in Ivanhoe, Minnesota, will be very proud of this. When she has to talk about her son-in-law in Congress, she leads with this.”

Franken, the event’s emcee, reflected afterward on the growth of the Hotdish-Off he started six years ago. “At first, we only had one Republican, and that was Michele Bachmann. The last few years, we’ve had everyone enter, and so it’s just fun, it’s a fun thing to do.”

The senator referenced the instance in 2012 when Bachmann said that Ellison was connected to the Muslim Brotherhood. “My first thought,” Franken said, “was, ooh, I think that’s gonna be awkward at hotdish. But they weren’t awkward at all.”

When asked if the tradition speaks to how well the Minnesota delegation gets along, Franken said, “It sort of does! We do get along.”

Recipes for all the entries in this year’s competition were posted by Franken on his website. 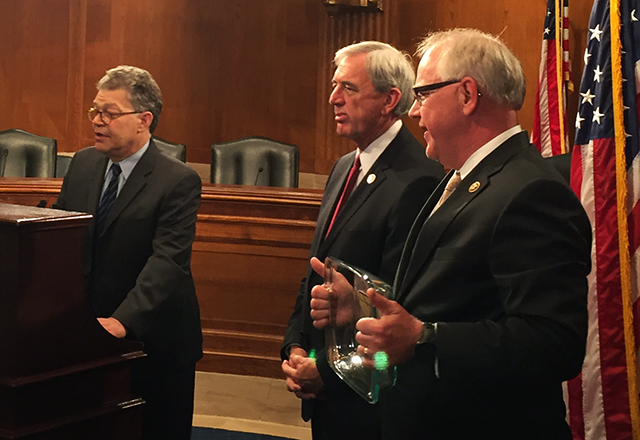