This project is made possible by a grant from the Bush Foundation.

MinnPost has assembled a panel of leadership experts and scholars, who will rotate in commenting on each of what will be 24 examples of leadership profiled in our yearlong series, Driving Change: A Lens on Leadership. Today William Joynes, a former city administrator who directs the Center for Public Administration and Leadership at Hamline University, and former St. Paul Mayor George Latimer, now a professor emeritus of urban studies at Macalester College, comment on issues presented in “Seeing its model was unsustainable, Beltrami County focused on results — and got them.” 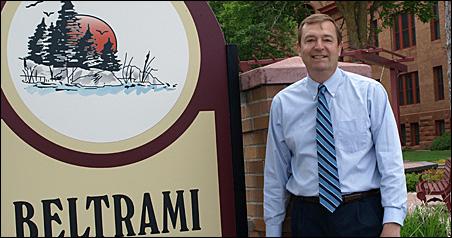 MinnPost photo by Sharon Schmickle
Tony Murphy joined forces with leaders in some other counties to lobby the Legislature for new flexibility.

The genesis of leadership in Beltrami County was the trust created between Tony Murphy, the county administrator, and the elected commissioners he serves.

Trust is the “salient synergy” in government leadership, said George Latimer, the former St. Paul mayor and University of Minnesota Regent who now is a professor emeritus of urban studies at Macalester College. 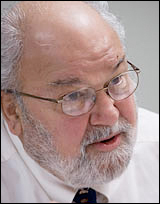 “Once you have a level of trust with people, you give each other pretty wide latitude,” Latimer said. “It is so important.”

And it can’t be taken for granted.

“It’s not always easy to document,” Latimer said. “Sometimes you think it’s there and one incident can just blow you out of the saddle.”

Erosion of trust
In recent years, there has been serious erosion of trust between elected officials and bureaucrats, said William Joynes, who directs the Center for Public Administration and Leadership at Hamline University. One of a local administrator’s basic jobs is to provide facts and information elected officials can use to make decisions. Murphy did that by looking ahead and warning the commissioners of future peril for the county.

In today’s politically charged atmosphere, it is remarkable that the commissioners heeded his warning.

The very determination of “truth” has become a partisan exercise with different people demanding different truths as they want them told. Further, it has become politically lucrative to campaign against the bureaucracy and to target bureaucrats as the enemy.

“We used to be relied upon to give neutral information,” Joynes said. “We now are considered to be one source among myriads of sources of information. And whether elected officials believe the information or not is sometimes a party issue. So it gets much tougher.”

The climate is so polarized that there are constituencies for success and failure in and of themselves. 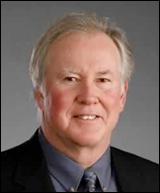 Moreover, citizens demand continuity from local government. Say you put in a tough day at work. When you finally leave the office, you expect to drive home on roads that are passable. You take it for granted that the garbage was collected that day and the water will flow when you turn the faucet. You trust that police and fire will rush to the rescue if you need them. And there will be a safety net for your aged parents.

Any disruption in that routine is a distraction you didn’t want.

“It’s a really tense situation for most people,” Joynes said. “They want things to stay the same.”

Thus, the safest tactic is to sit tight, avoid risk and maintain the status quo.

Not only did Beltrami County’s leaders embrace change. They invited county staff to take risks!

Murphy abandoned the safety of the status quo. He also vigorously promoted the county’s ideas for change as he joined forces with leaders in some other counties to lobby the Legislature for new flexibility.

In doing so, Joynes said, Murphy attracted attention and defied the longstanding maxim for local administrators: Whenever there is a chance for you to stay out of the newspapers you take it.

“So it took courage to do this,” he said.

Hard to define, hard to measure
Still, it remains to be seen how far Murphy and like-minded officials can lead Minnesota toward the goal of judging local government services by their outcomes.

“It is really difficult to measure outcomes in human services, and it’s arguable what outcomes we want to achieve,” Joynes said. “You are lucky if you have outcomes that are in fact measurable.”

Certainly counties can evaluate success when they build roads and plow streets. They have far less control when they try to break up domestic violence or counsel kids who tangle with the sheriff.

“It is much more difficult when you are dealing with the human side of the equation,” Joynes said. “What’s a successful outcome there? It’s hard to say and hard to measure.”

And the relevant questions always are complicated by philosophies of the government’s proper role. Whole constituencies call for government to stop providing medical care, chemical-dependency treatment and other human services. Still others insist that such programs are critical.

So how do you judge an effective outcome?

Difficult but worthwhile
Despite the complexities, Joynes said the pursuit of good outcomes is “absolutely” worthwhile at some level.

“There is an obligation on the part of administrators to do that as best possible,” he said.

Latimer, who has worked for years on a project to help the homeless, said there are valid measures of achievement and outcomes even when 100 percent success is not a realistic goal.

Say an addict who has been living on the streets for 10 years gets help and then is able to pay rent and stay in one home for a year. Whether or not that person is free of drugs or alcohol, there has been a “documentable improvement in well being and the ability to function in society,” Latimer said.

Passion for making a difference
Latimer also noted that Murphy’s religious faith likely contributed to his ability to lead and make a difference.

A humanist nonbeliever could hold the same conviction, he said, adding that wherever it comes from, what’s important is the notion of salvation, “the whole notion that we can’t be trapped by the worst things we ever did.”

A true leader in public office needs some aspiration of that conviction, especially when human services are involved, he said.

“However modest Murphy might be, there has got to be a passion that this is important stuff, making a difference in people’s lives,” Latimer said.

Seen that way, the old icon of the leader on a white horse has been surpassed by the model of the servant leader.

“It’s not about Murphy,” Latimer said. “It’s about getting things done for the people.”