News
Driving Change
This project is made possible by a grant from the Bush Foundation.
Nov. 27, 2011

MinnPost has assembled a panel of leadership experts and scholars, who are rotating in commenting on each of what will be 24 examples of leadership profiled in our yearlong series, “Driving Change: A Lens on Leadership.” Today graduate students in integrative leadership from the University of Minnesota comment on aspects of leadership presented in “Nathan Johnson helped Pine City accept gays.“

There are leaders with titles: CEO, dean, president, etc.

That isn’t Nathan Johnson, although he holds an official title in Pine City, Minn. His leadership example presented in today’s profile doesn’t rest on a title. It’s more subtle, but nonetheless powerful, said graduate students from a class at the Center for Integrative Leadership at the University of Minnesota’s Humphrey School of Public Affairs. 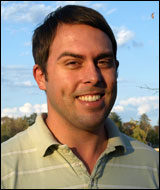 A team of the students agreed to comment on this profile. So we met on campus to discuss the nature of leadership over a pizza lunch.

“Leadership comes in all shapes and shades,” said Anne Hussian. “It’s not just the people with the big titles working with the big companies and big organizations.”

“People are making decisions all of the time that have impact, and they are making choices about how to lead their lives with values and integrity,” Hussian said. “It happens in the community and it happens in the business environment.”

Your friend, your neighbor
In this case, Johnson is helping to lead his community and his region toward acceptance of the gay men who live in East Central Minnesota. He had standing in the community where he grew up, and he draws from that to serve his cause.

“No one could say that he was ‘other,’ that he was from somewhere else or he was trying to invade Pine City with this pro-gay agenda,” said Amelia Brunelle. “All of those things tend to get thrown around when there is really strong opposition on any topic. It’s easier not to embrace something when it’s coming from the outside.”

It was particularly effective for Johnson to be able to say: “I am gay. I also am a leader in our community, and I’m your friend. Those all go together,” she said.

Many kinds of courage
Still, it took courage for Johnson to come out in the first place and then step forth for the cause, the students said, especially given that another gay man from his hometown had been murdered in a hate crime in Minneapolis.

“He was willing to stand up and be a really public figure,” said Nora Riemenschneider. “That showed leadership and courage because he was willing to let everyone know he was gay, especially with the risk that entailed as far as violence that other gay people had experienced. He became a spokesman, and that took a lot of guts.”

Credit for courage extends beyond Johnson to his supportive family and his fellow members of the East Central Minnesota Men’s Circle, said Seogjoo Hwang.

Brunelle added: “It certainly didn’t hurt that there was an existing group of gay men who were meeting in that region of Minnesota. … It’s easier to have courage when other people have courage and you can build on it. It can be exponential.  I think it would have been hard for Nate to just wake up one morning and say, ‘I’m going to advocate for GLBT rights in my community. This is a process, and you can’t do processes by yourself. So the courage of those other people created stepping stones.” 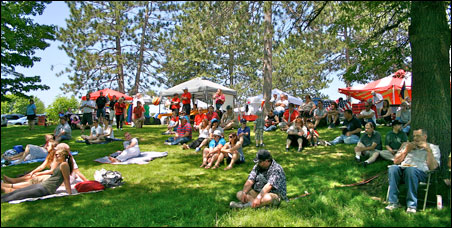 “I was raised in a suburb of Atlanta in a very religious area, and while most of my friends are younger than Nate, some of that resonated,” Brunelle said. “Though I’ve never known anyone who got physically hurt because of coming out as a gay person, I definitely know people who have been disowned by their closest family for many years.”

Then there is the risk of being different and thus of being rejected, she said.

“Sometimes that’s an emotional risk and sometimes a physical risk, but people at a young age — at a high school level when you are starting to realize these things about yourself — have to face risk really early.”

Leading transformation
Often, though, risk and controversy can foster leadership.

“Leadership is needed at the place where contrary world views are present,” said Merrie Benasutti, associate director for student initiatives at the leadership denter. She coordinated my meeting with the team.

A combination of need and the right leader at the right time can transform large numbers of people.

“Leadership is transformational,” Hussian said. “It’s not just transactional in the deals that you make and the sponsors that you coordinate and the picnics that you build. It’s about how you transform the environment in which you are operating.”

Johnson helped pull a veil from truths that had long been hidden in his community. That helped transform the community’s attitude and also the way gay people saw their role in the community, she said.

In a sense, Johnson and the men in his circle were doing community development work, Brunelle said.

“What he is doing is developing a community to be more whole and less fragmented,” she said. “You would not want a city to have just pockets of rich residents. That doesn’t make any sense. You would rather have the whole thing be well off and balanced economically.”

It follows, she said, that “you would want a community to be more whole and homogeneous in the way people are respected and have rights and collaborate together.”

Caring about people, community
It was important that Johnson bring youthful vitality as well as skills in planning and communication to the cause, Hwang said. Equally important was Johnson’s concern for others in the community — gay and straight alike.

Those attributes combined with courage add up to the integrative leadership that can advance the common good, he said.

“He integrates contrary views into some coherent unity,” Hwang said.

Ready for an open window
Timing was important too, Brunelle said. Apologizing for sounding “nerdy,” she said the literature on leadership emphasizes the concept of policy windows.

“When your issue comes up, you have to be ready with something to present as a solution to this problem that you’ve identified, probably before it was on the public radar,” she said.

The Men’s Circle had identified the need for gay men to find support in East Central Minnesota. Johnson added his abilities when the timing was right.

“He was ready,” Hussian said.

Next?
I asked the students what Johnson and his group could do next to lead their cause in East Central Minnesota.

Considering the problems Minnesota has seen with bullying in high schools, there is much more work to be done, Riemenschneider said.

“If they could extend the feeling of Pine City’s supportive and safe environment into the schools, that would be something,” she said.

Chen Dong Pi agreed that education is an important next step.

“A reason why society is not accepting this is because people don’t have full knowledge of what makes a person have this sexuality,” he said. “So if they can educate the younger generation and make this knowledge of sexuality more widely known, then I would say this would not be as much of a problem for society.”

‘Driving Change’ panel: With standing in the community, Nathan Johnson didn’t need a title to lead