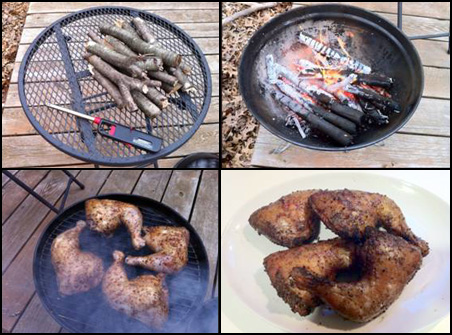 Gas grill or charcoal? For more than 30 years, backyard barbecue chefs have had essentially the same two choices, neither completely satisfying.

Gas grills cook quicker and cleaner than charcoal, but add little outdoorsy flavor to the chicken and chops. Charcoal adds flavor but is messy, fussy and slow. Both methods are polluting, in different ways, and either can be a costly indulgence compared to cooking indoors. Indeed, both seem to get a little more expensive year by year, as grills get larger and the offerings of specialty charcoals expand.

But what if there were another way? A way of grilling that was flavor-rich, reasonably convenient, inexpensive — and earth-friendly, besides?

The little flame of a big idea appeared above Jim Rogers’ head as he read an essay on sustainable forestry in the developing world. In many countries the No. 1 energy problem is getting enough firewood for cooking, which often leads to the No. 1 environmental problem: deforestation.

Envisioning villagers gathering sticks and branches for their fire pits, he realized that free, clean fuel for his Weber lay all around his home in the Mac-Groveland neighborhood of St. Paul.

So he began to gather windfall branches — first from his own yard, then from other yards along his dog-walking routes — and to experiment with a way of grilling steaks that was both primeval and new. Also, better for the environment than either gas or charcoal.

Now is a good time to point out that Rogers, a writer and editor at the University of St. Thomas, is no back-to-the-land zealot or global-warming scold. His 19th-century house is an “energy nightmare,” he says, heated with an elderly, gas-fired gravity furnace, but he has forgone insulation, window replacement and other conservation measures because “we know people who have spent tens of thousands of dollars on those things without making much difference in their gas bills.”

However, Rogers does appreciate the difference in global climate impact between burning fossil fuels like coal, oil and natural gas — which load the atmosphere with carbon that had been locked up since the dinosaurs — and burning wood in a short, more natural carbon cycle.

He reasoned that the carbon stored in his windfall branches, were they left to rot, would soon be released into the air and soil anyway. The same could not be said of the wood in charcoal because of the fossil fuels that went into harvesting, carbonizing, packing and shipping it to market.

“Am I right in thinking that grilling over windfall branches is really zero-impact from a global warming point of view?” he asked. I think he is right, and I also think his analysis is an interesting example of “ecological intelligence” as laid out in the book of that name by Daniel Goleman.

Goleman’s hope is that “knowing the hidden impacts of what we buy can change everything,” if we make it a point to follow three simple rules: know our impacts, favor improvements, share what we learn.

Notice, though, that Rogers isn’t giving up anything in deciding to fire his barbecue with windfall instead of the premium-priced “cowboy charcoal” he had been buying. He was going to have to clean up the brush and dispose of it anyway.

It’s as if he stepped into the debate over paper vs. plastic grocery bags and said, “Hey — what about cloth?”

Obviously Rogers cannot be the very the first person to hit upon the idea of repowering his backyard grill with wood, but an hour of Googling around failed to turn up more than a few other folks who are doing anything very similar (and posting about it).

What is going on at the fringes of American grilling, to judge from articles in the foodie press, is wood-fired grilling on a grand scale — achieving campfire flavor with elaborate stone fire pits and grills so large they require a vehicle to tow them around, stoked with fireplace logs. Much of the appeal seems to be in one-upping fellow foodies and/or replicating the offerings of trendy wood-fire restaurants.

This has no appeal to Rogers. “We are not foodies by any stretch of the imagination,” he emphasized. “I put ketchup on everything, and I like to eat a lot of unhealthy red meat.”

What does light him up is experimenting with different wood selections, fire sizes, and grate placements and so on, paying attention and seeing what happens next:

“Oak is just a beautiful wood — slow-burning and hot, with a deep glow. Silver maple is like kerosene — too hot, too fast. Birch is just as bad. Basswood burns OK but it has a terrible, stringy bark that just won’t let go when you go to break it up.”

He never uses pine, because of the acrid flavor it pumps into the food. But he has an apple tree and plum tree in his yard, and uses their branches to add subtle, and subtly different, flavors to meats. Sometimes he uses lilac, a heavy and dense wood that smells like incense when it burns and adds a flowery flavor to certain foods.

And while he tends the grill he also savors the experience of being more connected to the natural world. Indeed, he has begun to take note of especially promising dead branches on his neighbors’ trees, waiting for the wind to bring them down.

Nobody has yet objected to his fuel-gathering from their lawns. “My guess is they’re happy to have the brush removed. I would have been — wouldn’t you?”

As it happens, brush disposal has become a more significant chore for me since I moved to a wooded lot. So I was eager to test Rogers’ methods using (1) a miniature Weber I’ve had but hardly used in the last 25 years of gas grilling, and (2) some of the buckthorn I’ve been piling up in an eradication campaign that will never, ever end.

The first result was four leg quarters of chicken that were the tastiest I’ve had in many years, either at home or in a restaurant, prepared in under an hour. Since then I’ve done pork ribs in an old gas grill, over a wood fire built in baking pans laid atop the lava rock, and skewers of yakitori chicken on a hardware-store hibachi. No disappointments so far, and I’ve rediscovered yet another benefit of campfire cooking — wood smoke keeps the bugs at bay.

If you want to test this yourself but haven’t built a campfire for a while, here’s what to do: