Last week, in New York, agents of the Environmental Protection Agency announced they had seized thousands of packages of illegal rat poison from China.

The products violated federal law in two ways. First, the formulations were up to 60 times more potent than permitted for household use, and legally available for use only by professional exterminators wearing protective gear.

Second, the packages weren’t childproof — in fact, they were the opposite. Colorful and almost English-free, they resembled boxes of Chinese candy or toys. 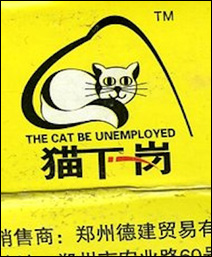 Courtesy of dec.ny.gov
Chinese rat poison carried a cartoon kitty and no English except “The Cat Be Unemployed.”

Each contained enough anticoagulant to kill a child — indeed, enough to nearly kill an adult woman who reportedly mistook the contents for Chinese medicine.

That near-fatality was cited as the trigger for a four-month investigation leading to these raids, but the timing suggests another factor.

The products were seized under an EPA ban that took effect only this past June, after 30 years of pressure from public-health groups and a typically long rulemaking process replete with industry challenges, political interference and court battles.

It’s an enduring American myth that commerce in this country is overburdened with all kinds of silly regulations, and especially with silly environmental regulations. More often than not, the villain’s role in this narrative is reserved for the EPA, whose principal crime is killing American jobs with useless rules and product bans.

Nearly all the Republican presidential contenders are in favor of bashing if not outright abolishing EPA, the lone exception being Mitt Romney, who offers the queasy endorsement that he supports the agency “in much of its mission, yes; but in some of its mission, no.”

In the party’s weekly radio address on Saturday, Sen. Susan Collins of Maine called for a “time out” on federal regulations across the board until their impact on jobs could be weighed. Her leading example was an EPA regulation, one of many that House Republicans voted on Friday to block in a broadside attack on EPA’s regulation of industrial air pollution. The complaint is that EPA fails to take into account the economic impact of its regulations — conveniently ignoring the fact that the Clean Air Act expressly bars it from doing so.

Yes, there are economic studies showing job losses attributable to EPA actions and other federal regulations. There are also studies showing job gains. But facts are insufficient to overcome opinions that are more reflex than reason, which is why nobody has ever lost an election by bashing EPA.

For a swath of Americans much broader than the Tea Party and the Libertarians, there is an almost reflexive logic that goes like this: Regulating the way something is done must drive up the cost of doing it. This must drive up the price that must be charged for it. That must create pressure to drive down others costs, like payroll. And there go the jobs.

There’s another dimension to the myth, too, which is less about fear than false security. It’s the assumption that after 40 years of government oversight proceeding from the landmark environmental- and consumer-protection laws of the 1970s, the important work of protecting public and environmental health must be done by now — that any product reaching the store shelves must have been scrutinized, covered with warning labels and pronounced OK.

Ask yourself: Are you at least a little surprised to learn that, in a country whose agencies protect children from choking-size trinkets in their happy meals, it was legal until June to sell exterminator-grade rat poison, over the counter, to anyone who wanted it, in a box that looked like a toy?

Let me underline here that I am not anti-pesticide. Far from it.

For a few years in the late 1970s, I lived in a Manhattan apartment where roaches were permanent fixtures and where I was startled, one sleepy morning, to walk into the kitchenette and find a rat sitting on the toaster. Pesticides were a dinner-table topic as we all compared notes on the best poisons to use as supplements to the super’s periodic applications.

I now live in a place sufficiently rural that, each winter, mice come into our cars to nest in large numbers and unbelievable places. I used anticoagulant poisons against the invaders without moral qualm and might be using them still if I hadn’t tired of picking their little corpses out of the glove compartment, the cup holder, the work boots.

So it was for practical, not ecological, reasons that I switched to a nontoxic repellent. (Eco-tip of the day: Forget what you’ve heard about dryer sheets and mothballs, they don’t work. But a bit of cloth or cotton dipped in peppermint oil keeps the mice at bay and smells terrific, too.)

The point is, you can be a pesticide user and still recognize that these poisons are quite dangerous in the wrong hands. Say, the hands of a 5-year-old. Or parents who figure there’s no way the kids or the dog will find a little bowl of pellets in a saucer way at the back of the cupboard under the kitchen sink.

It’s hard to know just how many kids are harmed each year by that kind of bad judgment, but it’s probably fair to take as minimums the reports gathered each year by the American Association of Poison Control Centers.

Its report for 2009, the most recent I found online, recorded 9,470 exposures of children age 5 or younger to anticoagulant rat poisons, and in 2,821 cases the exposure was serious enough to warrant clinical treatment. Those numbers rise and fall from year to year, and 2009’s tallies appear lower than average.

Most Americans would probably consider 10,000 child poisonings per year a good reason for taking some preventive measures. And they might be appalled to learn how long and difficult the road to these regulations has been.

EPA’s first rules to childproof the new generation of anticoagulant rat poisons came out in 1998, after many years of pressure from public health and environmental advocates (careless use of rat poison is a threat to wildlife, too).

Initially, manufacturers were required to make the poisons taste bitter, in hopes this would discourage children from eating them, and also treat them with a bright dye, as a tipoff to Mom if they ate them anyway.

But some manufacturers — not all — objected that the bitter taste might repel rats, too. And in 2001, with a new administration calling the shots at EPA, the pesticide companies were invited in for an airing of their gripes. The rules were withdrawn.

This prompted a lawsuit by the National Resources Defense Council and West Harlem Environmental Action. In 2004, a federal judge found that EPA “lacked even the proverbial ‘scintilla’ of evidence justifying its reversal of the requirement it had imposed, after extensive study, only a few years before,” and ordered the EPA to reconsider its reversal. Seven years later, the new rules took effect.

Note that the rules do not actually ban any pesticides, but only restrict their sale for “residential use” by do-it-yourselfers. Superstrength rat poisons are still available to licensed exterminators, and also to farmers and businesses for non-household use. So are so-called “loose baits” — poison pellets not enclosed in child- and pet-proof boxes.

The ordinary homeowner can still buy regular-strength poison, packaged in bait stations. (Which is actually a time-saver, I can tell you – back when I was treating my car, I had to improvise my own bait containers to make sure the cats couldn’t get to the stuff, and sometimes tweeze rodent remains out of tight places.)

Even these restrictions are too much for d-Con’s manufacturer and three other pesticide companies. They’ve announced that they will ignore the new rules and challenge EPA to a court fight.

Their pitch is that the risk to children has been exaggerated, since only a small portion of the poisonings result in hospitalizations and deaths remain rare. They also feel their products’ role in reducing rat-borne illness hasn’t gotten nearly enough press. Finally, they complain that some homeowners may be forced to hire exterminators when over-the-counter treatments don’t work.

On that last notion, I suppose they have a point. But let’s look at the silver lining — it might also create some jobs, and in a sector where the work can’t be sent overseas.