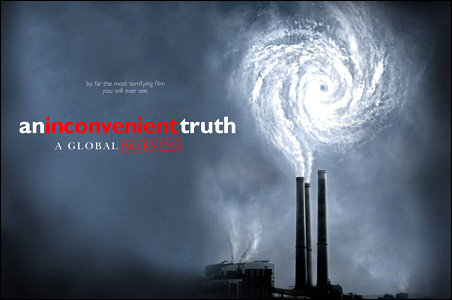 www.climatecrisis.net
Americans’ views on climate issues are both fluid and nuanced, and the opinions they share with pollsters are sensitive to just what they are asked, and when.

Are Americans turning their backs on global warming?

Conventional wisdom is that we are, as demonstrated by opinion polls from recent years: concern over climate trends has declined, doubt about climate science has risen. Such polls — or at least the headlines and impressions they’ve generated — were a prime mover behind Al Gore’s reprise of “An Inconvenient Truth” via global webcast last week.

But the polling picture is way more complicated than a couple of trend lines. If you look beyond the marquee surveys from Pew, Gallup and others that get the steadiest media attention, you’ll find that Americans’ views on climate issues are both fluid and nuanced, and that the opinions they share with pollsters are sensitive to just what they are asked, and when.

For those of us who think global warming is both real and dangerous, and that immediate action to reduce greenhouse gases is necessary, the truth of American public opinion is not so much inconvenient as inconsistent, occasionally incoherent — and in some respects encouraging.

Let’s look first at a representative sample of the bad news, from Gallup’s polling. Not only does the Gallup brand carry well-earned credibility, some of its climate questions have been part of the annual poll on environmental matters since 1989. As any pollster will tell you, the most meaningful results come from asking the same question the same way over a long period.

Last March, Gallup again asked more than 1,000 Americans, “How much do you personally worry about global warming?” and 51 percent said they worried “a great deal” or “a fair amount.” That was the lowest number since 1997, when it was 50 percent, and well below the high-water mark of 72 percent in 2000. It continued a three-year decline from the more recent high of 66 percent in 2008.

But Gallup’s report tracing the history of this question also shows the worry level swinging wildly since 1989. There are years when it rose, or fell, by 9 points from year to year. Indeed, it climbed 22 points — from its overall low to overall high – in just three years.

Gallup has asked other questions over shorter periods of time, and the swings are less dramatic. The most recent results also show small increases in the proportion of Americans who believe that “pollution from human activities” has caused Earth’s temperature to increase (52 percent), and who feel the news they get about the seriousness of global warming is either correct or underestimates the problem (55 percent) rather than exaggerating it.

Gallup’s polling is not without its challengers. Last year, Stanford University researcher Jon Krosnick published an op-ed in the New York Times that claimed Gallup, Pew and others were overstating any decline in American concern about global warming, and that other polls (including his own) showed a different picture. His challenge (and the rebuttals from Gallup and Pew) center on disagreements about the best way to word poll questions.

But more interesting is how Gallup’s editor-in-chief, Frank Newport, called for caution in interpreting all the results:

“Certainly there are a number of possible explanations [for the decline] in addition to shifts in the short-term world temperature, including the controversy over some scientists who deal with global warming data, the concerted effort to criticize global warming among some conservatives, and the bad economy. … It is not totally clear what has caused [the decline], or how temporary or permanent it may be. It is also true that these trends are not so huge that they have flipped American public opinion on its head in a matter of a few years. But after a number of years in which those concerned about climate change have mounted substantial efforts to raise the consciousness of the American public about the issue, the finding that public opinion trends have moved in exactly the oppose direction is certainly significant — and deserving of full scientific focus.”

Now let’s consider some other, less trumpeted polls showing how strongly and consistently Americans support a range of solutions to the problem of global warming — even as they waffle in their stated worry about the problem itself.

Even the Tea Partiers, for whom climate denial seems an article of faith, support funding “more research into renewable energy sources, such as solar and wind power” and “providing tax breaks for people who purchase energy efficient vehicles or solar panels,” by margins of 2 to 1.

One way of explaining these results is that even those who don’t believe in global warming see other good reasons to make the shift from fossil fuels to renewables — like getting off oil before it runs out, cleaning up the air their children and grandchildren will breathe, sending less money to foreign countries they don’t like, building a new growth sector for the U.S. economy, and so on.

And here it must be remembered that public debate over global warming would have been decided long ago if not for a massive PR and lobbying drive by companies vested in business-as-usual energy systems — and, to a shameful degree, willing to rely on covert messengers and disinformation to defend them.

No doubt these tactics have helped to drive recent shifts in opinion on the simplest, true/false questions about global warming, at least temporarily. But on the campaign’s real objective — undermining public confidence in alternative energy, and building public opposition to greenhouse gas regulation — the battle isn’t going nearly so well.

What the polls really show about global warming