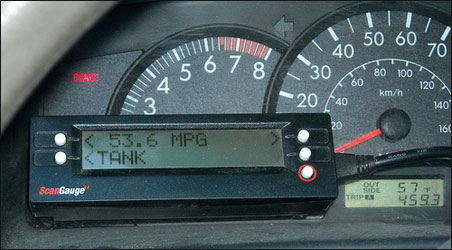 From Idaho comes news of the passing, not long ago, of Garbasio Fernando (George) Goiri. Well-known and well-liked around Caldwell, where he worked in a variety of cattle-related businesses, Goiri was also the inventor of a product whose fame spread far beyond his own — nationally, in fact.

According to his obituary in the Idaho Statesman, Goiri invented in the early 1970s “a patented kit of cow magnets that claimed to increase the gas mileage of a car.”

In fact it’s doubtful that Goiri’s Magnetic Fuel Saver was ever patented, as the U.S. Patent Office has this nitpicky little requirement about inventions doing what they’re represented to do.

Cow magnets dropped down the throat of a heifer do a good job for the bovine fuel system, by sequestering stray bits of barbed wire and other metal scrap that got into the feed.

As for attaching them alongside the fuel line of a vehicle, so as to draw the molecules of gasoline into a more favorable alignment for combustion — well, the idea is patently ridiculous.

No one should doubt, however, the obit’s claim that Goiri’s off-label use of cow magnets “gathered national attention with articles in TIME Magazine and the Wall Street Journal as well as an interview request from the Tonight Show.”

Americans have long nurtured an abiding enthusiasm for fanciful gimmicks that promise to boost their mpg in many a ludicrous way, and even in today’s more tech-savvy times, the marketplace is keeping pace.

Consider, for example, the new Fuel Doctor Platinum FD-47, a supposedly electronic device that plugs into the cigarette lighter/power socket of a car — mind you, it must be “the one closest to the engine” — and is said to boost mileage 20-30 percent.

It’s priced at just $59.99 plus shipping and handling but, alas, can’t be used in hybrids or electric cars.

The FD-47 apparently is too new to be considered for listing in the Federal Trade Commission’s bulletin, “Gas Saving” Products: Fact or Fuelishness?,” but several similar devices are discussed therein.

And after some 40 years, fuel-line magnets like George Goiri’s little kit still rate a prominent place in the consumer protection literature — and appear to be holding onto a niche in the marketplace as well.

There must be something about the quest for higher mileage, or outdoing the automakers, or outsmarting the international oil conspiracy, that suspends the process of common sense — the everyday reasoning that would lead one to say, well, you know, it’s probably not possible to stretch the gasoline by injecting electrolyzed water vapor into the fuel/air mix.

Or to recognize that if such technology were possible, every car on the road would already be equipped with it.

But what explains the obvious reluctance of the average motorist to do the few simple things — often cost-free things — that have been proven over many decades to boost gas mileage by margins that sometimes exceed the hucksters’ claims?

Hyper-miling and eco-driving
Recent years have seen a small surge of interest in, and media attention to, hyper-miling — an extreme form of fuel-efficient motoring that began as competition among the first adopters of gas/electric hybrids.

Its techniques are aggressive, often annoying and sometimes illegal — like coasting toward a stoplight in the breakdown lane to avoid being rear-ended by cars moving at normal speed.

Judging by day-to-day traffic, however, it’s a very small minority of motorists who bother with any of the more moderate fuel-saving techniques that nowadays are known as “green driving” or “eco-driving,” but have been part of driver education for longer than “fuel economy” has been part of our vocabulary.

According to ecodriving.usa, a site so mainstream it’s sponsored by the American Alliance of Automobile Manufacturers, the average motorist can boost mileage up to 33 percent through such simple adjustments as accelerating and decelerating gradually — yes, like you learned in driver’s ed — keeping top highway speed at 60 or below, planning errands to eliminate needless backtracking, and turning off the engine if the wait for a drive-through teller is likely to stretch beyond a minute.

A few routine, do-it-yourself maintenance items can achieve additional mileage increases in the 15 to 20 percent range: using the recommended engine oil (for a 1-2 percent gain), keeping tires inflated to the right pressure (3 percent), replacing a dirty air filter can (10 percent). An engine tuneup, no longer a DIY job for most folks, delivers an average mileage gain of 4 percent (and potentially much more, if the last one was a long time ago).

Only the tuneup is going to cost more than a couple of cow magnets.

A penitent’s progress
Lest I sound like an anti-driving scold (and before I’m called out by somebody who knows my habits), I will admit right here that I’ve spent much of the last 30 years resolutely ignoring each and every one of the tips listed above.

The thing is, I really like to drive. I like to drive fast cars. And for the last 15 years I’ve driven a Jeep whose baseline mileage was so poor I figured it was hopelessly beyond improvement. But I figured wrong.

About a month ago, after reading a piece about the hyper-milers, I decided to experiment with eco-driving techniques and see if I could better my years-long average of 16-17 mpg in a Grand Cherokee with a six-cylinder engine, automatic transmission and selectable four-wheel drive. I was skeptical; the results were amazing.

I went through two 22-gallon tanks of gasoline practicing my normal driving habits on the outbound leg of each trip, then resetting the fuel-economy monitor and eco-driving the return trip. Instantly the averages climbed into the 22-23 range, on a mix of one-third city driving and two-thirds highway.

The real stunner came when I removed the roof racks I use to carry a pair of sea kayaks. For years I’d been in the bad habit of leaving them installed from May through October. Removing them seemed to add 2 mpg in city driving and nearly 4 on the highway.

I’d read, of course, that extra wind resistance and weight are bad for mileage, but I never expected something this minor to make much of a difference with a vehicle that was already so high and heavy.

Now, there can be accuracy problems with these onboard gauges, but still — the early results were inspiring.

Not with a whimper but a bang
I wish I had more results to report, from a longer timeline and more accurate measurement methods. Alas, my embrace of efficient driving turned out to be a deathbed conversion for the Jeep, which registered its disapproval by throwing a rod clean through the engine block one morning on I-94.

Considering its age and manifold other problems (including a cracked exhaust manifold) it was time to send it to SUV heaven via my local salvage yard.

Now I’m shopping for a new vehicle, and with mixed feelings because our household needs include towing small trailers — which means an SUV, albeit a downsized model. None of the plausible options has the kind of mileage rating I’d prefer, but on the basis of other drivers’ carefully monitored experience, I’m reasonably confident I can do better than the EPA numbers.

Point is, any vehicle can be markedly more fuel-efficient if maintained carefully and driven correctly — driven mindfully is how I like to think of it now, because the single most valuable lesson from my short-lived eco-driving experiment was about the different kind of driving experience that results from slower, smoother motoring.

Flying across Montana on an open road is one thing, but day to day, in urban traffic, I didn’t really like being that guy who couldn’t stop being annoyed when other motorists slowed me down. I much prefer being the guy who takes his time — practicing the race-car driver’s trick of accelerating and braking so smoothly the coffee doesn’t slosh — and letting my lead-foot brethren grind on by, jaws clenched and eyes darting.

The whole experience got me to thinking of a quirky piece that ran in the New Yorker a couple of years ago, profiling Kenny (Mr. Traffic) Morse.

Morse is a Californian who invented “comedy traffic school” by introducing the stand-up form to state-mandated remedial training for traffic violators. Treating the reporter to a scrupulously law-abiding freeway tour in the L.A. area, he set the cruise control just above the posted limit of 65 (for safety’s sake, he said) and observed:

“People who aren’t used to it feel like they aren’t going anywhere, which is ridiculous. We’re going lightning fast. We’re going 65 miles an hour.

“I’m going the speed limit. That means I don’t have to do what all these other people are doing — watching the mirror for cops. Imagine this consciousness. What kind of person are you when you drive, that you’re watching your mirror for the police? That’s what criminals do.”

Man has a point. Try it and see for yourself.