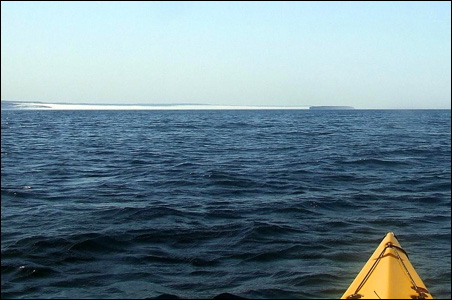 Part one of two articles
All day long the second-guesses kept up their pestering, like a toddler newly energized with the power of  Why?

Why are we going to all this trouble for a weekend on the water? Why does it have to be this weekend? Why didn’t we go when the weather was more predictable? Why must we go to the same islands every single year? Why not some other, closer place?

These were Whys of the unspoken sort, understand — the answer being, in each case, Because I promised Sallie we would.

On and on they droned, through eight hours of checking gear and gathering supplies, then on into four hours of driving north in the dark toward Lake Superior and the Apostle Islands.

I love to paddle a sea kayak in the Apostles, and there have been periods when I thoroughly enjoyed the outfitting, too — a challenge in equal parts technical, practical, spatial.

But it’s a challenge better met with frequent practice, and we haven’t been going out enough the last few years. Our calendars have been too controlled by Work in all its forms — new jobs, new home, new community. Meanwhile the gear, left unsupervised, became disorderly, disassembled, even disappeared.

Gear lists for a kayak trip on Lake Superior are necessarily long for reasons of safety and even, potentially, survival. Cargo volume is ample but sharply limited, so you can’t duck hard choices by just adding more stuff. And the space is oddly shaped, so packing the boat is a 3D jigsaw puzzle governed by three rules: Every cubic inch must be used, the weight must be evenly distributed, any item with emergency significance at hand.

So there was plenty to review during the drive north. But as the miles rolled up we talked about the trips of years past, calling up scenes of Lake Superior in place of the inky black beyond our headlights. As always, the chatter of second-guessing grew fainter as the mileage to Bayfield grew smaller.

And then it was a new morning, and we were trotting up the steps of the National Park Service with high hopes and no reservations.

The question of Why this weekend? was long gone, but the fellow at the desk on this first weekend of October had an answer anyway.

“Three nights? Well, pick any campsites you want. You’re going to have the place pretty much to yourselves.”

People going to the Boundary Waters often expect, sometimes demand, the experience of paddling for days without seeing another person. The Apostles typically offer less solitude, and in busier times it can be hard to find much at all.

On our last trip, August 2009, we had to take a campsite by the dock on South Twin Island, where three big powerboats moored together and broadcast country music through the twilight hours. Nothing against motorboats, or country music for that matter, but we can admire both at home.

We don’t come to the Apostles to get away from people or settlement but rather — important distinction here — to get closer to certain things, like the call of a raven, the music of water on rocks, a 360-degree horizon of natural objects only.

Usually that quest moves us farther out into the archipelago, but this time, with the place pretty much to ourselves, we opt for Sand Island — the nearest island, the rookie island, the group-camping island, the island with big docks and, still, inholders’ private cabins.

But Sand also has a lighthouse, sea caves, hiking trails … and a single campsite on the long beach of Lighthouse Bay, which looks out over nothing but water for the 25 miles to Minnesota’s North Shore. Until now, it has been our stopover on the way to somewhere else, but … Why not get to know it better?

Sighting statistics for three days on or within three nautical miles of Sand Island: 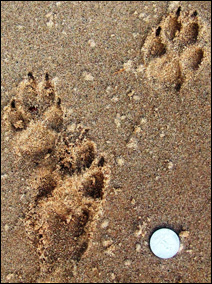 Other people, excluding boats above: 0

Persistent fog blankets the lake one morning, refusing to melt in pale sunshine. The weather radio suggests a day of shifting winds and waves up to four feet — not great for long crossings, and anyway we’re relaxing into Sand Island and the pleasures of staying put.

So Devil’s Island, 11 miles distant, can wait. And so can York, a sentimental favorite, nearer but off-limits now for herd-reduction deer hunting.

Then the map suggests an opportunity: Eagle Island, a five-mile paddle to the southwest. Like most Apostles visitors, we’ve never been there; it’s closed to landings most of the year to protect nesting sites. Worth a try, maybe? Let’s go have a look.

Thick mist softens the Sand Island shoreline into watercolor washes, wet in wet, and mutes the sound of water on the rocks. We dawdle west along the shoreline, staying in the shallows, looking and listening.

Round a final point and out there is Eagle, in a band of fog so thick the scene looks Arctic. We paddle out a quarter-mile to test the swells and find them just a foot or two, coming astern but nicely slow and steady.

Sallie is still a little unnerved by a following sea, which lifts and turns the boat on waves you can’t see coming. I had the fear knocked out of me in a white-knuckle training some years ago and now prefer this kind of paddling to all others, surfing down the llittle curls and timing my strokes to let the water do the work.

On the other hand, our last Apostles trip tossed us around on the edge of serious trouble, and that knocked some fear back into me. I’ve told her I’m over it, believing this the truth, but there are fears that sink below the level of reason, making homes in the body and the soul — until doing the fearful thing again summons them to the surface. So far, this trip has been a flat-water cruise.

All morning I’ve kept an ear to the shifting weather forecasts, with wave heights falling back to three feet or less, and Sallie has been keeping an eye on me.

But when we raft up to make the call, go or no go, there’s no question in either mind that we’re going to go see this new island, because: When will we get another chance?