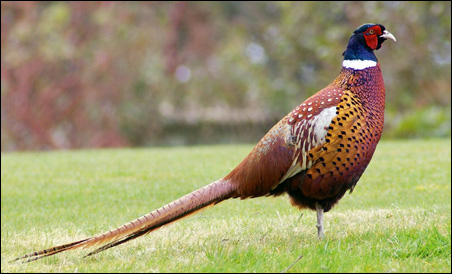 Wikimedia Commons/Gary Noon
The future for pheasants looks grimmer when you consider more than 550,000 acres of CRP are scheduled to expire in the next three years.

Game-bird counts and hunting forecasts are normally subjects for the outdoors pages only. This year, however, Minnesota’s first Governor’s  Pheasant Opener has brought wider attention to the state’s shrunken ring-neck population — and to land-use changes that have helped drive the decline.

According to the Department of Natural Resources, Minnesota’s pheasant population has fallen 71 percent below its 10 year-average. DNR predicts hunters will have their worst season since 1997.

Weather was a major contributing factor. We’ve had two severe winters in a row, which take a heavy toll on non-migrating birds, and last spring the nesting season was unfavorably cold and wet.

But even perfect weather can’t make up for habitat loss, and since 2007, Minnesota’s farmers have taken some 120,000 acres of land out of the conservation bank, returning it to crop production.

This trend is driven by high commodity prices, especially for corn, and is not likely to change soon. DNR Commissioner Tom Landwehr puts it this way:

Statewide, about 128,000 acres of CRP contracts will expire on Sept. 30, while only 33,180 acres were enrolled during the recent spring sign-up period.

The future for pheasants looks grimmer when you consider more than 550,000 acres of CRP are scheduled to expire in the next three years. As you know, CRP remains our No. 1 habitat program for pheasants. With high land rental rates and soaring corn prices, conservation practices are taking a backseat to market demands, and interest in CRP enrollment is likely to suffer.

CRP is the Conservation Reserve Program, which pays farmers to forgo crop production on acreage that is ecologically sensitive — along streams, for example — and, often, agriculturally marginal. Because this instantly expands habitat for pheasants and other game, hunters are often considered CRP’s next biggest beneficiaries after the landowners themselves.

But the benefits of land conservation, through CRP or otherwise, are shared much more widely than this. Expanding habitat for pheasants also pays off in additional territory for nongame birds and mammals. All of us gain when conservation reduces soil erosion, cuts fertilizer and pesticide inputs, and slows runoff into streams and rivers, yielding cleaner water downstream.

Two kinds of ethanol
Without question, ethanol production has been a big driver of increased corn demand and higher prices over the last five years (though not, perhaps, as big a factor as some might assume; a recent study from Iowa State assigns ethanol a one-third share of the responsibility). And certainly CRP payments are more attractive when crop prices are low.

But it seems at least theoretically possible that conserved land could provide farmers with a second income stream, if the grasses and other perennials planted as cover could be harvested periodically for advanced biofuels production — that is, for cellulosic ethanol.

Several years ago, University of Minnesota researchers demonstrated that plant communities typical of CRP lands could be an important source of ethanol — and with a much more favorable environmental profile. (The link is to an abstract; free registration is required for the full article.)

Acre for acre, their energy potential is higher than corn’s. Inputs of fertilizer and pesticides are essentially nil after the plants are established — same for irrigation, cultivation and other farm labor, until harvest time. Best of all, the plants sequester more globe-warming carbon in their deep root systems than is released by burning the ethanol they yield.

Of course, production of cellulosic ethanol has been a distant dream. In 2002, I toured the National Renewable Energy Lab outside Denver and saw a small but almost commercial-scale still that was being used to produce ethanol from pretty much any plant material you fed it — including scrap pressboard paneling. (Especially unforgettable was the intermediate, dark-liquor stage — a vat of fluid that looked and smelled disturbingly like Guinness).

Waste-based ethanol seemed just around the corner then, but 10 years have gone by and only now is the first project to produce cellulosic ethanol on a commercial scale getting under way. Poet LLC is building a cellulosic ethanol plant in Iowa, and two competitors say they’ll be in production by 2013.

Even if cellulosic ethanol comes online in a significant way, I’m sure some CRP rules would need to be relaxed to permit harvesting of grassland biomass for fuel stock. And if revised, the rules would still need to ensure that the conserved land returned ecological benefits comparable to those we’re all paying for now.

But it seems at least possible that somehow, someday, careful harvesting of these lands for advanced biofuels could add a third, balancing income factor to the seesaw of CRP payments and commodity prices, which lately has been working against conservation setasides.

Farming and conserving, too
As often, a particularly interesting take on the topic comes from Brian DeVore at the Land Stewardship Project, who points out that land can be farmed and still offer all the benefits of land conservation – including good habitat for pheasants.

Citing a study in the Journal of Field Ornithology, DeVore writes:

In localized areas adjacent to CRP ground (within about a mile), the finding — no surprises here — was that the more retired farmland there was, the higher the pheasant count. However, on a regional basis, the positive effect of CRP was canceled out by the negative effect of all that working farmland being converted from small grains, pasture and hayland to annual row crops. Overall, pheasant numbers went down in three of five regions studied, despite the addition of up to 8 percent more CRP grasslands.

In other words, there’s a limit to what retired farmland can do if it’s just an island of wildness surrounded by a domesticated black desert.

The answer, he says, lies in farming practices that yield both food for people and healthy habitat for wildlife — like raising grass-fed beef:

If future Pheasant Openers are to always feature the guests of honor — ring-necked pheasants — then we need more Moonstone Farms. This 5th-generation operation lies in the Upper Minnesota River Valley just outside of Montevideo. Its owner-operators, Audrey Arner and Richard Handeen, have converted the farm from a landscape dominated by annual row crops to a perennial, biodiverse system that produces high quality beef and healthy soil, while also providing habitat for a rich diversity of wildlife, including ground nesting birds.

(Land Stewardship organized a tour of Moonstone Farms earlier in the month, which led to a fine feature by the Strib’s Doug Smith.)

Pheasants and other benefits of conserving agricultural land