The cycle of seasons has taken a lurch toward winter, no doubt about it. Each day seems measurably shorter than the one before, and colder. October light is is a faded memory, displaced by sepia skies. The last leaves are piling up.

So are the Christmas catalogs. One recent day’s arrivals came to 3.6 pounds, according to the kitchen food scale, and prompted another entry — “Get off mailing lists” — on a to-do list that was already too long.

So much to get done before rough weather and the holiday swirl — including, perhaps, one last road trip before the roads ice over. A last goodbye to autumn landscapes. The chores will wait.

The snowbirds are already planning their warm-weather getaways, but some of us like to travel into winter rather than away from it. Such a person, looking for a place to go this weekend, could do way worse than heading north to Grand Marais, where the North House Folk School is presenting its tenth Winterer’s Gathering.

“Winterer” is not a typo but sort of an antique opposite for “snowbird,” referring to animals, birds and people who stay put for the winter in places like northern Minnesota. (Its most precise meaning, according to the Oxford English Dictionary, is found in Alexander Mackenzie’s journals of the fur trade, where it describes “a servant of the Hudson’s Bay Company who was employed in the far interior of N. America.”)

North House is all about preserving the traditional crafts and culture of the north woods, and this weekend serves as an annual showcase of its work. There are presentations on such subjects as winter camping, cold-weather survival skills and, hmm, contra dancing on snowshoes.

Indoor activities include the Arctic Film Festival, heavy on wilderness and expeditions, as well as presentations by the wildlife biologist Rolf Peterson, known for his 40-year study of wolves and moose on Isle Royale, and the polar adventurer Lonnie Dupre.

This year the Winterer’s Gathering is also serving as the centerpiece of a Legacy Destinations weekend, next-to-last in the year-long series organized by Explore Minnesota, Conservation Minnesota and Minnesota Citizens for the Arts. The series spotlights benefits returned to Minnesotans by funding from the 2008 Legacy Amendment; one of the grants helped finance a special exhibit at the Cook County Historical Society on Minnesota’s debt to the Civilian Conservation Corps.

The CCC had 16 camps in Cook County during the Depression, creating not only employment for local people but lasting investments in forest conservation, roads and recreation facilities. Oral histories and more than 150 photographs have been gathered for the exhibit, which can be previewed here.

Cook County also got its share of attention from another Depression-era public works program, the Works Progress Administration’s Federal Writer’s Project. Reading about the CCC exhibit sent me to the bookshelf for the WPA Guide to Minnesota, where I found this entry for Grand Marais, which then had a population of 618 and was

the center of a large summer-tourist traffic. This village has an excellent natural harbor, often filled with acres of floating logs to be converted into wood pulp; commercial fishing is the predominant industry. On an arrow shaped point of sharp, columnar, rose-colored rocks in the FOREST LOOKOUT TOWER (visitors permitted). Here, too, is the North Superior Coast Guard Station, which operates 25 boats. The village still has a fur-trading post; it also has a newly constructed airport.

And by 1938 it had as well, and thanks to the CCC, an improved and usually passable new road into the boreal woodlands — the Gunflint Trail.

If Grand Marais is a little far for a weekend jaunt, or if community festivals aren’t your thing, you might consider an end-of-autumn visit to Crex Meadows, just over the Minnesota line near Grantsburg, Wis.

Two hours of driving from downtown Minneapolis or St. Paul will bring you to a landscape of wide-open wetlands that’s a mecca for birders, hikers and hunters all year long, but especially during the migrations of spring and autumn.

A century ago, the wetlands of Crex were divided up with dikes to form paddies for the production of grasses used in making carpet. That industry is long gone, but the dikes remain as narrow roadways crisscrossing the refuge’s 30,000 acres and bringing visitors into sometimes startling proximity to cranes, trumpeter swans, the occasional black bear and, rarely, gray wolves.

For many, the biggest draw is the refuge’s large population of sandhill cranes, which nest there by the thousands through the summer. At this writing, fall migration was raising the sandills’ numbers at Crex to their annual peak, and large flocks of waterfowl were passing through — not just mallards and Canada geese but hooded mergansers, buffleheads, green-winged teal, snow geese and swans. Bald eagles and hawks were common. 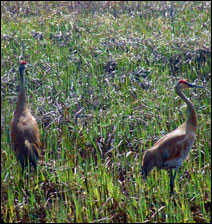 Crex also has an especially fine visitor’s center, with exhibits that not only aid in wildlife identification and understanding the surrounding ecosystem but delve into the area’s industrial and hunting history, including the “market hunting” era that might have extinguished waterfowl populations if not for the conservation movement it prompted at the turn of the last century.

But outdoors is where the real experience is — for panorama, for quietude, for birds and more birds.

Last spring, I watched a nesting pair of cranes as they fed on minnows and small frogs among the new green reeds, and at one point they approached so near the dike road where I was parked that I thought they might actually come to the car.

These birds are not shy, and they are not small — 4 feet tall, with a 7-foot wingspread. To see one up close still seems a little like a miracle, but at Crex it can be commonplace.