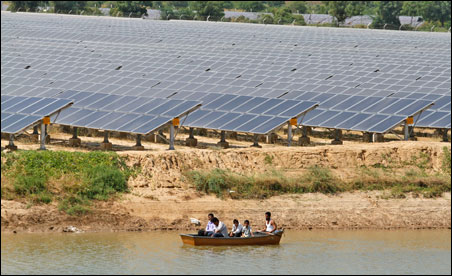 News of renewable energy has been trending negative for a long while, but a bright exception surfaced recently — and if it earned even a small headline in Minnesota media, I missed it.

The story originated with Bloomberg, and here’s how it showed up in the Los Angeles Times:

Renewable energy is surpassing fossil fuels for the first time in new power-plant investments, shaking off setbacks from the financial crisis and an impasse at the United Nations global warming talks.

“The progress of renewables has been nothing short of remarkable,” United Nations Environment Program Executive Secretary Achim Steiner said in an interview. “You have record investment in the midst of an economic and financial crisis.”

Those are global numbers, and the fine print makes them even more compelling.

In making their computations, the analysts at Bloomberg NEF specifically excluded investments made to replace existing plants, and they also excluded large hydroelectric projects. (I could not determine how they counted new nuclear plants, but there hasn’t been much action in that sector anyway.) So you could say this is a clear, straight-up comparison between:

Listen to the professional gamblers
I claim no special expertise on these matters, but I have engaged in extensive reading and interviewing of people more knowledgeable than myself over the last 15 years or so, and when it comes to gauging energy trends I’ve learned to give a lot of weight to the actions of investors.

They’re professional gamblers, after all, and if their judgments are wrong, they either lose their own money or have to answer to somebody else — shareholders, ratepayers, taxpayers — whose money they lost.

So I think it’s worth an underscore that the Bloomberg report isn’t about the opining of economists or academics or consultants. It’s about where the people who are laying down big bets have chosen to place their chips, after weighing all the risks.

And it’s where they placed bets in 2010 — not a year in which faint-hearted players would have picked renewables over business as usual.

As the year began, the Copenhagen climate talks had fallen apart and there was no realistic prospect that Congress would adopt strong carbon limits. Financial crises worldwide were discouraging investment and lowering electric consumption and foreshadowing reduced government support for renewables via tax credits, production subsidies, renewable portfolio standards and other mechanisms.

Those trends haven’t changed, and in some ways they are worsening. Hopes for the climate talks under way in Durban could hardly be lower, and as for money matters, the full Bloomberg story, citing a mid-November forecast from Ernst & Young, predicts that “financial austerity measures in 10 nations, including the U.S., Japan, Spain and Germany, will cut spending on climate-protection measures by $45 billion in the five years through 2015.”

An upward trend through 2030
Yet even in these tough times, Bloomberg NEF says renewables will continue to expand. In a separate report issued Nov. 16, it foresees annual outlays for new plants reaching $395 billion by 2020 and $460 billion by 2030.

At that rate, worldwide generation from renewable sources (this time including large hydro) would rise from 12.6 percent of total energy production last year to just 15.7 percent over the next 20.

That’s not so much, and as the political economist Elliott Morss observed over at TheStreet.com, we might be better off if less were being spent on installing today’s turbines and more on inventing tomorrow’s technologies:

During past energy transitions, much money was made and lost as various actors tried to guess which new technologies would succeed … . According to BNEF, only 5% of renewable investments are going into technology development (government and corporate R&D, and venture capital). Most is going into existing technologies for projects. This makes no sense. In a couple of years, outdated solar panels and windmills will litter the earth.

On balance, though, Bloomberg’s predictions are heartening. And perhaps they should also be considered minimum forecasts — a measure of cautious investment occurring in the absence of strong, sustained stimulus from markets, public policy or technological advance.

A change in any of those factors presumably could pick up the pace.

Despite uncertainties, investors are betting on renewables