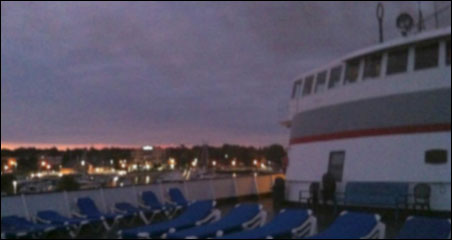 MinnPost photo by Ron Meador
‘The Badger’ carries up to 180 cars and more than 600 people from Manitowoc, Wis., to Luddington, Mich.

There may be people who enjoy spending part of a vacation getting through Chicago by car, but I have yet to meet one.

No matter the time of day, the time of year or the state of Illinois’ road-repair budget, Chicagoland freeways are an agony — speeders and road-ragers, gridlock and tailgaters, detours and craters and huge, filthy trucks. Had Dante been a modern midwesterner, his Inferno might have included a tenth circle of hell, laid out along the Eisenhower, the Kennedy, the Stevenson, the Bishop Ford and the unholy Ryan.

But as quite a few Minnesotans have found over the years, there is a better way — in fact, a way better way. Instead of driving around Lake Michigan, you and your car can sail across on the S.S. Badger.

So it was good to hear last week that researchers from Minnesota and Wisconsin will try to find a way to repower the elderly, coal-burning Badger with natural gas, and thereby keep it from going aground on modern pollution rules.

A midnight cruise across Michigan
Last July, en route to western New York, Sallie and I boarded the Badger in Manitowoc, Wis. It was shortly before midnight, warm and breezy under clear skies.

Though it can carry up to 180 cars and more than 600 people, the Badger gets under way so smoothly we weren’t sure we were moving until we saw the lights of Manitowoc falling away.

We climbed to the open upper deck and, grinning like teenagers, pulled sleeping bags out of our packs and stretched out on lounge chairs for a short night’s sleep under the stars.

The Badger took us from zero to Woodstock in a heartbeat. Four hours later, at dawn, we stepped off her gangway and into our waiting car in Ludington, Mich. — rested, refreshed and ready for breakfast.

In all, it took us less than 24 hours to get from our home just east of Stillwater to our destination near Buffalo. Had we driven the whole way, it would have been about 900 miles and 15 hours behind the wheel — too many of them circling Chicago.

A dirty little problem
But there is a problem with the Badger that has finally caught the attention of the U.S. Environmental Protection Agency. And  it’s not the one you might assume from the huge brown plume that trails behind her smokestacks. 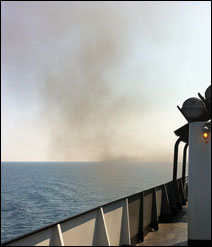 MinnPost/Ron Meador
The Badger belches pollutants, but also dumps coal sludge overboard at the rate of nearly one ton per trip.

The issue here isn’t coal smoke but coal ash, which the Badger makes into a slurry and dumps overboard at the rate of nearly one ton per trip, 3.8 tons per day, more than 500 tons per season.

In 2008, under court order to enforce pollution standards in the Great Lakes, EPA gave the Badger’s operators till the end of next year — five operating seasons — to quit dumping ash or quit operating altogether. Sad to say, the company’s response has fallen well short of cooperative.

First it challenged the EPA’s authority to regulate the ash-dumping, preparing tests that purported to show the coal ash wasn’t harmful in terms of mercury or other toxics. EPA disagreed.

Next, it launched a “Save the S.S. Badger” publicity campaign, blanketing the boat and businesses all over Manitowoc and Ludington with leaflets that were long on emotional appeals and short on specifics. The overall impression left by the materials I saw last summer was that the EPA had suddenly noticed the Badger, after 50-some years of problem-free operation, and ordered it to make immediate, impossible repairs.

An outrageous move in Congress
Most outrageous, a few months ago the Badger‘s operators got a couple of congressmen to introduce a special bill permitting the boat to be declared a national historic landmark and, therefore, potentially exempt from EPA regulation.

In fact, the Badger does have some historic status as the last coal-fired passenger steamship operating in the United States. It is already a registered state landmark in both Michigan and Wisconsin.

But should that entitle the boat to permanent exemption from water-pollution rules? Nobody but the operators and their allies thinks so.

In my own view, it might justify some lenience on EPA’s part in giving the Badger a little more time  to come into compliance — but only if the company was working in good faith to find a solution, rather than repeatedly trying to sail around the rules.

I’ve grown fond of this funky old boat, with its battered demeanor and industrial aromas and fancifully marketed “staterooms.” Judging by the license plates on vehicles streaming down her ramps every time we ride her, so have lots of other Minnesotans.

So I’m heartened to hear that researchers at the Great Lakes Maritime Research Institute think it may be feasible to repower the boat with natural gas — a conversion that fleets of car ferries in Europe have been making for some time now.

In addition to the benefits the old boat delivers in terms of enhanced driver sanity, it’s an important contributor to the regional tourism economies around Manitowoc and Ludington. There may even be some net environmental benefit to taking all those cars off the roadways for a while. But if the Badger can’t or won’t follow the rules, it deserves to follow the lake’s other ferries into history.

That will still leave an option for ferry loyalists — the Lake Express, a higher-priced boat that makes the crossing from Milwaukee to Muskegon with three round trips a day to the Badger’s two, and  in just two and a half hours to the Badger’s four.

Speed isn’t really the point, but it’s supposed to be a pretty nice boat. No doubt it beats driving around Chicago.