A year ago, my journal shows, I snowshoed into the woods behind the house one afternoon, stepped out of a binding unawares, and sank up to — well, to the top of my inseam.

This year the snowshoes haven’t left their hooks. Our cross-country skis are still wearing last winter’s wax.  I’ve run the snowthrower exactly once, and that was optional, really — a shakedown run for the big dumps that still haven’t come.

Our nearly non-winter isn’t a completely happy thing, for I like a deep, cold month or two. But it has offered one unexpected benefit: thanks to mild weather and some new weapons and tactics I picked up in a training last fall, I’ve been able to keep fighting my war on buckthorn without a cease-fire.

And I’m finally optimistic about pushing this invader off my portion of Skunk Hollow.

Conventional wisdom’s not so wise

Military metaphor isn’t my style, but with buckthorn it has become a habit. The guys out here all seem to talk that way, pehaps because experience has taught them that buckthorn eradication is the forest landowner’s equivalent of a never-ending War on Terror.

That might change if more listened to Cheryl Culbreth, a landscape-restoration professional whose message is:

Getting rid of buckthorn, permanently, is not only possible but may be far less work than many of us believe.

I heard Culbreth give a workshop on a sunny morning last fall at Camp St. Croix. The camp was having a Halloween festival and hundreds of parents and children, presumably untroubled by buckthorn in their personal lives, were gaily playing ring-toss or having their faces painted.

Away from the festivities, in a cramped, unheated shed, about 20 of us weathered warriors were listening hard as Culbreth explained that nearly everything we thought we knew about battling buckthorn was, well, not necessarily so.

From the questions and comments I heard, our collected knowledge and/or folk wisdom up to that point could be summarized thus:

The best way by far to clear buckthorn is to pull it up by the roots, because if  you just cut it down, it will regenerate – sending up many stems, hydra-like, from each stump you leave.

The next-best way is to spray the foliage, from early summer through fall, with a heavy-duty herbicide like glyphosate (introduced as Roundup) or triclopyr (Garlon, Crossbow, etc.).  But don’t start too early; when the trees are leafing out, the upward flow of sap will flush the herbicide away. And don’t spray too little; if you don’t kill the root, get ready for the hydra.

If uprooting is too much work, and broadcasting plant poison is objectionable, there is always try the cut-stump method: cut the trees to leave several inches of stump, and immediately soak the cut and bark with a spray of triclopyr, diesel fuel (to slow evaporation) and a bright dye (to keep you from tripping over it later). If the stump is large, “frill” the bark first with a hatchet or machete to get more poison into the wood.

All of these methods are seasonal, and the cut-stump/triclopyr option has the narrowest window. To limit harm to other species, it’s best to cut and spray after everything but buckthorn has gone dormant, but before the buckthorn drops its leaves. This leaves you maybe a month, give or take, and less if you deduct for Thanksgiving and deer season.

A series of defeats 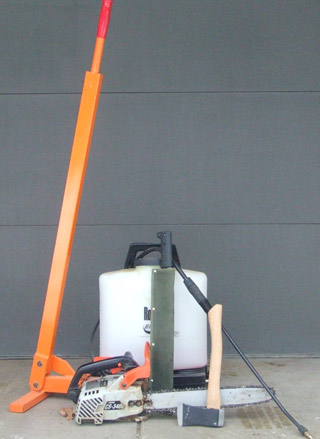 Three years ago, having weighed the options, I decided to try them all. I invested in heavy weaponry including a backpack herbicide sprayer, a “weed wrench” supposedly capable of uprooting trees to a 2-inch diamater, a gallon of triclopyr and a couple of diesel, some red food coloring and a nice new machete with scabbard.

And then I lugged all this stuff into battle, only to meet one harsh reality after another:

After three years of experimentation and intermittent toil, for the toil was no fun at all, I’d cleared only a handful of small patches and had disappointing re-growth results besides.

Light weapons and a long timeline

Culbreth’s strategy could be considered the guerrilla alternative to all the other battle plans — a fast-moving cut-stump approach that makes focused use of the most benign buckthorn-killer available and can be used 10 months of the year. Here’s how it works:

One application  won’t do it all, but after just two or three years of intensive treatment you can expect to shift to maintenance mode, yanking up new plants that sprout not from the old stumps but from seed, and pull out readily (buckthorn seeds stay viable in the soil for up to seven years, and of course the birds are always bringing new ones).

Culbreth doesn’t criticize others’ methods nor trumpet her own too loudly, although she cautions that the soil disturbance from uprooting essentially invites new invaders to move in. She’d rather see people removing buckthorn by any and all means rather than surrender to its spread, and she seems kind of modest besides. So I’ll say it in her behalf — the method she’s teaching is brilliant.

It takes less time and costs less money. It uses less herbicide and virtually eliminates the risk to nontarget plants.  You aren’t restricted to the warm-weather months, when you may have pleasanter things to do. Above all, it’s much lighter work, so a lot more land gets treated, and the frustration factor goes way, way down.

You leave the heavy gear behind and go for a walk in the woods, with lopping shears in hand and a little bottle in your pocket, and you can cut and treat all but the biggest trees just snip-snip-snip, daub-daub-daub. Come back later with a chainsaw for the rest.

In place of red-tipped trippers and the chore of clearing them next spring, I have little spots of blue in the snow. Next year there will be fewer of these, and fewer still the year after that. At which point it may be time to revisit Culbreth’s materials on the next big invasive threat — garlic mustard.

But one war at a time.

Culbreth offers more information about this method, about buckthorn eradication generally, and about upcoming workshops on her website:  www.landscape-restoration.com. She also  sells supplies including a “Buckthorn Blaster” applicator developed by a former business partner, Mary Wright. You could probably make your own gear but hers is reasonably priced and works like a charm.