A lovely and, I hope,  important little book arrived recently, its not quite 50 half-size pages devoted to thoughts “On the Future of Food.”

Because it carries the byline of HRH The Prince of Wales, and the savvy title “The Prince’s Speech,” it may get the attention it deserves. That would be good.

The book is essentially the text of remarks Prince Charles delivered last May as keynoter for a conference at Georgetown University in Washington.

Its heart is the portrayal of a global food system in which natural resources like soil and water are being depleted; inputs like chemical fertilizer and fuel are rising in price; hunger, malnutrition and obesity are worsening; dominant farming methods are increasingly vulnerable to catastrophic failures – and 40 percent of food purchased in the developed world is thrown away.

It’s unlikely that any of Charles’s material came as a surprise to the Georgetown audience, nor may there be much breaking news in it for readers already attuned to journalism about industrial agriculture and its many problems.

What is significant about his remarks, I think, is the concise and measured way in which he demonstrates that our mainstream methods of growing and distributing food are not only environmentally unsound and ethically offensive, not merely unsustainable and unwholesome, but quite simply dangerous.

Offering “a quick pen sketch of just some of the evidence this is so,” he says:

Yield increases for staple food crops are declining. They have dropped from three per cent in the 1960’s to one per cent today – and that is really worrying because, for the first time, that rate is less than the rate of population growth. And all of this, of course, has to be set against the ravages caused by climate change. Already yields are suffering in Africa and India where crops are failing to cope with ever-increasing temperatures and fluctuating rainfall. We all remember the failure of last year’s wheat harvest in Russia and droughts in China. They have caused the cost of food to rocket and, with it, inflation around the world, stoking social discontent in many countries, notably in the Middle East. It is a situation I fear will only become more volatile as we suffer yet more natural disasters…

Set against these threats to yields is the ever-growing demand for food. The United Nations Food and Agriculture Organisation estimates that the demand will rise by seventy per cent between now and 2050. The curve is quite astonishing. The world somehow has to find the means of feeding a staggering 219,000 new mouths every day. That’s about 450 since I started talking! What is more, with incomes rising in places like China and India, there will also be more people wealthy enough to consume more, so the demand for meat and dairy products may well increase yet further. And all that extra livestock will compete for feed more and more with an energy sector that has massively expanded its demand for biofuels. …

Most forms of industrialized agriculture now have an umbilical dependency on oil, natural gas and other non-renewable resources … And when you consider that in the past decade the cost of artificial nitrogen fertilizers has gone up fourfold and the cost of potash three times, you start to see how uncomfortable the future could become if we do not wean ourselves off our dependency. And that’s not even counting the impact of higher fuel prices on the other costs of production – transport and processing – all of which are passed on to the consumer. 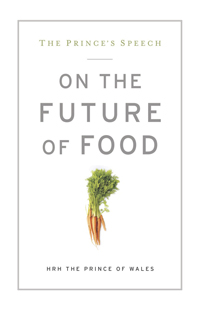 Of course, other costs of production are not passed on to the consumer. Instead, they are “externalized” to other people in faraway places or future times – the cost of depleting groundwater aquifers for wasteful irrigation being one example, the cost of soil erosion and nutrient loss being a second, the creation of aquatic “dead zones” a third, and the list goes on and on.

But the prince does not. His command of the essential information is evident and so is his passion for the subject. But he is also, in literal fact, an elder statesman who must be mindful of the impact of his words and likely reaction to them, especially but not only in Britain’s agricultural sector.

The case for smallholder farming

Nor does he trumpet at length his well-known (and oft-mocked) personal pursuit of organic agriculture at Highgrove Home Farm, the charitable enteprise he established at his country estate. Rather, he makes a clear case for the return of small-scale farming on the basis of real research, including a 2008 assessment by the United Nations:

The report drew on evidence from more than 400 scientists worldwide and concluded that small-scale, family-based farming systems, adopting so-called agro-ecological approaches, were among the most productive systems in developing countries. This was a major study and a very explicit statement. And yet, for some strange reason, the conclusions of this exhaustive report seem to have vanished without trace. This is the heart of the problem, it seems to me – why it is that an industrialized system, deeply dependent on fossil fuels and chemical treatments, is promoted as viable, while a much less damaging one is rubbished and condemned as unfit for purpose?

In the end, the importance of a book like this depends less upon who wrote it and more on who reads it. The folks at Rodale press, who kindly provided me a copy, seem to think the combination of its small size, compelling prose and royal provenance may spread these ideas beyond the usual readership for such debate, and I hope they are right.

In any case they deserve a nod for the perhaps dubious business practice of paying to print a high-quality book whose main text is already available online for free, from a speech that can still be watched on YouTube, and pricing it at just $6.99 on paper, less as an e-book.

I say “main text” because the printed version brackets the prince’s speech with an elegant introductory essay by Wendell Berry and a rousing afterword by Will (“Growing Power”) Allen and Eric (“Fast Food Nation”) Schlosser.

The book has been out since Feb. 14 but hasn’t yet attracted a great deal of press (and none in this area, as far as I can tell) although it did get a “book of the week” mention in the Philadelphia Inquirer.

So tell your friends. And if some of those friends have had their fill on this subject, maybe share a bit of what Wendell Berry had to say:

So far as I know, only one eminent person has had both the clarity to see and the courage to speak candidly about the obvious failures and dangers of industrial agriculture. That person is Prince Charles. …

[The speech] was nothing like the speeches on public issues that we are getting accustomed to in the United States. It was not a volley of angry slogans and loose assertions. On the contrary, Prince Charles’s terms were clearly defined; his argument was made carefully and in detail; his speech was quietly voiced, and the more powerful for that. He did not speak as a blinkered partisan of a “side,” but rather, as a human to other humans, of concerns urgently important to us all.