It was March 15, I think, that I heard the year’s first sandhill cranes passing overhead. They were a month early and startled me so that I forgot to record the date.

Amid so many signals of our sudden spring, the calling of these first, invisible cranes was the most potent by far, and it was only a matter of time till I followed the noise north to Crex Meadows.

If you have ever heard the call of a sandhill crane, you know it cannot really be described. I could tell you that a sandhill sounds like the offspring of a goose and a synthesizer, or like a loon that had decided to lose its fish breath by gargling, and this might jog your memory.

But if you’ve never heard the cranes, trust me, it’s worth your while to click here for a sample.

Birds of the dinosaur age

Cranes are the oldest birds still walking the earth. The distinctive ways they walk, and dance, and fly are all the products of anatomical oddities dating back as long as 60 million years, when they may have been sharing territory with dinosaurs of the Eocene. So is their vocalization.

At birth a sandhill’s windpipe is about as long as its neck, following an efficient straight line from throat to lungs. At adulthood, when it stands about four feet tall, a typical sandhill has 23 inches of neck and 48 inches of windpipe, according to Steve Groom’s book, “The Cry of the Sandhill Crane:

Where are those extra 25 inches? They’re located in the chest area, lying in convoluted loops along the sternum under the wing muscles. While the calls of cranes are often described as “bugling” or “trumpeting,” the sandhill’s windpipe has more in common with the French horn… .

Except not even a French horn virtuoso can make himself heard two miles away, as the sandhills can. Here’s how Aldo Leopold described their performance in “A Sand County Almanac”:

Out of some far recess of the sky a tinkling of little bells falls soft upon the listening land. Then again silence. Now comes a baying of some sweet-throated hound, soon the clamor of a responding back. Then a far clear blast of hunting horns, out of the sky into the fog.

High horns, low horns, silence, and finally a pandemonium of trumpets, rattles, croaks, and cries that almost shakes the bog with its nearness, but without yet disclosing whence it comes. At last a glint of sun reveals the approach of a great echelon of birds. On motionless wing they emerge from the lifting mists, sweep a final arc of sky, and settle in clangorous descending spirals to their feeding grounds. A new day has begun on the crane marsh.

There are crane marshes scattered across Wisconsin, but I know of no better place to see them— early in the season or late, along the road or overhead, up close and in huge numbers— than Crex Meadows, a 30,000-acre wildlife area just outside Grantsburg, less than two hours by car from the Twin Cities.

Usually it’s mid-April when the sandhills start returning from their wintering grounds in Florida. On Sunday, Sallie and I saw perhaps 20 scattered around Crex acreage, setting up the nests they’ll occupy through the summer and early autumn. Some years the population reaches 7,000 or 8,000.

By midsummer you can drive along the dike roads that criss-cross Crex’s marshes, remnants of a time the land was used to produce industrial quantities of sedge for carpet-making, and see the cranes in crowds too large to count.

And when you see them overhead, filling the sky with their prehistoric profiles, weird wing-beats and pulsating cries, it isn’t hard to imagine a few pterodactyls trailing behind. 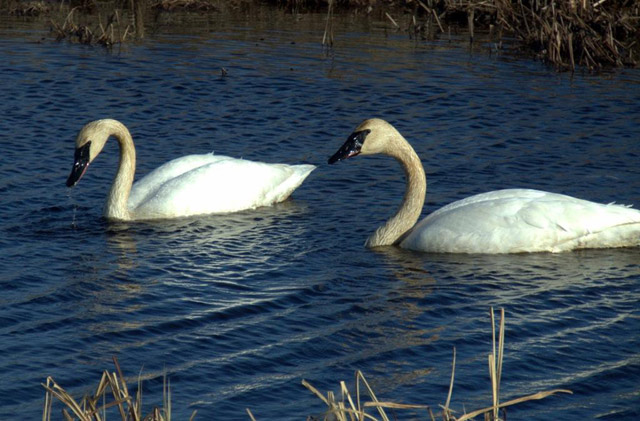 Crex is a favored destination not only for the planet’s oldest birds but also for its largest waterfowl species, the trumpeter swan.

We saw at least a half-dozen pairs on Sunday – and maybe three more, but they were too far away to distinguish with certainty from tundra swans, which are also passing through Crex right now on their return trip to the arctic.

Indeed, the birding report for last week, drawing on sightings by Crex staff and visitors, listed well over 50 species of the 270 or so that are regulars here.

Steve Hoffman, the wildlife biologist at Crex, told me that the mild winter and early warm-up haven’t changed the arrival schedules dramatically this year, although the cranes and trumpeters are a little early.

Trumpeters, he explained, really only go as far south as necessary to find reliably open water, and this year some are returning from spots in the neighborhood, on the Wolf, Clam and St. Croix rivers.

The species showing the largest surge of unseasonably early arrivals, he said, is humans. I suppose that includes us, but as usual we were impressed by how often we had the place to ourselves for as far as we could see.

Sallie’s a much more proficient birder than I, especially with waterfowl, and her list for Sunday included northern shovelers, buffleheads, redheads, common goldeneyes and mergansers, northern flickers, a northern harrier and an eastern bluebird. Not to mention the more common robins, bluejays, crows, sparrows, mallards, Canada geese, gulls and a single, immature bald eagle.

That was no duck

Early in the day, while she was tracking ducks along one side of the road, I spotted a black, glossy bird across a flowage to the other side, craning its neck into the reeds. The binoculars revealed it to be not a bird at all but an enormous turtle of a type we’d never seen – like a snapper in size, but all wrong for color and shape.

Ten minutes later we came upon an identical turtle crossing the road. We took a closer look, and a couple of pictures, and moved on, scratching our heads. Hadn’t thought to bring a field guide to reptiles.

Driving home, we found our mystery solved on the front page of Crex’s winter newsletter: It was a Blanding’s turtle, a species scarce enough to be on the threatened or endangered lists throughout most of its former range — but not here, where the population is robust and sightings are common. 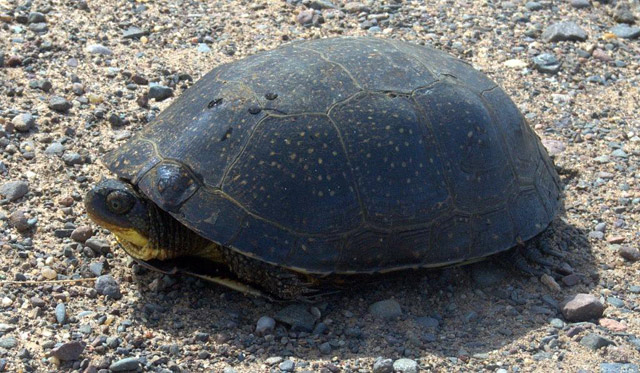 MinnPost photo by Ron MeadorBlanding’s turtle, a species facing extinction in many places, is a common sight at Crex Meadows.

Crex Meadows, listed by the American Bird Conservancy as habitat of global importance, is at the southern part of Wisconsin’s pine barrens. It’s a flat place of sandy soils and shallow waters, a large fragment of brush prairie whose natural cover is sedges, grasses, willow, scrub oak and other brush that doesn’t grow tall enough to interrupt long views to 360-degree horizon.

It’s a bad habit to compare one beautiful natural place to another but there were moments on Sunday when its rolling, golden contours – and frequent silence — reminded me of the coastal plain in Arctic National Wildlife Refuge.

The weather is bringing pale splashes of yellow, green and white as the osiers, pussy willows, dogwoods and others form their buds and first foliage.

This timing is actually a concern to wildlife managers, Hoffman said, because the early growth will be vulnerable if a hard freeze or heavy snow comes along. That’s not unlikely, and it could significantly reduce the food supply available to Crex’s birds and other wildlife.

For the moment, though, it’s a gorgeous time to visit a special place, and Crex’s excellent visitor center will be open on weekends starting Saturday.

All the visitor information you could want is here. For the volunteer-minded, Hoffman points out that the annual crane count and litter pickup is on the calendar for April 14.