The bear came by the other day to flatten the backyard bird-feeder post, again, and to yank down a pair of suet cages we’d suspended seven or eight feet in the air but not quite high enough.

He knocked open a galvanized trashcan of birdseed and left it half-empty – or half-full, depending on your perspective – but gave us a break and ignored the garbage cart out front.

All of this happened within a few yards of the house, but we didn’t hear a thing. One cat was an eyewitness, we think, because she stayed on high alert and away from the windows for a few days.

Sallie and I, on the other hand, were grinning like kids with a new puppy as we surveyed the mess.

We picked this house in Skunk Hollow for many reasons, but the No. 1 factor on the list we gave our realtor was proximity to wildlife. It was time to trade longer drives to work for shorter drives to the trailhead.

We had no idea we’d see so much without driving anywhere at all.

The resilience of wild creatures in the face of habitat loss and other pressures is well known, and the resurgence of some species – with official help and without – may be the most encouraging environmental narrative of my lifetime. None of this makes their sudden materialization less amazing.

On this woodland fragment surrounded by farms and subdivisions, 15 minutes from downtown Hudson or Stillwater and a half-hour from downtown St. Paul, the regulars include barred owls, red-tailed hawks, wild turkeys, pileated woodpeckers and a couple of dozen other birds; coyotes, deer in groups up to a dozen, a probable fisher and such charismatic mini-fauna as star-nosed moles, Cope’s gray treefrogs and Jefferson salamanders.

Not to mention our feeder-raiding bear, who leaves traces at least a couple of times each year.

Now right there I’ve taken this story beyond what we actually know, for we have no way of telling whether these visits involve one bear or several. No basis for calling him “him,” for that matter.

But the stories Sallie and I construct around these encounters are not meant as scientific observation. We aren’t making a record of sightings or specimens. We think of these creatures as something more like neighbors – not family, not friends, certainly not pets – and we learn about their habits and habitats in an effort to hold up our end of good-neighbor relationships.

The bear (or bears) can have just one shot at the feeders each spring, one shot at the garbage cart each fall. Alerted to his (or her) return, we then put temptation out of reach. A fed bear is a dead bear, and we want to discourage familiarity that would sooner or later prove fatal.

How can I be sure these are even bear visits at all? Good question, and one I asked myself after the first raids on the birdseed can and garbage cart – raccoons seemed much more likely.

Then came the evening when I stood at the kitchen sink, doing dishes, and caught the movement as he came out of the twilight to cross the grass just beyond my window, climbed the steps to the deck, passing the place where the feeder used to be, pausing to sniff the furniture ….

I got off one shot with a cellphone camera before he was out of sight, not hurrying, seemingly oblivious to all the flash and flutter behind the glass. It’s a murky image, not much more than a silhouette, but the shape alone says black bear for sure, maybe three-quarters of full adult size. And now he can reach higher than me.

Turkeys at the window 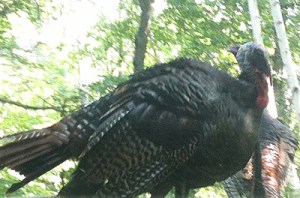 MinnPost photo by Ron MeadorA turkey at the window

Turkeys are plentiful in these woods; we’ve seen them in roosts of 20 or more. And for a couple of weeks in late summer the toms gather at my study’s ground-floor windows to spread their feathers and strut and peck at their reflections.

Their eyesight, so sharp outdoors, doesn’t seem to penetrate the glass and I can stand within two feet, measuring beak to beak, without spooking them from this mating display, a thrilling thing to watch.

But then the force of their rapping reaches an alarming level and I go outside to wave them away. A half-hour later we’re at it again. This story goes on day after day until a shift of season brings it to a close.

Last New Year’s Day, as I split and stacked firewood in the warm afternoon, a hen turkey walked out of the trees and stood in the driveway, watching. 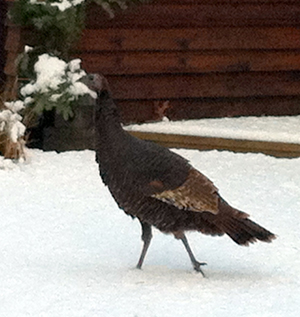 In two quick steps I could have had her by the neck and fulfilled my dream on dining on one of these birds, braised for hours in red wine and shallots, and without even having to fetch the shotgun or pick out the pellets afterward.

She has tried to humor me when I talk of putting a turkey from these woods on our dinner table but she can’t quite get there, and so the turkeys have won out, so far, along with the rabbits and the fat, sleek fox squirrels.

To our inexpert eyes this particular hen looked sickly, so Sallie got a big scoop of birdseed and poured it on the ground. The bird was feeding before the pour was finished. She ate her fill, hung with us awhile longer, then walked off down the driveway.

She hasn’t been back and, in the story we tell ourselves about this encounter, that means she wasn’t used to being fed by people. Hard times and hunger bested her fear of humans just long enough to come after this handout. Might be she’s still around somewhere because of it.

A buck on three legs

The last story I’ll tell here is about a crippled deer, and like the others it has no beginning or end – just one recurring scene from the middle, where a big buck stands browsing in the snow, again and again, winter after winter.

He’s on a trail, one of two the deer use consistently as they cross our place, this one behind the house and about 80 yards into the trees. After leaving our land the trail passes practically beneath a couple of deer stands. Many of my neighbors hunt deer, and one hunts right here.

Against the snow I can see, without binoculars, even at this distance, that the buck has three good legs and a right hind leg that ends about 18 inches above ground. With binocs I can make out a normal-looking flank and a dark, short twist  of foreleg ending in a misshapen hoof that faces forward and up.

I never see him alone. Other deer are drifting around and past him and eventually he trails after them, awkwardly, haltingly, up over the ridge and out of sight. Deep snow doesn’t seem to trouble him, but when it’s packed and icy he may struggle for traction going uphill.

Three times now I’ve seen them all startle at something and high-tail it over the ridge — and this buck is staying nearly even with the rest on three good legs and a claw.

What’s his story? I asked a hunting neighbor who has made a study of deer and he said it’s anybody’s guess. Maybe an injury, maybe a birth defect.

And now, after four winters, I’ve sort of stopped wondering.

I don’t need to know the details of his story to know its meaning, and that meaning is endure.

Letter from Skunk Hollow: Bear on the deck and turkeys at the window