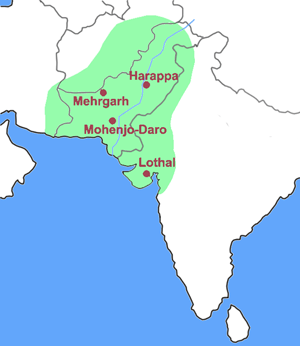 Fox News serves up the occasional surprise in its generally unbalanced coverage of climate change, and I’m not talking about its recent giggle about flatulent dinosaurs as an engine of ancient global warming.

Only yesterday, Fox carried a provocative, serious summary of new research tracing collapse of the Indus civilization to a climate shift that occurred about 4,000 years ago.

Changes in the monsoon cycle are now thought to have been the main factor driving abandonment of cities that held perhaps one-tenth of the world’s population, and erasure of a civilization that now ranks among antiquity’s most advanced and least understood.

The monsoon cycle’s role is worth keeping in mind as we think about the fate of the Indus, because similar changes are among the likeliest results of contemporary global warming. Also, they’re high on the list of risks posed by “geoengineering” responses that would reverse today’s greenhouse effects by artificially cooling the planet under a blanket of sun-reflecting aerosols.

Vanishing of the Indus

The cities of the Indus culture, also known as the Harappan civilization, began to take shape some 5,000 years ago and flourished for the better part of two millenia. And then, rather suddenly, the cities emptied and the culture essentially disappeared for reasons that have remained mysterious.

Civil war and foreign invasion have been the leading theories – with unspecified environmental factors trailing behind – but evidence was scant.

Indeed, as one of the lead investigators told Fox, even the existence of the Indus cities was essentially forgotten until a series of archeological discoveries early in the last century.

“Antiquity knew about Egypt and Mesopotamia, but the Indus civilization, which was bigger than these two, was completely forgotten until the 1920s,” said researcher Liviu Giosan, a geologist at Woods Hole Oceanographic Institution in Massachusetts. “There are still many things we don’t know about them.”

The new findings are based on a multidisciplinary team’s analysis of topographical, geological and archeological data, along with photography from the space shuttle Endeavor, pulled together with the aid of satellite mapping and then laid alongside information from  the climate record.

A New York Times account of the new findings, slightly condensed, summarizes the civilization’s rise and fall this way:

Wild, untamed rivers once slashed through the heart of the Indus plains. They were so unpredictable and dangerous that no city could take root on their banks. As the centuries passed, however, the monsoons became less frequent and the floods less intense, creating stable conditions for agriculture and settlement.

Sprawling across what is now Pakistan, northwestern India and eastern Afghanistan, the Indus civilization encompassed more than 625,000 square miles, rivaling ancient Egypt and Mesopotamia in its accomplishments.

Unlike the Egyptians and Mesopotamians, who used irrigation systems to support crops, the Harappans relied on a gentle, dependable cycle of monsoons that fed local rivers and keyed seasonal floods.

As time passed, the monsoons continued to weaken until the rivers no longer flooded, and the crops failed. People began abandoning the cities and moved eastward toward the Ganges basin, where rains were more dependable (though not dependable enough to sustain urban metropolises). The civilization dispersed, fracturing into small villages and towns.

Although far less is known even today about the Indus culture than the civilizations of ancient Egypt and Mesopotamia, it appears at least equally developed. In addition to extensive agriculture, the Indus engaged in seagoing trade, written (and still undeciphered) language — and, Giosan told Fox, they built

cities ordered into grids, with exquisite plumbing, which was not encountered again until the Romans. They seem to have been a more democratic society than Mesopotamia and Egypt — no large structures were built for important personalitiess like kings or pharaohs.

Giosan also explained that the Indus cities flourished during a brief but golden moment in the Earth’s climate history and the region’s monsoon pattern:

The insolation — the solar energy received by the Earth from the sun — varies in cycles, which can impact monsoons. In the last 10,000 years, the Northern Hemisphere had the highest insolation from 7,000 to 5,000 years ago, and since then insolation there decreased.

All climate on Earth is driven by the sun, and so the monsoons were affected by the lower insolation, decreasing in force. This meant less rain got into continental regions affected by monsoons over time.

And when that happened, the Indus became climate refugees, abandoning their great settlements and streaming toward the Ganges.

Any lessons for today? Well, Giosan puts it this way:

If we take the devastating floods that caused the largest humanitarian disaster in Pakistan’s history [two years ago] as a sign of increased monsoon activity, than this doesn’t bode well for the region. The region has the largest irrigation scheme in the world, and all those dams and channels would become obsolete in the face of the large floods an increased monsoon would bring.

And in his comments to the Times, Giosan drew a second parallel, this one for today’s most advanced economies. Like the Indus, we’ve built a complex system dependent on a single resource that can come and go — in our case, oil.

(The research was published in the Proceedings of the National Academy of Sciences, which requires a subscription. Other good coverage appeared in the Los Angeles Times and Discovery News.)