Sometimes I look at an image like the one above and think that NOAA could also stand for the National Orbital Artwork Agency.

This dazzling and disturbing example, which I found in the Christian Science Monitor, shows the nighttime lights of our region in four colors. The blue lights were recorded by satellites back in 1992, the green lights had appeared by 2000, and the red by 2010; white is for light detected in all three years.

Often pictures like this are used to illustrate the shrinking visibility of night sky thanks to the spread of ground light across the landscape.

This one, however, was chosen by the Monitor to illustrate a different form of pollution: the massively wasteful flaring of natural gas in North Dakota’s booming oil patch. As Mark Clayton writes:

The United States is flaring so much natural gas into the atmosphere — burning it as oil-field waste rather than extracting energy from it in power plants — that it now leads the world in the growth rate at which it is trashing that energy source.

Evidence of the trend can be seen flickering in the night across western North Dakota, where new oil drilling in the Bakken shale formation there has helped propel a surge in U.S. flaring since 2007. As is often the case, many companies find it cheaper to burn off gas that emerges in new oil fields, rather than build pipelines and facilities to collect it.

But that common practice has created a big problem globally. About 5 trillion cubic feet of natural gas were flared or vented without burning worldwide last year.  That huge amount of wasted energy is roughly equal to a quarter of all natural gas consumed in the U.S. annually, the World Bank reports. Flaring also dumped 360 million tons of greenhouse gases into the atmosphere over the same period, equal to the exhaust of  70 million cars.

Gas flaring worldwide has been targeted as a serious problem by the World Bank through a public-private partnership called Global Gas Flaring Reduction. A chart of estimated flaring volumes from 2007 to 2011 shows mixed results for its efforts.

Russia, the largest contributor among the world’s top 20, has made dramatic reductions in its flaring practices — at least until a slight rebound last year. So have Nigeria, Mexico, Qatar and Uzbekistan. Overall, flaring declined by about 9 percent during the period.

But the U.S. contribution grew by more than 300 percent over those five years, primarily because of practices in North Dakota. We climbed from a 14th-place tie with Venezuela to sole possession of the No. 5 spot, after Russia, Nigeria, Iran and Iraq.

I think such squandering of a premium, finite fuel is insane, and at least some folks in the business world think it’s bad idea at best. Last March, the Monitor story notes, a group of investors wrote an open letter to the oil companies calling for action to curb such waste while also calibrating it in dollar terms:

Even at today’s depressed wellhead price of under $3.00 per thousand cubic feet, the 100 million cubic feet of natural gas that were flared each day in North Dakota last year represent approximately $110 million in lost revenue.

One glimmer of good news, I suppose, in all of these statistics:

The natural gas that goes up in smoke through flaring contributes less to global warming than simply venting unburnt gas to the atmosphere, since methane is thought to be 25 times better than carbon dioxide at holding solar heat against the planet.

But they do plenty of venting in the oil patch, too.

One vision of drought at midcentury

Speaking of disturbing views of Earth, here’s another — from Wonkblog at the Washington Post, where it accompanied a Brad Plumer post on “How droughts will reshape the United States.” 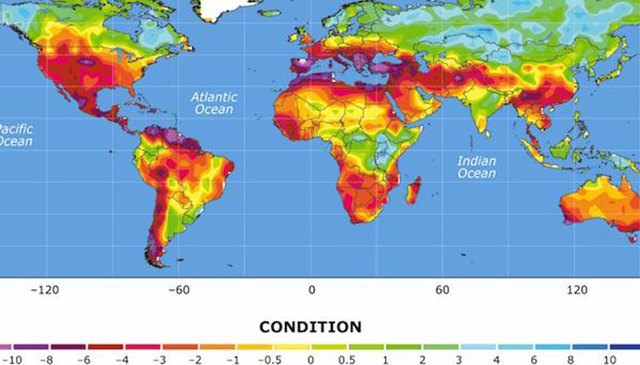 Prepared by scientists in Boulder, Colo., at the National Center for Atmospheric Research, the map projects drought conditions worldwide at mid-century as a result of global warming under a “moderate emissions scenario.” Areas marked at -4 and lower represent “extreme drought.”

I can’t say I found a coherent portrait of drought-driven reshaping in Plumer’s post, but there were a few provocative points about droughts past, present and yet to come:

Given that climate change might already be making drought more likely, U.S. farmers will likely need to adapt no matter what else is done. A 2009 paper by John Antle of Montana State University went through the research on this. By 2030, farmers in the U.S. corn belt and Southwest are expected to see significant losses, which could be partly offset by gains up North. (Antle estimated the overall drop in U.S. agricultural production to be quite modest, between 4 percent to 13 percent.) Keep in mind, however, that drought projections seem to be growing more severe in recent years. So the economic impacts could be higher.

Save for the briefest of linking blurbs in MidwestEnergyNews, I find no mention in media hereabouts of this piece of enterprise journalism from the Post’s Juliet Eilperin last week:

The White House recently modified an Environmental Protection Agency proposal to limit soot emissions, according to documents obtained by The Washington Post, inviting public comment on a slightly weaker standard than the agency had originally sought. …

Frank O’Donnell, who heads the advocacy group Clean Air Watch, cited the change as “the latest in a pattern of interference by the White House in decisions that rightly belong to EPA, based on science.” Last year President Obama pulled an EPA proposal to impose stricter limits on smog-forming ozone on the grounds that it would be costly and the rules were up for review again starting in 2013.

“If this had been a Bush administration move, every progressive in America would be screaming foul,” O’Donnell added.

Quite so. White House interference with science-based decision-making, especially in realms of the EPA, was a consistent hallmark of George W. Bush’s presidency, and an outrageous one.

This particular move doesn’t approach the awfulness level of meddling that was routine in the Bush years, but it’s still bad governance, and I don’t know which is more disappointing: that the Obama White House is also willing to manipulate rulemaking in this way, or that hardly anybody in the press seems to think it might be news.