In a cartoon loved by children everywhere, there’s a moment when Wile E. Coyote is chasing the Roadrunner so intently that he runs off a cliff without noticing he has left the ground. While he remains ignorant, gravity has no effect on him, although he does of course lose traction, and as his legs spin he looks out at us suspiciously.

Our return gaze does not reassure him, and he gathers his courage and looks down. When he sees where he is, gravity immediately reasserts itself and he plunges faster than terminal velocity to the distant desert floor, where only a tiny puff of smoke or crack in the earth marks his impact. Oh dear; foiled again.

— Kim Stanley Robinson in “Is It Too Late?” the closing essay in The Worldwatch Institute’s “State of the World 2013.”

I used to look forward to the arrival each year of Worldwatch’s new survey of planetary health. Between its covers I reliably found the bad news and the good — OK, mostly it was bad — delivered with concision, precision and a clear-eyed discussion of the options available to policymakers.

The volumes  formed a tidy little rank on my reference shelf, indispensable grist for an editorialist assigned to scribble advice on how best to embrace environmental stewardship before it was too late.

About 10 years ago the volumes acquired topical subtitles, like “Redefining Global Security” (2005) and “Our Urban Future” (2007). This year’s, published Monday, cuts to the heart of the matter: “Is Sustainability Still Possible?”

The book offers many an answer to that question, from biologists, chemists, physicists, social scientists, economists and more. The occasional glimmer of good news, the rare positive indicator, can still be found. But this is one bleak book.

Perhaps it’s some kind of indicator that the closing chapter quoted above, with its implicit requirement to point the way forward, was left to a writer perhaps best known for science fiction.

You may not want to read “State of the World 2013,” or even read much more about it. But I think you should. 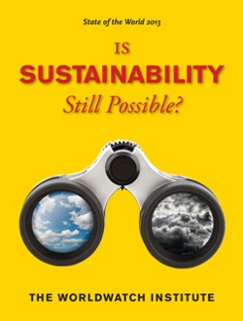 The book’s opening chapter, “Beyond Sustainababble,” acknowledges that we live in a time wherein there is a “cacophonous profusion of uses of the word ‘sustainable’ to mean anything from environmentally better to cool.”

Apart from the most egregious exercising in “greenwashing,” writes Worldwatch president Robert Engleman, the word

has morphed from its original meaning into something like “a little better for the environment than the alternative.” (But) simply doing “better” environmentally will not stop the unraveling of ecological relationships we depend on for food and health. Improving our act will not stabilize the atmosphere. It will not slow the falling of aquifers or the rising of oceans.

Worldwatch uses sustainability as a pass/fail metric — whether the sum total of our activity “meets the needs of the present without compromising the ability of future generations to meet their own needs,” in the words of the Brundtland Commission’s 1987 report, “Our Common Future.”

Note that the key word is needs  — not lifestyles nor living standards nor even life expectancy. When Worldwatch asks whether sustainability is still possible, it is asking essentially whether survival is possible for a world more or less like the one we occupy now.

On the other hand:

Moreover, economic development itself is running into constraints in many countries, as population and consumption growth inflate demand for food, energy and natural resources beyond [supplies] …

The price of resources has climbed for most of the last 10 years after sliding during the previous several decades. Results of rising prices for food, fossil fuels, minerals and necessities that rely on nonrenewable resources for their production [include] food riots like those of 2008 and crippling power blackouts like the one in India that affected nearly a 10th of the world’s population in 2012. …

[In the view of ] many scientists, we are now passing critical environmental thresholds or “tipping points.” We are starting to feel the weight of what was once balanced on Earth’s seesaw now sliding down upon us.

And so on, through a tour of fisheries in decline and new, infectious diseases on the rise, through drought and flooding and megastorms and other registers of climate disruption, to a conclusion that “it now seems pretty obvious that the time has arrived to prepare for the consequences of unsustainability.”

Those would be, like, rocketing death rates and the collapse of cities, nations, civilizations.

Although global warming is never absent from the narratives in this book, the central focus is on resource consumption and depletion. A recurring and accepted statistic is the Global Footprint Network’s calculation of Ecological Footprint, derived from worldwide measures of the acreage devoted to producing food, fiber and timber, and to absorbing the carbon produced in burning fossil fuels.

In 1961, we are told, mankind’s footprint covered about two-thirds of the earth. Today it covers 1.5 planets, and continues to expand. If all the world’s people lived like the Americans, Danes and Kuwaitis, it would cover more than four.

Absent nearby planets to colonize, what can be done to get back to “one-planet living”?

Two sustainability experts from British Columbia, Jennie Moore and William E. Rees, describe the city of Vancouver’s  efforts to become the world’s greenest city  in terms of progress toward that goal.

Theirs is an interesting, inspiring chapter about how committed, concerted effort can dramatically improve the energy efficiency of buildings, expand recycling, reduce fossil-fuel emissions, even promote healthier diets.

And it all falls short, way short, of the average 66 percent reduction in resource consumption that enlightened Vancouverites would have to achieve to return to a one-planet living standard.

Is it just too late?

So, back to Wile E. Coyote, hanging in space, at the split second of realizing he has gone over the cliff and there’s no going back. Is it just too late for us?

Kim Stanley Robinson says no, maybe not, not quite yet:

As demonstrated in this volume and other analyses … if we were to do everything right, starting this year and continuing for the next several decades — did everything that has been proposed to decarbonize and to conserve, restore, protect, replace, and so on — then we could do it.

It might involve so many actions that it would end up constituting the primary emphasis of civilization’s efforts, but that is probably as it should be. The point is, it is physically possible. …

Are we going to do everything right in the rest of the twenty-first century? No. Or, let’s say it looks very unlikely. We just aren’t that good, either as a species or as a civilization — it’s hard to tell which. …

But either way, oh dear — at least one foot is off the cliff. Could be quite a fall. Must turn quickly in a new direction.

Planet’s health surveyed by Worldwatch Institute, and the news is not good