Though it is being rolled out as “an unprecedented and comprehensive set of actions” to keep the Great Lakes from being colonized by Asian carp, the updated national strategy issued Wednesday is more a continuation of measures that could be described fairly as partial, stopgap and long overdue.

For well over a decade now, as bighead and silver carp have worked their way northward via the Mississippi River and its tributaries, the magnitude of this threat has been well understood. So has the most important single safeguard that can be adopted in response:

The Chicago Sanitary and Ship Canal, an unnatural connection between the Great Lakes basin and the Mississippi system via the Illinois River, must be closed to carp.

Because doing that effectively means closing the canal to shipping as well, this has not been a popular notion in Chicago or Springfield, where it’s often observed that the canal is just one of perhaps two dozen places were Asian carp could, theoretically, enter one of the lakes.

True enough, but the canal is also by far the largest and most direct route between the two systems — indeed, “the only known continuous connection between the Great Lakes and Mississippi River Basins,” in the wording of yesterday’s report.

Bottom line: While closing the canal cannot absolutely guarantee that the lakes would remain carp-free — especially given the possibility that some carp may already be present — without this step, no combination of other measures can offer a solid chance of success.

Even Illinois Gov. Pat Quinn seems to have accepted the inevitable, acknowledging last month that, “Ultimately, I think we have to separate the basins. I really feel that is the ultimate solution.”

Separation would be an expensive undertaking — estimates vary widely, even wildly, and most come from self-interested sources — because of the massive rerouting of freight and city sewage required.

On the other hand, a $7 billion-a-year fishery is at stake — a figure that sort of dwarfs the $51.2 million allocated toward various efforts in the 2013 Asian Carp Control Strategy Framework, and even the $200 million or so that has been allocated to the problem since the  authoring Asian Carp Regional Coordinating Committee was created in 2009.

Of that $51.2 million in new money, about half will go to expanding various partial solutions to the Chicago canal problem, including expansion of a sort of electric fence installed in the water near Romeoville, Ill., as a demonstration project 11 years ago.

Three sets of electrodes, positioned so as to annoy carp but not obstruct barges, will be used to jolt fish with voltage sufficient to discourage them from passing the barriers.

Prevailing opinion seems to be that the fences have worked pretty well, so far. However, Asian carp DNA — and one live fish — have been found beyond the barriers.

In addition to the fixed barriers, the Illinois Department of Natural Resources will get funds to build a mobile version that can be dragged behind a boat to different locations in the Chicago waterways and fired up to encourage carp to move elsewhere — kind of like herding cattle.

Other herding tools to be developed under the new plan include water guns, air guns and sound guns, all used to create carp-deterrent shock waves in the water. And there are chemical methods in development as well:

Sex pheromones can be induced through hormonal treatments.  Repellant alarm pheromones offer carp protection from predation, and aggregating pheromones attract carp to schools. Selection and location of planktonic food sources are largely based on chemical cues.

Field studies are occurring to evaluate effectiveness of chemical stimuli as attractants and repellants to aid in capture of wild carp. These studies will include controlled pond mesocosms and restricted backwater or tributary habitats using caged fish as a source of stimulus, chemical stimulus release, or feeding station approaches …

This project is also investigating use of food as an attractant to aggregate and concentrate Asian carp. Laboratory and field studies in 2012 showed that fish are very responsive to certain algal mixtures.  These “food stimuli” now are used in the field to condition Asian carp to feeding stations along tributaries of the Missouri River. These field tests will continue in 2013.  This approach may be useful to aggregate Asian carp at these stations and then remove them by another control method or more effectively deliver control agents such as toxic microparticles.

Fascinating stuff, granted. But when it comes to erecting actual new, physical barriers to carp bent on entering the lakes, the plan includes minor projects at two “potential pathway connections” — one at Eagle Marsh near Fort Wayne, Ind., where carp might cross from the Wabash River to the Maumee through a series of creeks and ditches, and another involving the Ohio Erie Canal and Killbuck Creek south of Cleveland. 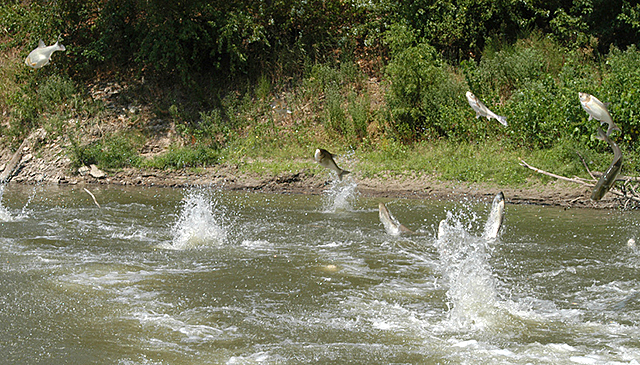 Even as the carp coordinating committee was rolling out its new program, House Republicans were busily working to slash the budget from which its $51.2 million would be funded. Excerpts from a report in yesterday’s Crain’s Detroit Business:

Federal programs designed to make headway on some of the Great Lakes’ most longstanding ecological problems, from harbors caked with toxic sludge to the threat of an Asian carp attack, would lose about 80 percent of their funding under a spending plan approved Tuesday by a Republican-controlled U.S. House panel.

The measure would hammer the Great Lakes Restoration Initiative, which has enjoyed bipartisan support since President Barack Obama established it in 2009, based on a priority list endorsed four years earlier by President George W. Bush.

It’s far from certain, of course, that these cuts will stand, or what shape the restoration initiative will have when it emerges from the sequestration deal-making in Congress.

Also, I should mention that the U.S. Army Corps of Engineers is proceeding with its own study of solutions that could include a permanent separation of the Great Lakes and Mississippi Basins at the Chicago canal. That work is way behind schedule, headed for completion in late fall or early winter this year.

Better late than never, I guess. Unless, in the end, it proves to be just too late.