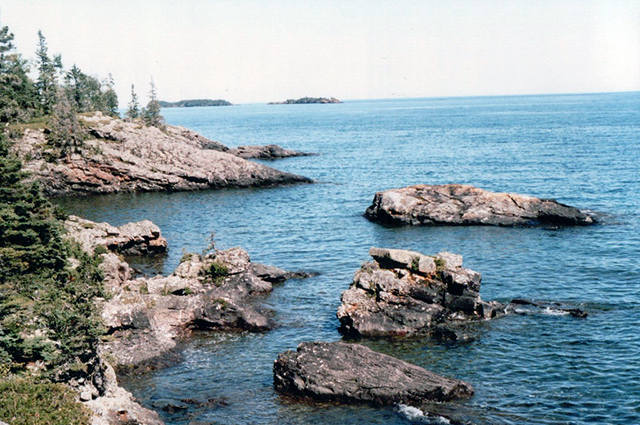 Here’s a pretty big birth announcement from the wilds of Isle Royale — the howls of new wolf pups have been heard for the first time in two years.

The island’s wolf population has fallen steadily in recent years, to its lowest known level since intensive study of wolf/moose population dynamics there began in 1958, and last year — for the first time — no pups nor other signs of reproduction were detected.

But a few weeks ago, Rolf Peterson, longtime investigator of  those dynamics, was canoeing in the island’s western reaches and heard the howls of two or three pups. He shared the news with Michigan Radio via an email published Thursday morning.

“You can tell them apart by pitch,” John Vucetich, who succeeded Peterson as director of the Isle Royale wolf-moose study, told me. “So you know if it’s just one or more than one. The difference between two and three is a little harder to hear, and with each additional pup it’s that much more difficult to know precisely. Litters of five and six are common.”

This does not mean Isle Royale’s teetering wolf population is, um, out of the woods by any means.

The births’ key significance, Vucetich explained, is their demonstration that at least one of island’s two wolf packs is “physiologically capable of reproducing, and that’s something that was not known after last year.  Sometimes it happens, when inbreeding depression is severe, that reproduction just stops.

“So to know they’re capable of reproducing is a good development — far, far better than the alternative. If there had been no pups again this year, that would have been quite something, in the bad sense.

“If we find this winter that all the pups born this year are dead, well, that would be a special kind of bad, because what matters is total abundance of wolves from year to year.”

The first six months of life are a “fragile time” for wolves, he said, and “it’s not uncommon to have a half-dozen pups born and none survive — or, on the other hand, for all of them to survive. So it’s a wait-and-see kind of a thing” until the next annual aerial survey is conducted in January and February.

In his email to Michigan Radio, Peterson underscored those points in this way:

Twenty years ago the population was in approximately the same situation, with a dozen wolves present (the difference now is that the population is lower, because of the mortality from the mine shaft incident) — only two of the three packs present were reproducing, and litter size was small.

Now we have one of two packs that reproduced (this year, no packs reproduced last year), and litter size was small.  In the early 1990s the situation was resolved by the arrival of an immigrant male with some more competitive genes, and the wolf population was strong for another 15 years.

“Mine shaft incident” refers to the discovery in May 2012 of three dead wolves — two adult males and a young female, born in 2011 — in the water at the bottom of a 19th century copper mine. These wolves had belonged to the Chippewa Harbor pack, toward the island’s eastern end; the discovery helped explain how the overall population had fallen from 12 in the 2011 survey to nine in 2012s.

By the 2013 survey the population stood at eight, and as Vucetich explained in an earlier interview, four of the eight were female, which would bode well for reproduction, but they were also middle-aged, which would bode not so well.

And while the new births may prove to be a positive change in the wolves’ numbers, they won’t change the “inbreeding depression” that Vucetich and Peterson see as the primary threat to their long-term persistence in Isle Royale’s isolated environment.

Since wolves first appeared on the island in the late 1940s, only one new wolf —the “immigrant male” mentioned by Peterson, also known as “Old Gray Guy”— is known to have arrived from the outside and introduced new genetic material to a population whose inbred deficiencies include a spinal deformity.

Whether the births will affect the timetable for settling on management responses to the wolves’ decline is another open question. Phyllis Green, superintendent of Isle Royale National Park, told Michigan Radio that the development might buy a little more time for a decision-making process that is still in its early, scoping stages.

The three main options before the National Park Service are to leave the wolves’ fate to nature without any human intervention, to reintroduce wolves if the current population dies out, or to attempt additional “genetic rescue” by bringing new wolves to the island before all the old ones are gone.

But there is considerable debate over which of these options is best. At a public forum on the issue in St. Paul last June, Peterson’s was the only voice in favor of intervention.

Like his colleague, Vucetich feels  that wolves are necessary to the island’s ecological balance, not only as a check on the moose population but also as a critical factor for the health of a third species: balsam fir.

Balance of wolves, moose — and fir

Young fir trees are the primary food for Isle Royale’s moose, which first came to the island in the early 1900s and ate their way through so much forest that by the 1940s, ecologists on the order of Aldo Leopold were advocating that wolves be imported to save the trees.

Vucetich told me that in the first decade of this century, the moose population fell to its own low point in nearly 60 years of study, and balsam firs across the western two-thirds of the island were growing to heights that would put them safely beyond the moose herd’s reach for the first time in 100 years. Allowing wolves to die out — even briefly— could quickly reverse that recovery, he said:

If the decision is to let the wolves go extinct, well, it would take a year or two of study after extinction to be sure it had occurred. Then it might take another couple of years to decide on whether to reintroduce them, and the best way of doing it.

There might be a year or more of bureaucratic delays, and the first attempts at reintroduction could end in failures and have to be repeated. It could easily be a 10- or 12-year process, on top of the last two years, in which the moose population is uncontrolled.

Genetic rescue is the best option, in Vucetich’s view (and now Peterson’s, though he earlier favored reintroduction), because it avoids that break in wolf predation on moose.

And, as Vucetich pointed out,  this option could preserve specific benefits that may be present, along with deficiencies, in the current packs’ genetic makeup.

“There’s some reason to think there’s value in those genes that have been developing through 15 generations on Isle Royale, as wolves have adapted to its unique conditions. And if we let today’s wolves go extinct, that will be lost forever, too.”

For a more detailed look at the “genetic rescue” option, see this discussion (PDF) that John Vucetich has shared with MinnPost readers.

Howling pups show Isle Royale wolves are reproducing, but not out of danger