Most people who follow news of America’s honeybee predicament know by now that the new insecticides known as neonicotinoids, or neonics, are widely agreed to be playing a key role in the massive die-offs of these critical pollinators.

That may not be the worst of their unintended consequences. A new and, so far, little-noticed report pulls together the findings from more than a decade of scattered studies to show how these same insecticides are harming the untargeted insects, worms and other organisms that provide natural pest control in agriculture and beyond.

This meta-analysis is the work of the Xerces Society for Invertebrate Conservation, a respected organization based in Portland, Ore., with field offices in St. Paul as well as California, Nebraska, North Carolina and New Jersey.

“Beyond the Birds and the Bees: Effects of Neonicotinoid Insecticides on Agriculturally Important Beneficial Invertebrates” came out last week to little press attention I can find; I spotted a passing reference in a Sunday story in the Toronto Star about Canada’s continuing problems with collapsing honeybee populations.

Some of Xerces’ key points:

Not an anti-pesticide campaign

The Xerces Society is not an anti-pesticide group by any means; its study last year on the problem of neonics and honeybees was far more nuanced and balanced than some partisans on these issues might prefer. Its namesake is the Xerces Blue butterfly, a California species that went extinct in the early 1940s and is probably the first U.S. butterfly to vanish because its habitat was lost to development.

The society’s special focus is the protection of species that, in the main, lack the charismatic appeal of butterflies or honeybees: The 97 percent of all animal species —insects, worms, clams, starfish and hordes of other creeping, crawling, buzzing, tentacled things — that happen to make do without a vertebral column. Courtesy of the Xerces Society
The surging popularity of neonics since their emergence in the mid 1990s has begun to create resistance in some pest species.

And its main point about neonics, I think, is that current practices are well-meaning but uninformed, wasteful and kind of dumb.

Billions of dollars are spent every year in the United States on measures to control agricultural pests, but these expenses would be exponentially larger without the free, and typically overlooked, pest control provided by beneficial predatory and parasitoid arthropods (a phenomenon known as “biological pest control.”)

The economic value of biological pest control in the United States provided by wild beneficial insects is conservatively estimated to be at least $4.5 billion annually [citations omitted; the paper is available here]. This is likely an underestimate; for example, in soybean in just four states (Iowa, Michigan, Minnesota, and Wisconsin), natural suppression of soybean aphid is worth $239 million a year. …

There is a growing body of evidence that beneficial insects are exposed to neonicotinoids through a number of pathways. … In addition to direct contact with neonicotinoid spray, invertebrates that chew plant tissues, sip plant fluid or chew into wood will consume some amount of the active ingredient. Residues are also present in pollen and plant exudates.

Contaminated talc or dust released into the air from seed planters can contact flying insects. Residues can also contact invertebrates in the soil or in water. Effects of exposure may include death; sublethal effects that reduce reproduction, foraging, and longevity; or indirect effects such as a loss of prey or hosts. 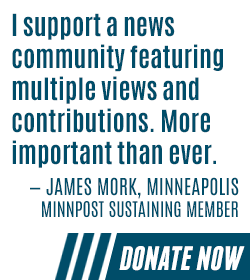 Perhaps the society’s main policy point is that current use of neonics undermines the Integrated Pest Management strategy that is supposed to be the foundation of modern pesticide practice — a strategic approach that maximizes natural factors, minimizes chemical application and tailors solutions to the problems they’re intended to address:

In the United States, it is the policy of federal agencies, including the U.S. Department of Agriculture, to use IPM in management activities or promote IPM through regulatory action. Following the basic tenets of IPM, control measures are instituted only after a regular surveillance program and/or a field history of pest damage determines that pest impacts have risen to an economically damaging level.

When action is taken, the ideal approaches focus on the pests while doing minimal harm to nonpest organisms. There are many successful examples of this approach in agriculture, including in apple, citrus, and greenhouse crops.

But with neonics, the supposedly greater safety and ease of application have pre-empted that process, on the assumption that these new insecticides would stay put, do their job and fade away. Evidence is mounting that it just doesn’t work that way.