Shortly after Tuesday’s piece on wildfire risk went up, I heard from a reader who wanted to know more about the firefighting costs that are incurred in the western United States but borne by all taxpayers.

It didn’t take long to find an excellent recent analysis of those costs, and of the factors driving them: a warming climate, forestlands made abnormally vulnerable through a century of fire suppression, and — especially— continuing expansion of residential development in the fire zone.

“The Rising Cost of Wildfire Protection,” published last June by Headwaters Economics of Bozeman, Mont., is the work of Ross Gorte, who does not lack for expert credentials or life experience. He holds a Ph.D. in forest economics, with a special focus on fire, and has worked for the U.S. Forest Service, the Congressional Research Service, the congressional Office of Technology Assessment and the National Forest Products Association.

A tripling of federal outlays

Here are some of his key points about costs: 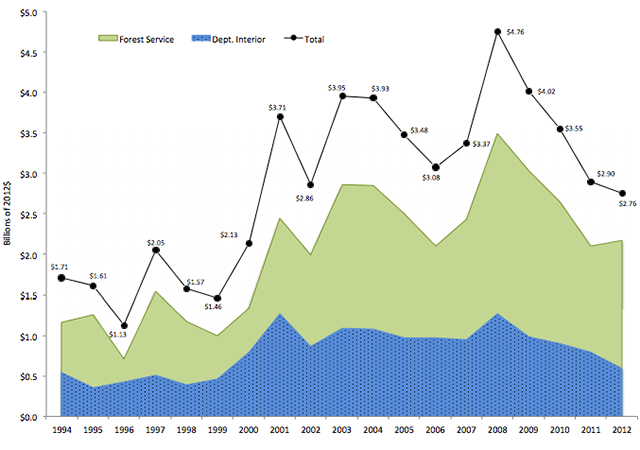 Courtesy of Headwaters Economics
Federal Wildfire Appropriations to the Forest Service and Department of the Interior, 1994 – 2012.

In one sense these rising costs are the unavoidable consequences of a changing pattern of wildfire in the West, a relatively recent but steady shift toward larger and hotter fires over a longer season each year.

Continuing its analysis of the 2002-2012 period as compared with historical trends, the report notes that “The past decade has seen the six worst fire seasons of the past half-century, with three of them — 2006, 2007, and 2012 — exceeding 9 million acres.”

(And that observation actually understates the trend a bit. Looking at Gorte’s source statistics compiled by the National Interagency Fire Center, I found that the worst eight fire seasons since 1960 have occurred since 2000; that in each of these eight years, more than 7 million acres burned; and that, prior to 2000, the record includes only one 7-million-acre year, 1963.)

But the larger driver, really, is the continued expansion of residential development into the forest’s edge, at the zone known as the wildland-urban interface. This expansion

[I]mposes direct and indirect costs on the federal agencies in wildfire control efforts and in fuel reduction treatments… Federal wildfire suppression policy explicitly states that protecting human lives is the priority, and that protecting private property and natural resources are equal as the second priority.  However, the political reality is that protecting people’s homes is given priority over protecting lands and resources.

The Government Accountability Office (GAO) has noted that structures adjacent to federal lands can significantly alter fire control strategies and raise costs, because protecting structures commonly requires additional, special firebreaks and because fire managers often rely on expensive aircraft to drop fire retardant on and around the structures. In a survey of FS land managers, some estimated that 50 to 95 percent of firefighting costs were attributable to protection of private property [my emphasis added].

In addition to forcing the U.S. Forest Service, in particular, to fight or fight more intensively fires that might draw a more relaxed response if not for all those houses in the way, construction in the fire zone undermines prevention efforts in a number of ways:

These transfers are made without direct congressional approval — a facet Gorte notes is “relatively rare among federal agencies” — and the accounts that are raided are of many different kinds. Some financed Forest Service training of private landowners in better forestry practices, or homeowners in better fire protection and prevention measures.

Others paid for land acquisition, road and building maintenance, recreation and wildlife habitat programs, and — perhaps most perversely— for “fuels reduction” to remove the 100-year accumulation of tinder that makes so many of today’s fires so intense.

Gorte says an argument can be made, although he does not make it himself, that current firefighting practices may encourage development in the wrong places by making the fire zone seem safer than it really is. Also, that FEMA’s willingness to cover disaster costs may ease the pressure on insurance companies (and their state-level regulators) to see that people building in the fire zone pay a fair premium for the risks they are creating.

What can be done? Very little, it would seem, as long as development in the fire zone is left to the whims of landowners and the self-interest of local governments that benefit from its enlargement of the tax base.

Gorte calls for expanded public-education programs such as Firewise, which can help willing homeowners take inexpensive, sensible steps to protect their places from fire, as long as they’re willing to push natural beauty back to a safe perimeter (experience has shown, alas, that many are not).

Other options, my emphasis added:

States could be encouraged to work with the insurance industry to authorize higher insurance premiums for houses in the WUI.  The federal tax code could be modified to reduce or eliminate the mortgage interest deduction for houses in the WUI.  Federal, state, and private funds could be used to acquire easements that could be managed to provide a firebreak/buffer for WUI communities.  Federal fire control efforts or funding assistance could be withheld from state and local governments that do not sign firefighting cost-share agreements…

Finally, unilateral federal action to reduce WUI fire costs may be feasible.  A national wildfire insurance program, akin to the National Flood Insurance Program, could be required for all construction in the WUI that has a federal nexus (e.g., permit approval, financing assistance) or for post-fire disaster assistance.

And in that last idea you can see reflected the fundamental lunacy of how we govern development in the wildland-urban interface:

We don’t let people build in flood plains, and if they build in areas near a flood plains we make them take out special insurance. But let them clear a little patch and put up a palace in a tinderbox of western forest and we stand ready to protect their bad judgment no matter the cost in federal dollars. Or, for that matter, in firefighters’ lives, of which 33 have been lost this season in the last count I saw.

“Eighty-four percent of the WUI in the West is not yet developed, but the housing market is picking up and the climate is warming, And what is everyone doing?  Teaching folks how to continue to build in harm’s way.

The full text of Ross Gorte’s research paper can be read or downloaded here.

If you’re interested in the continuing story of Isle Royale’s wolves, I recommend a fine recent piece in The Nature Conservancy’s blog, and not only because it says nice things about MinnPost’s coverage.

What we all pay for fighting wildfire, and saving homes built in harm’s way