An interesting new study of “energy sprawl” takes a look at the probable land-use impacts of current production trends in the region of the Marcellus shale formation — both natural-gas fracking and wind projects — and draws a pair of interesting conclusions:

The study, published earlier this month in the journal PLoS One, is the work of two ecologists on the Colorado staff of The Nature Conservancy: Jeffrey S. Evans and Joseph M. Kiesecker. They look beyond the typical impacts most often associated with both fracking and wind development — groundwater withdrawals, say, or migratory bird deaths — to consider some broader consequences flowing from mass construction of drill pads, roads, pipelines and so forth.

The result, they claim, is the first research to “examine a comprehensive build out a scenario for potential impacts associated with both shale gas and wind development across the entirety of the Marcellus Shale gas play,” which includes portions of New York, Pennsylvania, Ohio, Maryland, Virginia and West Virginia.

In addition to its promise as a source of shale gas produced through fracking, they say, the Marcellus region is prime territory for wind development because it contains extensive areas of mountaintops and ridgelines in proximity to some of the largest metropolitan areas of the Northeast.

That same geographic factor, however, means that the Marcellus sprawls across watersheds identified by the U.S. Forest Service as “among the most important in the country due to the amount of drinking water they produce” and the populations dependent on that water.

Indeed, they write, “impacts from energy development in the Central Appalachians could lead to a decrease in watershed condition and potentially affect the quality of surface water (including drinking water resources) for up to 22 million people.” That would include the metropolitan populations of New York City, Pittsburgh, Philadelphia and Washington, for a few examples.

Overall, they say, “36 percent of the predicted energy expansion in the study area is expected to occur in watersheds that are among the top 25 percent nationally in terms of water importance, also representing intact forests with high biodiversity.”

Drawing on a range of data, Evans and Kiesecker conclude that current trends point to development of up to 106,004 new gas wells and 10,798 new wind turbines, creating up to 1.5 million acres of newly impervious surface to accelerate runoff and sedimentation. Some 1.2 million acres of forest could be cleared, too, with gas-related projects having their greatest impact in lower-lying areas and wind development being most significant in mountain ridge habitats.

Given that U.S. energy consumption has increased by 50 percent in the last 50 years and is likely to increase by another 50 percent in the next 15 or so, the tremendous pressure to develop the Marcellus region’s resources is unlikely to abate.

However, Evans and Kiesecker say, it is possible to reduce some of the impacts by designing projects differently. And this is their bias, if you want to call it that: As principal scientists in The Nature Conservancy’s “Development By Design” initiative, they accept that development is going to occur but suggest  that smart development is better than dumb development.

Here’s the nub of their argument, lightly compressed to remove citations and some figures:

In contrast to traditional gas development, shale gas is developed with multiple horizontal wells that can reach out 1,524 meters or more from one well pad. The well pads are typically more expansive, the water used to fracture wells is much greater, and the supporting infrastructure is much larger in scale.

While the larger pad, greater water use, and more extensive infrastructure pose more challenges for conservation than shallow gas, the area “drained” by wells on each well pad is much larger than from shallow gas pads (200–400 hectares  versus 4–32 hectares) since there are typically multiple lateral wells on a shale pad versus a single vertical well on a shallow gas pad. 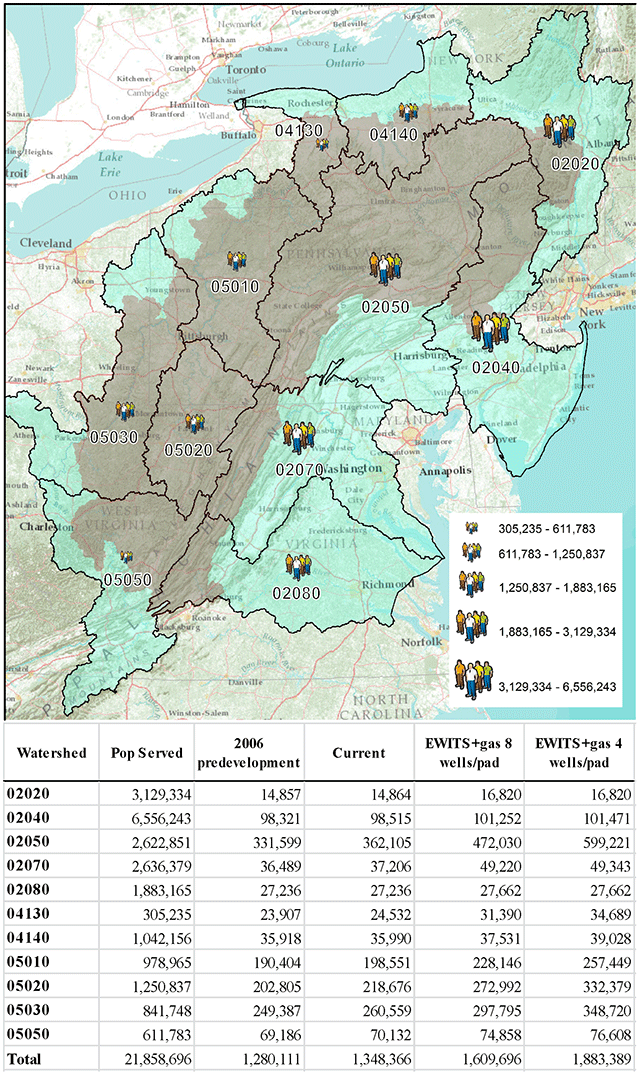 Source: PLoS One
Study area with basin-level watersheds and population served, labels correspond to the watershed number. The interior polygon shaded in brown represented the subwatershed-level watersheds that intersect the high pressurization area that defines our study area. The inset table represents population served for each watershed, impervious surface for 2006 baseline, current and two scenarios. The hectares are specific to the given impact and are not cumulative. For total impacted area under a scenario, add baseline, current and scenario.

The nature of wind turbines places stricter limits on siting alternatives, they acknowledge, and it may not be possible to mitigate impacts on a comparable scale without deciding to simply build wind resources outside the Marcellus region. Still,

Developing wind energy on disturbed lands rather than placing new developments within large and intact habitats would reduce cumulative impacts to wildlife. There is over 14 times the amount of wind energy potential on disturbed lands needed to meet the U.S. Department of Energy’s goal of generating 20% of the United States electricity with wind.

Despite the extensive wind resources across the U.S., the states comprising the majority of our study area (WV, PA, VA,) are unable to meet DOE projections within areas already disturbed. In these states wind energy potential is largely restricted to ridge tops, which often make up the heart of the last remaining intact natural ecosystems.

What stands in the way of smarter development over the dumber kind? I think we all know the answer to that one: Siting decisions with regional impact are still made on a project by project basis, whether it’s a natural gas field or a wind farm or, for that matter, a precious-metals mine proposed for Minnesota’s north woods.

Unfortunately assessment of environmental impacts are made well by well or gas field by gas field with little or no attempt to assess cumulative impacts. Scenarios and scenario analysis have become popular approaches in pursuit of sustainable development. However, they are little used, at least in any formal way, in environmental impact assessment (EIA).

Fostering the use of scenario modeling, like the approach outlined here, can allow regulators to examine the potential consequences of development objectives quickly and inexpensively. We conclude by encouraging EIA practitioners to learn about the promise of scenario-based analysis and implement scenario-based methods so that EIA can become more effective in fostering sustainable development.