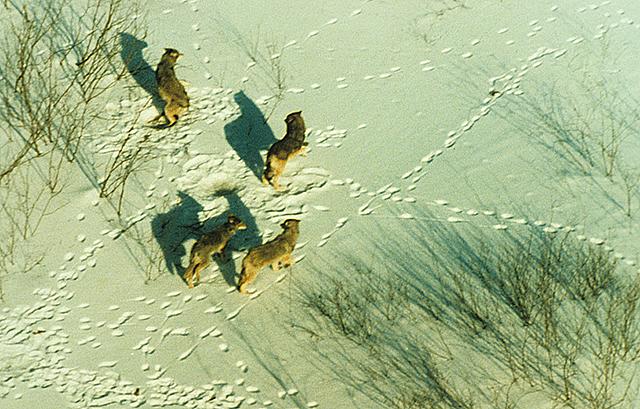 CC/Flickr/Wisconsin Department of Natural Resources
It’s probably fair to say that wolves are by far the biggest headache that Fish and Wildlife has been handed under the Endangered Species Act.

It’s too soon to tell, I guess, whether this month’s decision to take more public comment on federal wolf protections will change the policy eventually adopted by the U.S. Fish and Wildlife Service.

But if you’re inclined to believe, or even just to hope, that sound science still has a role in such decisions — well, this embarrassing episode may be worth a closer look. The picture you’ll see is not pretty.

It’s probably fair to say that wolves are by far the biggest headache that Fish and Wildlife has been handed under the Endangered Species Act. Wolves have had ESA protections for four decades now, and for more than half that time the service has been working actively to shed its responsibilities for these worshipped and detested predators, battling an assortment of national groups at every turn.

What looked like maybe the last of those turns came in June, when FWS announced its plan to end protection of gray wolves throughout the remainder of the lower 48 where authority hadn’t already been turned back to the states.

However, such delisting decisions are legally required to be rooted in the “best available science,” and here the service had a problem: Its primary foundation for this delisting was a single paper laying out a fairly controversial re-classification of wolf species.

One species or two?

That paper, by Steven M. Chambers and three others, came down squarely in favor of seeing North American gray wolves as being of two types:

Plenty of other wolf biologists and animal geneticists think that question is far from settled — and more than a few actually think it has been settled in the opposite direction of Chambers’ conclusion, with all gray wolves belonging to just one species.

The science of these things is complex and technical, as you might expect, rooted in DNA mapping and requiring judgments as to whether DNA differences detected among wolves are permanent or temporary, results of evolutionary divergence or interbreeding convergence, and so on.

But if the differences at the molecular level are tiny, at the policy level they could hardly be larger.

The gray wolf has Endangered Species Act protection until FWS can prove it’s no longer needed; “eastern gray wolves,” if they exist, have never been protected and presumably never will be, since virtually all of the territory that would be considered their natural range has been wolfless for a long, long time.

In another policy decision that has brought sharp criticism recently, FWS has chosen to define the “natural and historic range” of a threatened species as whatever territory it occupied at the time of being listed for protection — not its historic territory. Some critics see this as an effort to rewrite the ESA by recasting its most important definition.

There were some other problems with the Chambers paper, too:

FWS claimed at the time that it had no role in the picking and unpicking, but a reporter for MSN News turned up an email in which the three were told by the contractor that, “I understand how frustrating it must be, but we have to go with what the service wants.”

The only way out of the ensuing embarrassment was to halt that review and arrange for a second, this one to be undertaken by five scientists chosen without the service’s knowledge or involvement, and their work was released earlier this month.

It happens that one of the five, Robert Wayne of UCLA, was also among the three bounced from the first panel. But as the panel’s report puts it:

[W]e did not avoid selecting reviewers who had previously made known their personal (as opposed to scientific) opinions on the issue. This distinction is important; it is entirely possible for a scientist to have a strong opinion on policy or a proposed action, but also for that scientist to make an impartial assessment on (for instance) the precise genetics or taxonomic techniques and data that were used.

In any case, the five were assigned to give no thought to the policy aspects of the delisting proposed by FWS but to consider only its scientific basis for making them. And its conclusions are rather stark:

As for the ultimate question of whether gray wolves and eastern gray wolves are likely proven different species or the same species, the report says “this is an area of active scientific research with new scientific studies being published several times a year. In fact, research papers that are in preparation or in review/in press right now could significantly alter the current conclusions drawn by Chambers … and the Service.”

If that’s the case, you have to wonder why the rush at Fish and Wildlife — unless it was just possibly to reach a policy decision before the science was settled in its disfavor.

Public comments on the delisting rule will be taken until March 27 and can be made online here; some 30,000 people have weighed in since June, which tells you something about the passions swirling around the issues.

The review panel’s report can be read here [PDF].

I should note that no foreseeable outcome of this review is likely to help legal efforts to overturn previous delisting of wolves in Minnesota and elsewhere, because that decision was made on the basis of their comprising distinct populations of wolves, not separate species.

Also: FWS’s proposed delisting would extend new endangered-species protection to the Mexican red wolf in New Mexico, Arizona and part of California, while protections for a small population of red wolves in the southeastern United States would be unchanged.