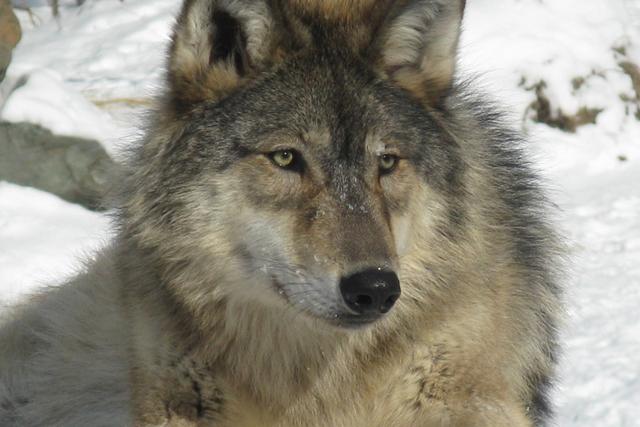 CC/Flickr/Sakarri
Being a lone wolf doesn’t necessarily mean being lonely, you know.

(Update: One week after this post went up came news that the wolf nicknamed Isabelle by Isle Royale researchers had been found dead, of undetermined cause, on the Minnesota shoreline after leaving the island by ice bridge. And now a piece written to be funny, light-hearted and admiring is anything but funny, and my heart is anything but light. If I had some way to unwrite it now I would. I hope the admiration still shows.—Ron Meador )

Twice this winter, the bitter cold that has halted shipping across Lake Superior has also created temporary ice bridges across the 20-mile channel between Isle Royale and the Minnesota-Ontario mainland, raising the tantalizing possibility that once again wolves could either leave the island or arrive on their own four feet.

Isabelle was born in 2008 to one of the two packs on the island, but, as wolves often do, left the pack in 2012 to find a mate. The pickings are few — and all the males are related to her. That inhibits mating in wolves as well as people,  [researcher Rolf] Peterson said.

Because she wears a tracking collar, the researchers have been able to follow her lonely and persecuted life. Last year they saw three other wolves chase her to the edge of the water and attack her with all the ferocity they use to bring down a 900-pound moose. They left her wounded and bleeding on the edge of the ice. When the researchers left last winter, they weren’t sure if they would see her again.

Of course, the ice bridge is a risk as well as an opportunity. The Isle Royale wolves “could decide to go to Thunder Bay and take in a movie and maybe mate with somebody” and never return, [logistics coordinator Carolyn]  Peterson said. When an ice bridge last formed, in 2008, two wolves went missing permanently.

— From “Cold weather has an upside, if you’re a grey wolf or whitefish,” Toronto Star, Jan. 30.

It never hurts to have a friend in the National Security Agency, and it was a surprisingly simple matter for “Snowman,” as I’ll call him here, to sift through a mountain of cell-phone data and find the signal from Isabelle’s radio collar. She was indeed in Thunder Bay, having breakfast at the Hoito, whose hostess was kind enough to pass her the house phone. Excerpts from our interview:

I’m having the scrambled eggs with Finnish sausage AND ham AND bacon. Clabbered milk, coffee — kinda weak — no pancakes. I’m hoping my waitress can get the kitchen to make up a Finlandia burger to take with. But lunch doesn’t start for another couple of hours and I’ve got miles to go, people to see.

By “people,” of course, I mean wolves. Hopefully. I’ve seen enough people the last few days to last me a long damn time.

For five years  I’ve been hearing the legends about Armando’s tenderloin, Armando’s bolognese, Armando’s piccata. Finally I get up here and I’m a year too late. Cripes.

I’d already decided to get the osso buco. Moose is great and all, but I want some veal just once before I die, and they say he served a nice, thick slice of shank.

Really wanted to see his paintings of Pinocchio, too. They were supposed to be special. Oh, well.

Excuse me, but that’s a little too personal a question, even though I know our breeding patterns and reproductive success are all over the news lately.

Suffice it to say, I’m 5 years old now and the clock is ticking. It wasn’t easy last spring to hear somebody else’s new pups howling at twilight.

My problem with the males on IR isn’t only that we’re cousins, kind of, or that they’ll probably pass on the spinal deformity. The problem is, these guys are animals, even by wolf standards. Genetic depression hasn’t driven down their testosterone levels, that’s for sure.

So there’s a lot for me to consider, and here’s one thing that never ceases to amaze me about you humans: Either you imagine us to be emotionally kind of like people, only living in the woods and wearing fur, or you assume we’re totally instinctive and can’t make even the simplest calculation of our own best interest.

Here’s another:  How you can’t seem to remember that you’re just animals, too, and that most of your decisions are as instinctive and selfish and shortsighted as ours, with a pretty coating of rationalization applied afterward. Tell me I’m wrong.

Case in point: You want to pretend Isle Royale is some kind of virgin wilderness, despite having been logged and mined, despite having Park Service hiking trails and camping shelters and  more visitors per square mile per year than any other national park in the system.

And though we’ve only been on the island since the Korean War, you want to make sure wolves are always on IR, by almost any means necessary — not because we “naturally” belong there, but because we help keep the moose and the fir forest at the balance you prefer. And because you want the chance to see or hear one of us up close.

Of course we’ve been following the big debate about whether we should be allowed to go extinct for a while, or given some kind of “genetic rescue” DNA boost by you all importing some fresh wolves to the island.

What I’d really like to see? Somebody’s map of all the past human interventions that the new interventions would balance out. If that’s the idea.

Frankly, it’s both amazing and amusing that you seem to think you can control our future through a little tinkering from time to time. That you can step in and imitate nature when nature doesn’t perform on your schedule.

I’m not saying you shouldn’t try to send over some fresh wolves — but not from the Detroit Zoo this time, OK? It could work, sure. Pick the right ones and they could fit in just fine.

Pick the wrong ones and we’ll unpick them for you. We’ve done it before.

My point, I guess, is that maybe you should be a little less concerned about predicting what’s going to happen or not happen with the ice bridges this year and instead focus on why they’ve only formed in three years out of the last 17, where they used to form about three years out of every four.

You know why, of course you do, but what are you doing about global warming? Just about nada.

Let’s face it, the long-term trends for our happy little world of IR are going to be driven by disrupted natural cycles that will reduce your tinkering abilities bit by bit, year after year, until the end of time, unless you finally get serious about climate change.

We’re not holding our breath over there.

Am I going back to the island? Yeah, I think so, and if I meet up with some other good wolves around Thunder Bay I’ll make the pitch that Isle Royale is a pretty sweet place for a wolf these days. I don’t have to worry about stepping on a steel trap or into the rifle sights of some nimrod who wants my winter coat for a wall hanging. The island’s still pretty wild, in a good way, despite all those things I said before.

And I hope you won’t quote me on this, but we actually learn some stuff about ourselves from the work that Rolf and Carolyn and John [Vucetich] and their predecessors, like [David] Mech have done. Wolves have a lot of great skills, but measuring the seroprevalence of parvovirus is, like, just a little tricky for us.

You know that expression,  “It’s a dog’s life?” We use it, too, but for the opposite meaning — how soft the average dog has it. I’ve seen a lot of dogs in the lap of luxury this trip, but that kind of life, well, they can keep it. Soft is for other canids.

Being a lone wolf doesn’t necessarily mean being lonely, you know. There are big advantages to being part of a pack, sure, but negatives, too. And some pluses to going it alone, so long as you’ve got the chops to bring down your own moose from time to time. I happen to like squirrels and voles just fine, too.

And when I get my chance at one of the thugs who came after me last year, I’ll hand him his you-know-whats to wear for earrings, count on it.

OK, gotta go now, they need the phone back. Sorry to have to cut this short.

I had an iPhone 4 but I lost it on the ice coming over. I’m heading over to the Intercity Centre to pick up a new one and I’ll call you later if I can. When’s your deadline?

And what are you hearing about how long the ice is supposed to hold?