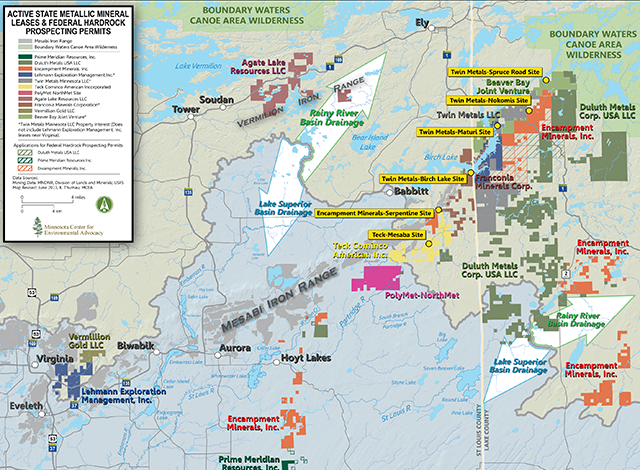 First of an occasional series on copper/nickel mining in northeastern Minnesota.

A huge project to mine copper and nickel in Minnesota’s north woods is gathering steam, promising to reshape the Iron Range region’s economy for generations — while also posing potentially serious threats to the surrounding canoe country’s watery environment and outdoor recreation industry.

If that sounds like the opening to yet another piece on PolyMet Mining Corp. and its NorthMet project, please read on, for my topic today is Twin Metals Minnesota and its vision for precious-metals production that would dwarf PolyMet’s ambitions in every respect: scale, duration, economic impact and environmental concern. Consider:

While PolyMet’s operations lie within the Lake Superior basin, and regulatory documents say any acid drainage they create would move toward the Great Lakes, Twin Metals’  holdings are within the watershed of the Boundary Waters Canoe Area Wilderness (BWCA), Voyageurs National Park and Ontario’s Quetico Provincial Park.

And some are at the edge of the BWCA itself.

Yet Twin Metals’ plan for a first, underground mine at its Maturi site along the Kawishiwi River, on a scale that has been likened to an underground city, may be the biggest mining project you’ve never heard of — unless you happen to be an avid reader of industry publications, investor reports, community newspapers from the Arrowhead  or environmentalist websites like MiningTruth.org.

Even there, the focus is most always on PolyMet, whose NorthMet project has attracted intermittently intensive attention statewide throughout successive stages of planning, regulatory review and public debate.  Twin Metals is typically mentioned in passing as just one, or next up, among the “other projects waiting in line” — sometimes, the sense is “waiting in repose” — while PolyMet’s fate is determined.

Next in line, but not napping

But Twin Metals is hardly napping. Bob McFarlin, the company’s vice president for public and government affairs, brought me up to date in conversations over the last week:

There’s one other key difference between Twin Metals and PolyMet, and you can hear it reflected in a sort of backhanded compliment that mining skeptics and opponents sometimes pay McFarlin’s outfit: While PolyMet is a mining company that has never actually operated a mine (and is derided, usually off the record, for fumbles in shepherding its NorthMet project), Twin Metals is a joint venture of Duluth Metals and Antofagasta, a Chilean conglomerate with extensive experience in copper mining, railroads and related activity.

And that makes it a more formidable foe for those who have started environmental protection efforts. 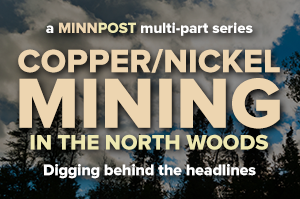 There was a little flurry of feature stories about Twin Metals last summer. At about the same time the company cut the ribbon on its new building in Ely, a new, two-part protection campaign was launched by Ely-based Northeastern Minnesotans for Wilderness (NMW).

Its Boundary Waters Watershed Campaign is a coalition effort to fight all mining in the watershed of the BWCA, while Sustainable Ely seeks to prove that outdoor recreation industries are a better bet for the region than mining ventures whose fortunes rise and fall with global metals prices.

The principal architect of both is Becky Rom, daughter of the late Ely outfitter Bill Rom, who did as much as any individual to make the Boundary Waters a worldwide destination for wilderness paddling. After a long career as a lawyer in Minneapolis, and national involvement with conservation as a member of The Wilderness Society’s governing council, she has returned to Ely after retiring from the Faegre firm but not from the fray.

NMW’s new efforts differ from previous Minnesota opposition to mining projects, it seems to me, in four significant ways:

Here is its rationale, excerpted from a statement Rom supplied to me by email:

Sulfide mining is dangerous. It has never been undertaken without serious and irrevocable environmental damage. The proposed mines in the Boundary Waters watershed represent a tremendous and potentially unacceptable risk to one of the most unique and precious natural resources anywhere in Minnesota and in North America.

We believe that the most prudent course of action is for the federal agencies involved in the management of our public lands to undertake a comprehensive assessment now of the ecological risk to the Boundary Waters and adjacent region if sulfide mining were to occur.

In the meantime the land management agencies are proceeding with mining approvals without knowledge of the ecological impacts that would result. We believe that is a failure of land stewardship and not in accordance with the laws that govern the nation’s natural resources.

In Bob McFarlin’s view, it’s simply wrongheaded to consider all mining projects as identical, and to oppose a Twin Metals project that hasn’t been prepared, let alone proposed. He stressed to me that the underground Maturi mine would have some inherent advantages over PolyMet’s open pit that ought to matter to mining opponents:

We believe our underground project provides some great environmental benefits. There’s a much smaller impact to surface for the whole mining operation, plus we have the ability to backfill and store more than half  of our mine tailings back underground into the mine.

Protection of groundwater and surface water, seeing water in general as a serious issue, is something we all can agree on. That’s what the environmental review process is for, and that’s why we’re proposing to invest tens of millions of dollars in our own study of hydrogeology in the region.

And he finds the notion that federal agencies should undertake a comprehensive assessment of all mining before contemplating permits for any mine especially offensive:

We really support the environmental impact statement process, the regulatory process — it’s there to do its job, and most importantly it provides multiple opportunities for the public to look at project details and make their feelings known.

What’s really frustrating at times is when organizations will try to go the route of stopping the projects before they have a chance to be vetted in the public processes. That denies citizens and communities the opportunity to see what’s really being proposed.

In Rom’s view, “this is not just about one mine, or two. This is about the creation of an industrial corridor of mines, mills, roads, rail lines and all the rest at the edge of the Boundary Waters, and in some of the best loved places for outdoor recreation and wilderness experience across the national forest.

“We are talking about a massive, mining industrial complex that will last for hundreds of years. It is the gravest threat the Boundary Waters has ever faced.”

A potent argument, but I think it’s plain this campaign faces an uphill fight, starting with competition for an uninformed public’s fleeting attention. As Jackie Halberg, now in her fourth week as campaign coordinator, told me on Monday from her office in Duluth:

“Even here, at the edge of mining country, all anybody talks about is PolyMet. Hardly anybody in Duluth has even heard of Twin Metals.”

Meet Twin Metals, and the biggest north-woods mine you’ve never heard of