Most discussion of mining in Minnesota, she said, has focused on the PolyMet project, which is considered to be in the Lake Superior basin; its contamination would flow toward the big lake if not fully captured and controlled. And that needs to change.

The nature of the rock [that would be mined] is that once exposed to air and water, it forms sulfuric acid and leaches toxic metals. This happens all over the world, and it has never been done once, anywhere,  without polluting water.

Forty percent of the watersheds in the Western United States are polluted by hardrock mining, which is classified by the EPA as the nation’s most toxic industry.

And in northeastern Minnesota, most of the proposed mining (separate from PolyMet’s NorthMet project) is actually within the Boundary Waters watershed — “by my estimate, 85 to 90 percent. People aren’t paying attention to this, and you need to learn about it, and pay attention to it, right now.”

Those comments by Rom, a longtime Minneapolis lawyer and wilderness advocate who grew up at the edge of the Boundary Waters as an outfitter’s daughter and has now returned to Ely in retirement, definitely got the attention of the 100-plus people gathered to hear an Earth Journal panel discussion of the environmental risks and regulatory challenges presented by copper/nickel mining in the north woods.

So did observations from co-panelist Scott Strand, a longtime member of the state attorney general’s staff who now heads the Minnesota Center for Environmental Advocacy, that Minnesotans can’t realistically expect state and federal regulators to protect the state’s natural resources from the environmental degradation associated with mining. 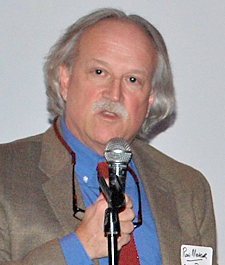 In the case of PolyMet — the only proposal so far to reach the stage of project design and review — the federal role is limited to the U.S. Army Corps of Engineers’ review of wetlands destruction issues, while the U.S. Forest Service is involved primarily because the PolyMet mine would be on land that is now within the Superior National Forest.

(And because federal law prohibits an open-pit mine like PolyMet’s in the national forest, the service is seeking to trade away the 6,000-plus acres where PolyMet holds mineral rights in exchange for other lands that would be added to the forest elsewhere.)

At the state level, Strand said, the principal regulatory role is fulfilled by the Minnesota Department of Natural Resources, which struggles with a dual role of both regulating and promoting mining projects, “and I don’t think they would deny that. They acknowledge openly that they have a conflicting mandate.”

I used to represent the DNR, for years, when I was at the attorney general’s office, and the DNR is in that unique position of being tasked to promote as well as regulate mining. That’s what their statute says. (This brought the evening’s only, and faint, “boo” from the highly civil audience.)

More than that, it’s the culture of the agency. They see it as a central part of their mission.

There’s also a financial component. The DNR is not just supposed to promote mining, it’s supposed to make money from mining. When mining takes place on state land or state mineral interests, the DNR collects the royalties, and they have a fiduciary obligation to try to maximize those revenues.

You add to that the fact that their budget is controlled by members of the Legislature who are from the Iron Range and are very much proponents of these mining projects. You add to that the problem that the information that’s needed to analyze these projects comes from only one source, and that’s the companies. There’s an absolute reliance on the companies for all the data that goes into the review.

Some people call that regulatory capture.  I just call it the facts that are on the ground. The DNR is under a lot of conflicting pressures.

This would be a good place for me to point out that last night’s program was not intended as a pro/con forum on whether Minnesota’s mining projects are a good idea or a bad one, whether they should go forward or be rejected, and so on.

Everybody understands that those are large and complex questions with many arguments to consider, and by “everybody,” I include Becky Rom, Scott Strand and yours truly. Many genuine forums have been held to debate the big yes-or-no questions on mining, and many more will follow.

But last night’s narrow focus was on just one part of that territory — a deeper look at environmental risks and regulatory challenges. That subject was the favorite by far in an informal event-planning poll of Earth Journal’s supporters and readers, who not surprisingly have an especially intense interest in environmental protection and the conservation of natural places.

Like a similar public-affairs program we held last February on climate change’s emerging impacts in Minnesota, most of last night’s event was devoted to a question-answer exchange with members of the audience, some of whom broadened the conversation to questions of jobs and economic development. A few highlights:

To a question about where the minerals processing would take place, and what impacts that might have, Strand said  that “to be fair, there have been improvements” in PolyMet’s project plans over the last 10 years. But the issues over processing aren’t about the advanced hydrometallurgical methods the company says it will use, but about the tailings left behind in various pits.

He added: “One thing you do hear sometimes from the PolyMet folks, which I think is really unfortunate, is that they’re going to be doing this on a brownfield, and  that this is basically an environmentally positive thing because they’ll be cleaning it up.

“The mine’s not going to be in a brownfield. It’s going to be in an area that’s never been touched before, in a complex of very high value wetlands. The only thing that’s a brownfield is a processing plant —they’re going to try to re-use the old LTV/Erie Mining buildings for the rock crushing. “

To the question of whether mining opposition in Minnesota was just NIMBYism, and whether we don’t have an obligation to produce our own precious metals in the United States, under stricter environmental safeguards than other countries apply:

“There is not a single mining company that is saying it won’t mine in Zambia or Chile or any other place if it’s allowed to mine here,” Rom said. “That choice isn’t being made. They’re mining everywhere. So it’s a false premise to say we have to sacrifice our waters, our landscape, our air to save Third World countries that regulate it even less.”

“In America, we care about our land, our water, our air, our human health, and this is probably the worst place in America to put one of these mines because it is such a water-intensive environment. Deserts are better. Hate to say that — it’s somebody else’s back yard — but this is a bad place.”

And what about job creation?

Mining would create new jobs, Rom said, but forecasts for mining employment at PolyMet have fallen from 450 jobs for 40 years in the company’s first promises to 300 jobs for 20 years today.

The mining industry is experiencing “an intense amount of pressure on increased productivity, especially in areas of low-grade ores like we have. Employment numbers in copper/nickel mining dropped 71 percent over the last 40 years, while production dropped 30 percent.

“Mining jobs do pay well,” she said, “but there are fewer of them as time goes on.”

“The outdoor recreation industry employs 18,000 people in northeastern Minnesota, and delivers billions of dollars to the local economy,” she added. “All of that would be put at risk.”

Like Earth Journal? Support it by helping MinnPost raise $7K by this Thursday, Feb. 13. Click here to donate.