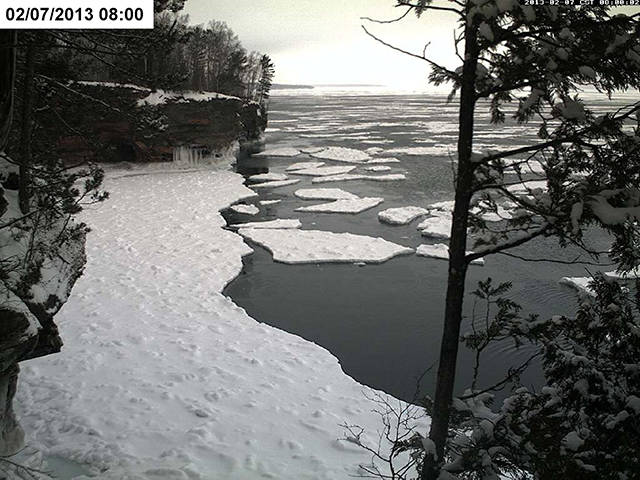 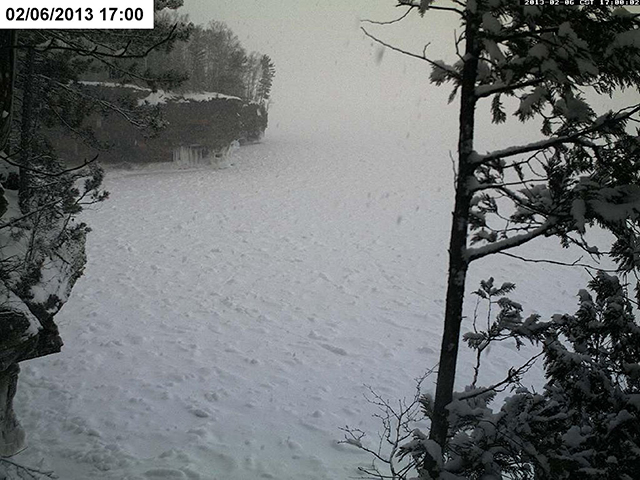 wavesatseacaves.cee.wisc.edu
Two images from the webcam that monitors the Apostle Islands caves, captured just 15 hours apart in 2013, show how quickly ice can break up on Lake Superior. Click the image to transition to the next.

Since Jan. 15, when he opened a path  over frozen Lake Superior to the mainland ice caves, Superintendent Bob Krumenaker has seen his Apostles Islands National Lakeshore experience a tourism swarm that is like a giant flash mob in its social dynamics, and not unlike a forest fire in its management challenges.

Everything got so big so fast that it's still an open question how the great winter visitation of 2014 will affect the park in the months and years to come, financially and otherwise. It's an open question, too, how frequently accessible ice caves will return in future.

I talked with Krumenaker on Monday about how the ice is assessed for safety at the beginning of the season and also at the end — which turns out to be much more complicated —and about other aspects of the Apostles' extraordinary winter season. Excerpts from his comments follow.

We monitor the ice every year when it starts to look good, and we have some fairly rigorous protocols for thickness, strength and stability.

We require eight inches for young, good condition ice. It has to be locked in between the point that's near Cornucopia, and Eagle Island, for two solid weeks without any change. And we want additional thickness over certain depths before we'll let it be accessible. 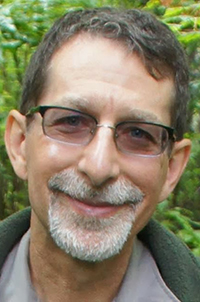 Ice like this used to be common, almost every year. We've gone from that to, in most years it's not happening at all, pretty quickly.

There's not really enough data to establish the long-term trend there, but the decline in ice formation here is consistent with what we're seeing elsewhere on the lake. And certainly the projections for the next century are dire.

I feel pretty comfortable in the statement that the ice caves are an endangered national park experience.

On whether it goes with a bang, a whimper, or worse:

There's at least three ways that this can end. The best way is for the ice to break up quickly and overnight, and our limited experience suggests that might be the most common way, but that's totally anecdotal.

You know we've got that camera that looks out on the ice. It was put there to monitor waves in the summer for kayakers, and it takes hourly photos during daylight. Look at Feb. 6 and 7 of last year and you'll see a fascinating change in which the ice totally disappeared between the last photo of Feb. 6 and the first photo of Feb. 7.

We were within half an hour of opening the ice route last year because all of our indicators were all met — thickness of ice, locked in, stable for two weeks — and at 8 a.m. on the 7th we were in my office, ready to press the button to send out the press release. And at 8:15 one of my staff calls and says, have you looked at the camera? And it had broken up overnight.

That's the breakup that we want this year, so that everybody can say, Omigod! No ambiguity about whether it's safe or not.

The worst scenario is, the same thing happens but it happens during the daytime on a Saturday. That's the one that's most scary in terms of how many hundreds or thousands might be out on the ice when it starts cracking. The public service agencies are beginning coordination to be poised for what would be a fairly major and dangerous rescue scenario.

And of course we have no experience to know what are really the indicators — do you hear something cracking? do you have enough time to get off? — because no one's ever been out there under this scenario.

The third scenario, and potentially the most likely one, is that it doesn't break up from a big storm or wind event, it just gradually erodes in strength. As ice ages it loses strength, and as it warms it loses thickness. So, we're working on determining how we'll close it when it's no longer strong enough.

On protecting people from themselves:

Inevitably there would come a point when we feel access should no longer be permitted. But how do we keep people off the ice when it looks "OK" to them?

I have the authority, with the stroke of a pen, to make it illegal [to go out on the ice after a closure]. But that's certainly not my first preference, to make it a crime or something, write people tickets.

So here's where social media could maybe be our friend. The moment we make a decision we can spread it out there really fast.

On the financial fallout:

The first two weeks of this operation, we were covering all of the costs ourselves and it was very, very impacting. With the fiscal cliff and all that, we had come into fiscal 2014 thinking it would be the tightest budget year we'd ever had, and our plan was not to plow the road to Meyers Beach even if the ice was good.

But our partners stepped up right away — the town of Bell, which is where Cornucopia is, offered to plow the road to Meyers Beach if the caves could be opened, and the Friends of the Apostles group and the Bayfield Chamber of Commerce asked us, Well, what do you need in order to staff the caves?

At that point, I didn't anticipate the need for 18 portable toilets.

They were good to their word but after a couple of weeks we were all wondering, my God, how big is this really going to get? And finally I was able to get the support of our regional director who recognized just how big this is. So the costs of  [rangers and specialists brought in from elsewhere] are being borne by our regional office.

Apart from salaries and overtime for permanent staff, which they can't be used for, the extra fees taken in at Meyers Beach will cover a lot of the extra costs. And we've gotten a lot of donations. The friends group has an anonymous donor whose company, amongst other things, makes toilet paper, which it gives free to the park — a good thing because we've already used three times our annual quota of toilet paper.

There will be some residuals that I don't think I can ask the regional office to pay for, and don't know if the fees will cover.

The stairs at Meyers Beach, which were not in good shape at the beginning of winter, have taken a big hit and need to be rebuilt. Odds are the grounds are taking a hit, too. They're under snow, but with a hundred thousand people walking on that snow, and the plowing, and those portable toilets — I don't know what it will look like when the snow leaves but we may need to do some grading and seeding.

People on Facebook and in the community have been remarkably positive about the fees — in fact, some people have said, why aren't you charging more? Which I think is pretty unprecedented for national park managers to hear.

On what he'll remember best:

This has nothing to do with the weather, or the ice. It has to do with the unprecedented pulling together of the park and other agencies — local, state, tribal and federal — the community, the tourism industry, the businesses. ...

I've never been part of anything in any national park I've ever worked in where people felt they were all in it together and they were all pulling in the same direction.

And people are happy! They come back at the end of a long day at the caves, and they're smiling and we're getting a lot of thanks from people, and I think that's been infectious for our staff. So now they're smiling and being even better at customer service and support than they would have been otherwise.

It's one of these positive spirals that are so rare, and I'm just hoping we can leverage this good feeling for a lot of other things that are more mundane. And I'm pretty optimistic about that.

And a lot of people have now learned how cool this place is, both the community and the park, and we hear them saying say, hey, I want to come back and see what it's like here in the summer.

But it has been physically exhausting, and we look forward to a little bit of respite between winter and summer.

We don't really have spring up here, you know. As soon as the ice goes we put our boats in the water and start doing our work on the islands whether there are people here or not.

Further information about visiting the ice caves, including important warnings about inherent danger and necessary preparations are available here.

Apostles chief says ice route may go out with a bang, a whimper or worse