I wasn’t able, alas, to attend Mike Clark’s recent talks in the Twin Cities about how a smart, strategic alliance of environmental and business groups was able to kill a sulfide mine at the edge of Yellowstone National Park.

But I caught up with him via videos, of which at least two are still available for viewing, and found his presentation to be of likely interest to most anybody concerned about the copper/nickel mining proposed for Minnesota’s north woods.

Until his retirement last fall, Clark was longtime head of the Greater Yellowstone Coalition, a collaborative of more than 100 environmental, recreation, tourism and business groups with a shared stake in the health of the Yellowstone ecosystem, and a shared mission of protecting natural resources in the region surrounding America’s first national park.

The 10-year fight that GYC led to stop the New World gold mine at Yellowstone’s northeast corner ended in 1996 with a negotiated buyout of the mining company’s interests and its repair of some damage already done. It ranks as one of modern environmental history’s biggest victories against a hardrock mine in a bad place.

Becky Rom of Northeastern Minnesotans for Wilderness, which sponsored his lecture tour,  introduced Clark for his talks and described GYC as “the largest conservation group in the interior West.”

Certainly its successful approach to coalition-building and collaborative advocacy is widely envied — if not emulated — by other organizations devoted to protecting wilderness and public lands. It may not be coincidence that Clark’s early organizing experience was not in the environmental movement but with civil rights in the South and poverty in Appalachia.

For many years now, there’s been a lot of talk but little progress on the notion of building a collaborative along GYC’s to advocate for the best long-term stewardship of the northern Minnesota region that includes the Boundary Waters Canoe Area Wilderness, the Superior National Forest, Voyageurs National Park and, across the international border, the Quetico-Superior wilderness.

Clark titled his talk “Yellowstone Is More Precious Than Gold: Lessons From the New World Mine Battle.”

And although he drew few direct parallels between the key issues in that campaign and those currently simmering in Minnesota, he didn’t necessarily need to:

Saying no to compromise 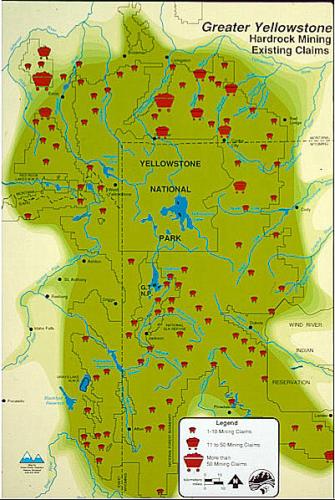 Courtesy of Mike Clark
Mining claims, most now abandoned, in the vicinity of
Yellowstone National Park.

The first and perhaps most important strategic decisions reached by GYC and its allies were that a sulfide mine in this location could not possibly be “mitigated” — that is, operated without significant and lasting damage from acid drainage — and that therefore no compromise was possible.

Moreover, Clark said, there was concern that the relatively compact, underground mine proposed by Crown Butte was probably just an opening wedge:

Beneath the gold was a huge deposit of copper. So while we fought it as a gold mine, we knew that if the mine went in, it would become a copper mine — an open pit mine, almost certainly, and very much along the size of the Butte pit [the mining catastrophe also known as the Berkeley pit].

Once the company began preparing an environmental impact statement, with notice to the Forest Service that it would seek a permit to mine, the campaign put together a team of technical experts to challenge the project at every stage of review.

One little irony of this case is that both Yellowstone National Park and the nation’s primary law on hardrock mining were established in 1872, and

We knew that under the 1872 mining law, the Forest Service would have no choice but to grant the permit, because the mining law says that if the company says the deposit is viable economically, they have the right to mine it and see if it works. So although the Forest Service calls this a permitting process, or a review process, it’s not.

In addition to the technical team, legal team, media-relations team and a collection of local grassroots organizations who could speak about the tourism businesses, jobs and recreation opportunities that the mine would threaten, the campaign worked quietly to speak directly to other mining companies and their financial backers:

We went to members of the mining industry and said to them, do you really want a mine like this on the edge of Yellowstone? What will happen to the credibility of your mining sector if the mine fails and Yellowstone is destroyed? Do you really want to deal with that?

We went to the investors, and the bankers, who were providing the capital, and we said the same thing to them: Do you really think this is a good investment? Look at what happens if this thing goes bad. Both of these maneuvers paid off in the long run.

In the end, a misstep by Crown Butte gave its opponents leverage to bring them to the negotiating table: Earthmoving equipment deposited some material into a small stream, without the permit required under the Clean Water Act, and this led to discovery of a series of problems punishable by fines in the range of $75,000 a day.

At that point, the New World Mine began to attract overdue (and eventually unfavorable) attention from elected officials in Montana and finally in the Clinton White House at the beginning of the president’s second term.

Eventually, the campaign got Crown Butte to agree to abandon the project in exchange for cancellation of its fines and a $65 million payment from the federal Land and Water Conservation Fund, of which it was required to spend $25 million on site reclamation and allowed to keep the other $40 million as reimbursement of development costs.

In the Q&A that followed his talk, Clark was asked if he thought Crown Butte engineers knew how serious a risk the mine would pose to the environment, and his reply struck me as charitable:

People who mine are focused on the technical challenges they face. They genuinely believe they can handle whatever is generated in that mine…. So I would give the miners a sense of fairness about that. They were focused on the ore body and how to get it out as quickly as they could. They believed they had put together a viable program.

Asked about what it took to gain support for the campaign from elected officials in Montana and beyond, Clark said that, initially, the likelihood of getting a favorable hearing increased with the particular official’s distance from the mine site.

County officials, for example, couldn’t seem to think much farther than short-term job creation,  until they finally realized what was actually at stake:

“We said, prove to us that you can do this without harming Yellowstone. They couldn’t.”

Asked how tactics of the New World Mine could be adapted to locales less iconic than Yellowstone, Clark said:

Most of the new mines that are being proposed around our country are on public lands that are so remote and so rugged that nobody’s been able to get to them before. … On the other hand, with the Boundary Waters Wilderness Area, that’s the most popular wilderness area in the United States.

It’s a very fragile area in terms of how water moves, and I think there’s great potential  for turning this into a national battle that says, this is an example of how we have to protect certain kinds of lands. …

Clark presented his talk at seven venues during his visit to Minnesota; I watched the video from his session at the University of Minnesota and another video of his appearance in Ely can be seen on YouTube. His visit to Minnesota was sponsored by the Sigurd Olson Lecture Series, a 15-year-old project of Becky Rom’s that was funded this year by Northeastern Minnesotans for Wilderness.