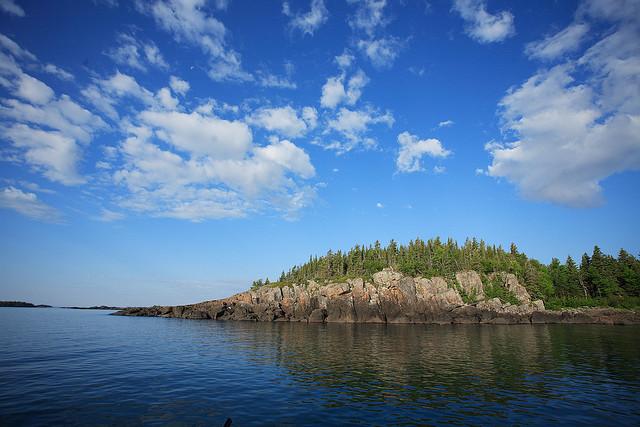 The National Park Service has decided to move Isle Royale’s struggling wolf population out of the emergency room and order more tests.

No “genetic rescue” or other intervention in the fate of the wolves, who now number nine, is on the table for at least the next several years, the superintendent of Isle Royale National Park, Phyllis Green, said yesterday. From the news release:

The plight of these nine wolves is a compelling story, but we are charged with a larger stewardship picture that considers all factors, including prey species, habitat, and climate change, which could, in a few generations, alter the food base that supports wildlife as we know it on Isle Royale.

[T]he park will respond to Isle Royale’s currently low wolf population through a comprehensive planning process that considers management of wolves, moose, and vegetation on the island. … The park will develop a management plan addressing the many complex factors that affect persistence of Isle Royale wolves and their role in the island ecosystem, including relationships with moose (their preferred prey), the condition of island vegetation and the effects of ongoing climate change.

Scoping for that planning process is “expected to begin in the fall,” according to the announcement, and Green told the Associated Press that it will probably take “about three years.”

However, the announcement also says, “If the island population of wolves declines to all males or all females and if the moose population grows to over-browse island vegetation, bringing wolves to the island remains an option.”

And so, in the wording of the news release’s headline, Questions Remain for Wolves of Isle Royale National Park.

The case for intervention

Rolf Peterson and John Vucetich, who conduct the 56-year-long study of wolf/moose population  dynamics on Isle Royale, are not commenting for the moment on Green’s decision, but both had been pressing for earlier intervention.

Peterson, who led the study longest, initially advocated for letting the current wolf population die out and then be replaced with wolves carefully selected and imported from other places. In a panel discussion of the issue last June, he explained that strategy as the probable best option for avoiding a repeat of the genetic depression that has resulted from generations of inbreeding on the island.

However, he was persuaded to the view advocated by Vucetich, who now leads the study, that it would be better to attempt “genetic rescue” — placement of a few imported wolves on the island to improve the gene pool right away.

For both men, a prime concern of the moment is neither wolves nor moose but a third critical species in the Isle Royale ecosystem: balsam fir, which was there long before the arrivals of moose, at the turn of the last century, or wolves, who turned up around 1950.

Moose browse so heavily on fir that ecologists, including Aldo Leopold, were advocating for deliberate placement of wolves on the island, as a control on the moose population, for decades before the first wolf arrived.

Thanks to wolf predation, Peterson said, fir trees on the western two-thirds of Isle Royale were growing to heights that put them safely out of reach of moose. This meant the fir forest had its first chance in a century to actually reproduce and expand, he said.

Phyllis Green also spoke at last June’s session and said that the National Park Service had already formed a couple of panels of experts to discuss wolf genetics and climate change, and expected to start a formal decision-making process by last fall.

She also made clear her own view that Isle Royale’s unique value lies at least partly in its “spectacular isolation” from other ecosystems and their influences. She noted that the island’s history is marked by the constant appearance and disappearance of species, of which moose and wolves are but two examples.

Since then, the wolves have gained at least a little ground and the timetable for decision-making has lengthened.

In August came news that Peterson had heard the howls of wolf pups born that spring, following a year in which — for the first time since Isle Royale study began in 1958 — it appeared no pups had been born.

Vucetich said this shouldn’t be taken as a sign the wolves were out of danger, but acknowledged that he and Peterson were encouraged by the demonstration that the wolves were “physiologically capable of reproducing, and that’s something that was not known after last year.  Sometimes it happens, when inbreeding depression is severe, that reproduction just stops.”

Green said the development also gave her management team a little more breathing room as it sorted out the options, and at an informational meeting in St. Paul last November, she said there were no longer any timelines for coming to a decision.

Since then, the news from Isle Royale has been good and bad. Peterson and Vucetich completed the annual winter survey, conducted on the ground and from the air, in February and preliminary reports are that the wolf population stands at nine while the moose population may have doubled in the past three  years.

(A tenth wolf, nicknamed Isabelle, left the island over a temporary ice bridge and was found dead on the Minnesota shoreline in early February. She had been shot with what Green described as a low-powered pellet gun; the pellet struck her in just the right spot, passing between two ribs, to do mortal damage.)

At the November meeting, I asked Green about the researchers’ argument that Isle Royale’s isolation offered a unique opportunity to test the strategy of genetic rescue.

She acknowledged that there was some appeal to that notion, but underscored her feeling that the wolf/moose or even the wolf/moose/fir balance was only a part of the larger picture that should be considered in a rigorous scientific review.

After a half-century of study, she said, only about 40 percent of  the population dynamics of moose can be solidly explained. And then there are the beaver to consider…

Not just a science question

And while scientific questions are the ones that get the most public discussion when the subject is Isle Royale’s wolves, other factors are also in play and were acknowledged in Green’s statement that the decision announced yesterday is “a way forward [that] is supported by our review of the best available science, law and policy.” (emphasis added)

Isle Royale is managed not only as a national park but as a wilderness area, under a body of law that limits human manipulation. Green told me last June that apart from the reintroduction of wolves to the Yellowstone ecosystem — to remedy a plain example of human eradication — she knew of no other instance in which managers of a federally protected wilderness had attempted an intervention on the scale of the one she was being asked to consider.

So the Isle Royale issues were getting considerable attention at higher echelons of the National Park Service, she said.

She didn’t say, and didn’t have to say, that any decision to intervene in the fate of the island’s wolves could end up in court as well.