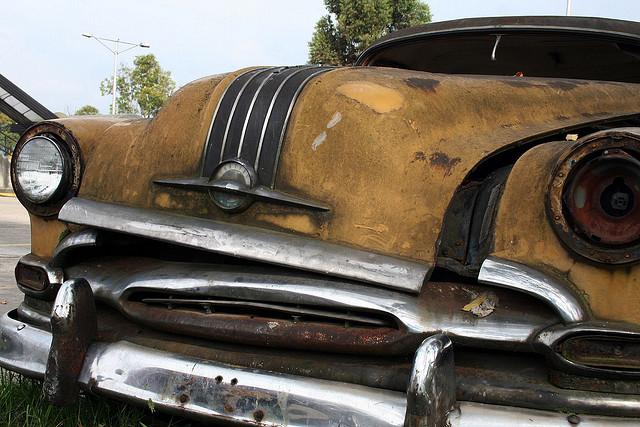 Americans' century-long love affair with the automobile is a many-sided and much-studied thing, and the research does not lack for complexity and contradiction.

Lately, many of the trend lines have seemed to be going down, but the reasons for those shifts are much debated — tough economic times? more telecommuting? baby boomers slowing down? twenty-somethings preferring buses and bikes? So is their likely longevity.

Sometimes data are cited that make it look like driving is still on the rise. Moreover, it can be hard to distinguish the thrust of a set of research findings from the ambitions of the sponsoring advocacy groups.

Against that background, a new report released from the University of Michigan on Tuesday stands out quite sharply. It finds probably permanent reductions in Americans' rates of vehicle ownership, fuel consumption and miles driven per year, the three components of what author Michael Sivak calls "motorization."

His analysis attributes our declining motorization to several factors, while insisting that economic conditions cannot be the primary force behind them.

And because they issue from a research program whose primary funding comes from the auto industry, which no doubt would prefer to see American motorization trending ever upward, the  findings would seem to carry additional credibility.

The study, "Has Motorization in the U.S. Peaked?" is the fifth in a series by Sivak, who holds a Ph.D. in experimental psychology and heads the Sustainable Worldwide Transportation program within the university's Transportation Research Institute.

Drawing on data from the Federal Highway Administration, the U.S. Census Bureau and ProQuest's Statistical Abstract of the United States from 1983 through 2012, Sivak shows that:

I talked with Sivak by phone on Wednesday about the new study and other research conducted in his program that might explain the underlying shifts reflected in these trends. Excerpts from his comments follow.

Source: Has Motorization in the U.S. Peaked?
Fuel consumption is down after peaking in 2003–2004.

On the overall trends

The most important finding is that there is no evidence to support the claim that maybe some of these reductions in the rates are temporary. That's the bottom line is I see it — there is no evidence that things are changing from the trend that we have observed from about 2004 on, namely a continuing decline in rates.

And I want to emphasize that I am focusing on rates, rather than the absolute numbers, for vehicle ownership, miles driven and fuel consumption.

We have an ever-growing population in the U.S., so you would expect that eventually the absolute numbers would surpass whatever peaks we had encountered in the past.

So I focus on the rates per person, per driver, per household, per vehicle — that's the interesting part, what's going on per person rather than in totality.

Economic contributions are clearly part of the explanation but they are not the triggering mechanism, and they are most likely not even the main reason.

If economic factors were the triggering point, the peaks would have coincided with the onset of the recession in 2007 or 2008 and I wouldn't have a story — everybody would say, this is just the economy.

And, yes, if economic forces were the primary driver for these changes, we would also have seen a uptick in the latest figures and we don't see that.

The larger factors are the ones I list in the report: more telecommuting, more use of public transportation, continuing urbanization and changes in the age composition of drivers.

We were actually the first ones to demonstrate, several years ago, that there is a huge decrease in licensure rate for what I would call "young adults." But not just millennials: This extends from teenagers to people about 40.

Now, at the same time, there's an increase in the probability that older people will have a license. They're more likely to retain licenses than they were in the past. But they drive less, and are less likely to buy a new vehicle, and so on.

Both contribute to the overall amount of driving. But there are far fewer driver's licenses in this younger population than there were a century ago, as they reconsider their transportation options, and 22 percent of them told us they do not plan to get a license — ever.

On why nondrivers don't

We contacted 618 people, 18 through 39 years of age, who currently didn't have a license and asked them why they didn't — and more important, what their future plans were. Was this just a deferral or are they changing their way of doing things altogether?

Thirty-seven percent told us that they were too busy or didn't have enough time to get a license. Now, that is another way of saying, I have other priorities. And that is an astounding number.

Eight percent told us they are able to communicate and/or conduct business online, so part of the decline is due to virtual contact through electronic means replacing some of the need for physical contact.

Thirty-one percent indicated they could get transportation from others; 22 percent said they were able to bike or walk, so they're in a setting where they don't need to drive.

Seventeen percent said they prefer public transportation; 9 percent indicated they were concerned about the environment; 7 percent had some disability or medical or vision problems.

So it's an interesting, complex set of answers.

On whether this is U.S.-only

We've replicated the study of changes in driver licensing in 14 other countries where data was available, and many of the developed countries have similar patterns as us.

Many of the developing countries still see an increase in licensure everywhere. In China and India, I don't expect any level of saturation anytime soon.

On the other hand, in Canada and western Europe and so on, it's likely they'll continue to see the same patterns we do.

On how the news goes over in Detroit

I think people are concerned — that's the word I would use. I wouldn't say they're alarmed.

There's saving grace in that the population is still growing, so the absolute numbers of, say, vehicle purchases will eventually surpass the levels of the late 2000s. The rates are a different matter.

I truly believe there is something fundamentally going on in our society that is causing these rates to go down. I don't think the rates of vehicle use, by various measures, will ever recover to the levels we last saw in about 2004.

Sivak's new report on motorization can be read here [PDF] and links to other research produced in his program can be found here.

U.S. ‘motorization’ may be in permanent decline, new study of auto use finds