Climate change, once considered an issue for a distant future, has moved firmly into the present. Corn producers in Iowa, oyster growers in Washington State, and maple syrup producers in Vermont are all observing climate-related changes that are outside of recent experience. So, too, are coastal planners in Florida, water managers in the arid Southwest, city dwellers from Phoenix to New York, and Native Peoples on tribal lands from Louisiana to Alaska. …

Thus begins the National Climate Assessment issued yesterday morning at the White House, a report so accessible and compellingly written that I saw no point in trying the journalist’s usual task of simplifying science. It continues:

Americans are noticing changes all around them. Summers are longer and hotter, and extended periods of unusual heat last longer than any living American has ever experienced. Winters are generally shorter and warmer. Rain comes in heavier downpours. People are seeing changes in the length and severity of seasonal allergies, the plant varieties that thrive in their gardens, and the kinds of birds they see in any particular month in their neighborhoods.

Other changes are even more dramatic. Residents of some coastal cities see their streets flood more regularly during storms and high tides. Inland cities near large rivers also experience more flooding, especially in the Midwest and Northeast. Insurance rates are rising in some vulnerable locations, and insurance is no longer available in others. Hotter and drier weather and earlier snow melt mean that wildfires in the West start earlier in the spring, last later into the fall, and burn more acreage. In Arctic Alaska, the summer sea ice that once protected the coasts has receded, and autumn storms now cause more erosion, threatening many communities with relocation.

This year’s assessment is the third in a series of reports ordered by Congress in 1990 on what was to be a quadrennial schedule. It hasn’t worked out that way: The Clinton administration took its time on the first assessment, bringing it out in 2000. The Bush administration just took a pass, leaving to President Barack Obama’s team to produce the second, in 2009, and now the third.

All three have been characterized by solid science, transparent documentation and clear-eyed, expert analysis by large panels (about 60 principal authors were convened for this edition, and they were aided by more than 250 other collaborators).

But this year’s report makes big advances in reader utility and appeal, especially in its visual style and an interactive approach that lets you chart your own path through its mass based on what particular impacts, parts of the country or other special interests hold your greatest concern. 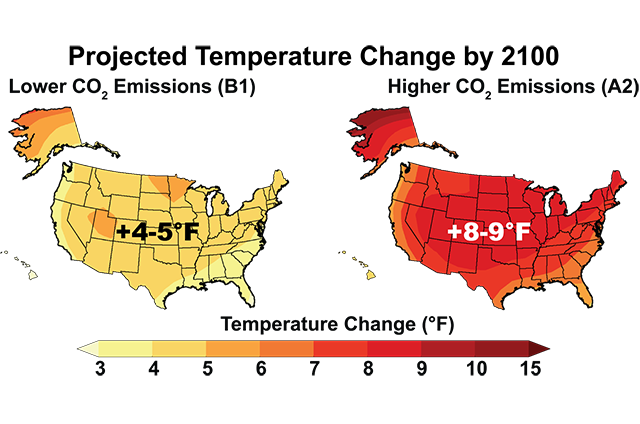 You can tell it’s a report meant to be read by the wider public, rather than merely referenced by their media gatekeepers. We can only hope this strategy pays off, because the time available for meaningful action to mitigate climate disruption — the report does not shrink from that apt and accurate terminology — is shrinking fast.

Emphasis on here and now

Of necessity the report discusses the current state of climate science and modeling, but its primary focus is, first, on the observable impacts plainly traceable to changing climate, and then on possible coping strategies. 2014 National Climate Assessment
Flood magnitudes have been increasing in Minnesota and throughout the Midwest.

Climate scientists have long spoken with confidence about the general problem of global warming, and also about possible solutions. Over the last several years they’ve been shedding a longstanding reluctance to talk about the middle piece — the linkages between here-and-now changes and complex global systems — and the report says this shift, too, represents advances in understanding.

What is new over the last decade is that we know with increasing certainty that climate change is happening now.

It is notable that as these data records have grown longer and climate models have become more comprehensive, earlier predictions have largely been confirmed. The only real surprises have been that some changes, such as sea level rise and Arctic sea ice decline, have outpaced earlier projections.

Closeup on the Midwest

As for potentially positive effects of a warming climate, the report highlights just two as it looks to the near future — longer growing seasons for some crops in some places, and longer availability of shipping conditions on the Great Lakes — and these would seem to favor Minnesotans. 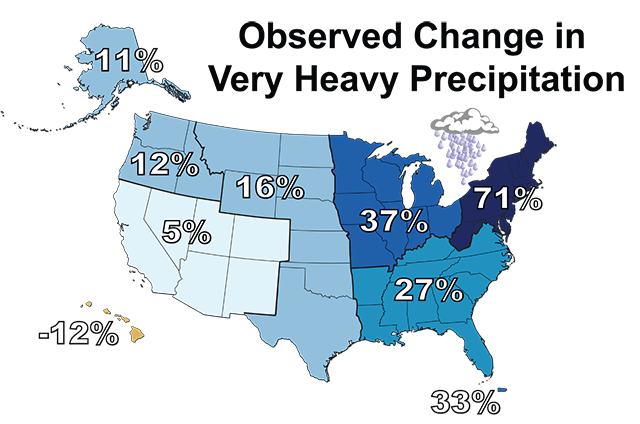 2014 National Climate Assessment
The Midwest region has been one of the most affected by increased heavy precipitation in recent years.

However, the overall impacts laid out in the report actually seem to especially disfavor the eight-state Midwest region lying east of the Great Plains and north of the Ohio River:

Other points that caught my eye in the Midwest section: