The annual survey of wolf and moose populations on Isle Royale was published Wednesday, and it’s fair to say the outlook for key elements of the island’s ecological health is not improving.

Major findings from the report:

In a way, the cover photo of this year’s report tells much of the story within: A single wolf photographed from far above, who is not running with a pack, not sharing a moose kill, but just sitting, maybe waiting, on a field of windswept snow.

Because release of this year’s report was delayed by more than a month past its scheduled appearance — held up by review as managers at Isle Royale National Park worked toward a decision about what, if anything, to do about the wolves’ decline — some wondered if the news was going to be still worse.

And in terms of one important, highly interesting research development, that may well prove to be the case. But to describe this discovery, we first need a bit of back story.

The 65-year history of wolves on Isle Royale, and much of their current predicament, is shaped by inbreeding and a steady downward spiral in genetic diversity and health, consequences of living on a rocky archipelago in Lake Superior, isolated from mainland wolves.

The island’s first known wolves turned up in 1949 or so, and until quite recently it was thought that all wolves on the island were descended from a single female and one or two males. Then in the late 1990s advances in DNA analysis detected, retrospectively, the arrival of a new wolf who came across an ice bridge in 1997 and became famous as Old Grey Guy.

Old Grey Guy’s beneficial contributions to the wolves’ gene pool were substantial, widespread and persistent. Indeed, his injection of fresh genes has served as a practical illustration of how today’s wolves might recover toward their typical numbers of about two dozen if the National Park Service would permit a “genetic rescue.”

Though the details of such a program are unsettled, the basic idea is simple: Round up some mainland wolves and drop them on the island in a mimicry of how things happen in nature, or would happen if it weren’t for a changing climate and the shrinking frequency of ice bridges from Isle Royale to shore.

This approach is strongly favored by the wolf/moose research project’s current and former directors, John Vucetich and Rolf Peterson. But it poses complicated policy and legal questions for the National Park Service, which announced last month that it would hew to a hands-off policy unless the wolves became completely incapable of reproducing, at which point it might reconsider.

Discovery about the wolves’ gene pool

Against that backdrop, the really big revelation in yesterday’s report is a finding that Isle Royale wolves’ gene pool has been freshened frequently, over at least the last 30-plus years, by wolves arriving undetected from the mainland.

This analysis draws on mathematics and a measure of genetic diversity called heterozygosity, which reflects the number of ancestors that contribute to a wolf’s DNA, or a human’s. Here’s how Vucetich explained it to me:

If both my parents have blue eyes, then my gene pair for the trait of eye color is homozygous, because the pair’s two parts, one from each parent, are identical. But if one parent has brown eyes and one has blue, then my gene pair has mismatched parts and is heterozygous. This diversity is passed from me to my children, with additional matches or mismatches from their mother, and from them to their children, and so on.

Which means that by counting and comparing the number of matched and unmatched gene pairs in a line of humans, or wolves, over generations, you can arrive at a measure of heterozygocity that reflects how many different ancestors were contributing. 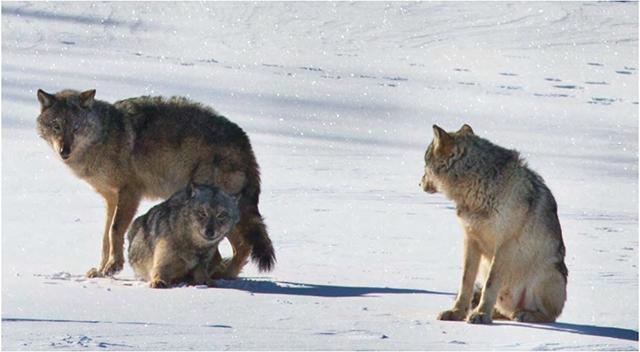 Courtesy of J. Vucetich
On March 1, 2014, the elderly one-eyed matriarch of the former Chippewa Harbor Pack stands in dominant display over her adult daughter, with her adult son viewing the action.

Fresh calculations by Phil Hedrick, a wolf geneticist at Arizona State, have shown that at the time of Old Grey Guy’s arrival, Isle Royale wolves had lost about 32 percent of their heterozygocity after not quite five decades of inbreeding. However, the expected loss over such a time period is 82 percent — more than twice as high.

What explains this? One possibility is that wolves avoid breeding with close relatives … but, nah, they’re not that picky. Another is that natural selection works against wolves that are too inbred, which certainly happens, but not on such a short time scale. So, the report says,

The only remaining possible explanation for the slower-than-expected loss in genetic diversity is that wolves have periodically immigrated to Isle Royale on ice bridges that had once been common. In particular, theory suggests that retaining the diversity that the population had would require the population to have received on the order of approximately two migrants every three generations (12-15 years).

That circumstance prompted us to review field notes from the past four decades for the possibility that undetected gene flow had taken place in the past. That review revealed several plausible gene flow events [including a pack of wolves observed in the middle of an ice bridge to the island in 1977, and the known arrival of seven or eight wolves via ice bridge 10 years earlier].

The available evidence suggests that the Isle Royale wolf population had experienced periodic gene flow throughout much of its history. The concern is that gene flow is much less likely now because ice bridges form far less frequently, due to anthropogenic climate change.

To Vucetich, this is the most important finding of the past year’s work, and only in part because it argues, in his view, for a human-engineered genetic rescue.

I suppose it might have that effect, although I can imagine, too, how policymakers could reach an opposite conclusion: If getting to a single genetic rescue a la Old Grey Guy remains difficult for the National Park Service, what about the possibility that to genuinely mimic history, the rescue might have to be repeated again and again?

I asked Vucetich why he placed Hedrick’s discovery at the top of his list, and he gave the kind of complex, personal/professional answer that always makes our interviews so rewarding for me:

There’s a certain joy in science when you have certain kinds of revelations or discoveries, and one of those is when you discover something that’s been kind of sitting under your nose all along, but then you share it with a colleague and he looks at it in a way you’ve never looked at it before.

And that discovery then causes you to think about things in another way, and lo and behold, the world is suddenly a little bit different than it was before. And for a scientist, that’s one of the greatest feelings you can experience. …

Prior to this year, we would have said things like, OK, there are fewer ice bridges and that means there’s less opportunity for wolves to come across — but there was still this lurking, unanswered question of whether those bridges were really all that important in the past, and we would have said, well, we think they must have been important, but we don’t really know.

And now we do know.