Had you told me as recently as a year ago, certainly two, that I would come to enjoy sitting at a window in the mornings and watching birds at the feeders for an hour, and sometimes two, I’d have scoffed. Not that kind of guy, really.

Except that now I am, apparently, and this has been an unexpected source of pleasure in a slow, cold spring that has made working outside a dank proposition.

Within the past week a standard steady stream of goldfinches, chickadees, nuthatches and woodpeckers — of the hairy, downy and red-bellied varieties —has been punctuated by an indigo bunting, a scarlet tanager, a rose-breasted grosbeak and a flicker.

Four flashes of tropical plumage, surrealistically bright against the dark and misty woods beyond. 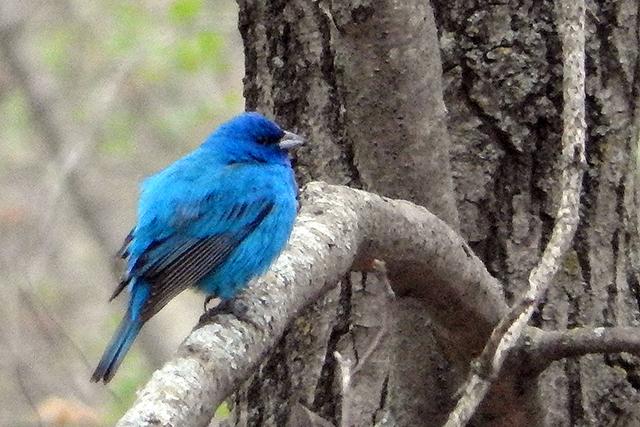 Photo by Sallie Anderson
The standard steady stream of goldfinches, chickadees, nuthatches and woodpeckers was interrupted this past week by the tropical plumage of an indigo bunting.

A few mourning doves have been hanging around, the occasional blue jay comes by, and last weekend I saw a dove-sized bird with glossy black back and wings (the portions I could see), an entirely white breast, and a rounded, blood-red head. An uncommon  red-headed woodpecker, I’m fairly confident — not because my bird-identification skills are particularly strong, but because the several guides I consulted all agreed that North America is home to only one bird with this pattern of plumage.

Had I seen his checkerboard wings in flight, it would have closed the case. But I was on my side of the glass when he lifted off his branch and rose out of view.

‘The Adventure of Birds’

I linger at the window these mornings in part for the company of the writer Charlton Ogburn and his 1975 book, “The Adventure of Birds,” which begins:

I fell in love with birds at the age of eleven and have never fallen out of it. I am an ornithophile rather than an ornithologist, though during most of my adolescence I hoped to become the latter.

Had I done so I should probably not be setting forth as I am to try to account for a lifelong ardor. I should have known too much about birds and have stood overwhelmed by all that could be said about them, and doubtless I should have regarded the human response to birds as irrelevant and distorting.

The title would hardly have occurred to me and would have put me off it if it had been suggested. What would it have meant? That birds are an adventure for life on earth to have undertaken? That the pursuit of birds is an adventure for us? (It means both, really.)

And there he had me. For it seems that I, too, have fallen in love with birds, though in the latter chapters of my life, and also reluctantly because I still suspect that birding with even moderate proficiency may require more ornithological study that I’m willing to shoulder before retirement.

I seem to be doing some anyway. Sallie, longtime birder and biggest love of my life, who accepted with grace my years of wisecracks about her scarlet teenagers, cedar spacklings and gross-breasted rosebushes, believes I have a good eye for it all — for spotting birds in the field, taking mental snapshots, classifying features and picking suspects out of a lineup organized in the Audubon guides.

(Actually I cheat and use Google, which has made bird identification one more research endeavor that any idiot can now do as efficiently as experts of the recent past. Try an image search for <bird red head white breast black back>  and you’ll see for yourself. Bird No. 3 is my sighting of the month.)

The awe of birds

Most everybody seems to think birds are kind of cool, if they think of them at all. My own grown son, who seems indifferent even to the great blue herons and bald eagles in flight, was captivated when the pileated woodpeckers came to our big suet feeder this winter. 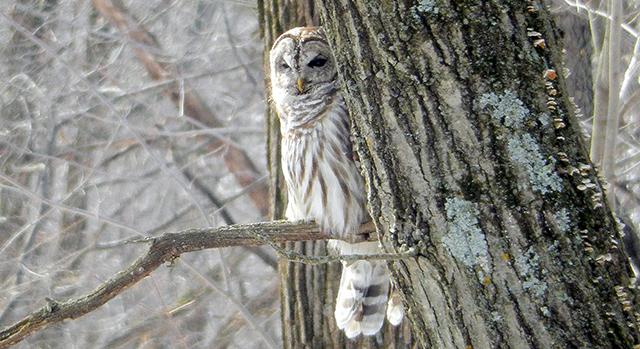 Photo by Sallie Anderson
The barred owl, ready for an ambush

I wish he’d been visiting the morning the barred owl settled in for ambush on a branch just beyond the deck, 20 feet from a couple of fans in awe of stardom.

I find that the more I learn about any bird, the more fascination I find in all of them. Their attraction for us is almost gravitational, I think, and not easily parsed.

I mean, butterflies are every bit as beautiful,  reptiles are more exotic, tropical fish are both, and captive in our living rooms or dental offices besides. Mammals are closer kin and often cuter, more readily imagined as pets.

Ogburn thinks we have associated birds since prehistory with the soul or even with God, citing imagery in the cave paintings of Lascaux. And, he says, we humans have more in common with birds than we might realize:

And both are, in their own way, rovers and explorers without parallel. Spawning salmon and eels may travel long distances and make great altitude changes, he concedes, but

None of the marine travelers, however, knows the great vistas of the earth’s varied landscapes, snowy mountains, lush dales and deserts, prairie and rain-forest. This is reserved for the flying animals and — since he first raised fabric wings upon the seas — for man. …

Birds and modern man are pre-eminent in global perspective. The curvature of the planet enters into their experience as the curvature of the hill into the fox’s. Of only one other animal — man — could such an observation as Donald Griffin’s about the extent of bird migrations be made, that it “is limited not by the capabilities of the birds, but by the size of the planet.”

Mystery of the suet feeder

A few weeks ago, as we watched birds together, Sallie said, “Um, sweetie, where’s the suet feeder?” Good question.

I went outside and found its remains scattered over the ground: steel mesh over here, wooden cap over there, other parts who knows where.

First thought was a bear had pulled it down; we’ve had problems with bears and bird feeders before. But this feeder was at least 10 feet off the ground, well out of reach for even a really big black bear, and at least 20 feet from any branch stout enough for, say, a raiding raccoon.

Even if a really skillful squirrel could have gotten to the suet, he couldn’t have hauled the feeder down. Human vandalism? Nah. …

And there the mystery stood until the morning the pileated came looking for his suet and reminded me of a scene from deep winter:

Huge pileated hanging on the feeder, gobbling suet. Big tom turkey stamping around below, bright blue in the face, craning and displaying and calculating as two dozen roostmates watch. … then jumping aloft, rising toward the feeder on great clumsy wingbeats, driving the startled woodpecker into flight, reaching for the mesh with claws at the ends of his strong bipedal legs … snatching and missing and tumbling back to earth in a comical heap, bereft.

Case closed, and so is turkey-watching season. But it was about the same time that a huge roost of robins showed up, 40 or more perching and singing in the still-bare branches, as deep into the woods as I could see, all pointing toward my window more or less.

Because I had never seen any such massing of everyday birds, apart from Hitchcock’s film, I assumed it was unusual. Then I got out the Audubon guide and learned, not for the first time, that much ordinary behavior of birds strikes us as extraordinary simply because we haven’t happened to see it before. And we haven’t seen it because we weren’t looking.

By the way, I also learned that when robins tip their heads from side to side as they bob across the lawn, it isn’t because they’re listening for earthworms, as many of us were told in grade school. They’re looking for those worms, and making the best use of their monocular vision, which gives nearly all birds (owls notably excepted) a view of the world that is crystal clear but split into separate halves.

Maybe you already knew that. If not, now you do.

Letter From Skunk Hollow: Falling in love with birds beyond the window